Nineteen years ago today, in a small Baptist church in North Ogden, Utah, two families came together to see one family's mom marry the other family's dad.  I look back on that event and wonder at our audacity to even begin to think that just because two high school sweethearts had been reunited after thirty years apart they could marry and create a happy and successful life together.  Yes, it truly was an audacious act, full of risk, for the two of us to marry.  Sometimes, in the early years when we were trying to blend two families who are totally different together, I think we asked ourselves what were thinking when we thought we could actually pull this marriage off.

Jim wanted to go to Las Vegas and get married.  I insisted that we have our families with us as we took our vows.  Since two of his children were living in Utah at the time and since my children would all be in Utah visiting their father for the summer, we finally agreed to get married in my former church home in Utah.  Since my oldest daughter was graduating from college on June 12, we decided to also get married the same day.  I joked that we would all only have to get dressed up once.
For some reason, only one photo remains that shows the two families coming together as one.  Unfortunately, it has been somewhat destroyed after sticking to the glass of the frame it was in.  But there we all are.  The groom is holding a baby while the bride holds her flowers.  We are surrounded by the configuration of children and their spouses.  The baby is Caleb, Jim's first grandchild. 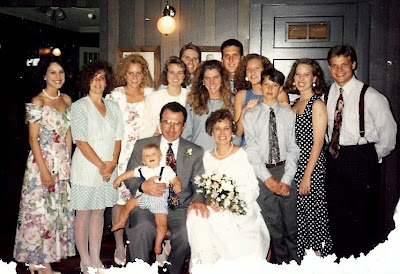 We all look so young.  Much has changed since that day.  The children have married and brought their spouses into our lives.  We've added 16 more grandchildren.  We've lost a child to death.
The two of us supported each other immensely in our careers. We've retired together.
Some may ask, what has been the secret to the success of this marriage?  For my part, I would have to say there are many reasons we have been able to create a life together that is happy, satisfying, and,  I hope, a blessing to others.  First, he is the love of my youth.  To me he will always be that young man that I fell in love with when I was only 16 years old.  He was then, and remains my true love.  I can always trust him and his character.  He has always treated me like a treasure.  I know of no other man I have ever respected and admired more on both a personal and professional basis.
Love and respect, plus a commitment to building a team and having some good laughs along the way is the secret to a good marriage.  To the young who are searching for a marriage partner, I would say: Marry a person with character.  Marry a person who treats others with respect.  Marry a person who is humble and serves others.  Marry a person who is wise.  Marry a person who has a great sense of humor.  Marry a man who honors his parents and his elders.  Marry a person who will be there for you no matter what.  I married such a man, and I have been blessed.
Happy Anniversary, Jim!  We've made some wonderful memories together, and I think we need to make more for many more years to come.  I love you.