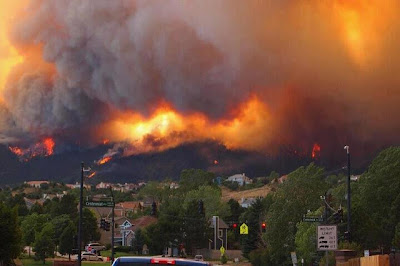 The images that came across the screen last night of the fire raging in Colorado Springs were terrifying to watch even though I saw the images via a computer screen or on the television.  Forty miles away from the fire, I was horrified and shocked at what was happing in my hometown all through the evening of June 26, 2012.  My husband and I could barely take our eyes off of the accounts of the devastation that were being recorded via the television cameras.  My children, though safely in other cities and states, were also horrified and shocked as they watched what was happening by logging onto the internet where they could watch a live stream of what we were watching on television.

Finally, at nearly midnight, my husband and I went to bed to try and sleep.  About 2:00 a.m., our puppy, Boston, now ten months old, woke us up because he was sick.  We have had him to the vet three times in the past ten days.  In fact, we had spent nearly two hours at the vet yesterday as they sought an explanation for his symptoms.   He is suffering from a bacterial infection that seems to get better, and then it comes back again.  At 2:00 this morning, after cleaning up the mess that thankfully mostly just covered his kennel, my husband and I sat on the back deck and just stared at each other.  We were too dumbfounded by all the events of the previous day to even go back to bed.  The smell of smoke filled the night air, a reminder that fires were still burning up north.  Finally, we made our way to bed.  At 4:00 a.m., Jim was back up with our sick pup.  Today, Boston spent the day at the vet's where he will remain tonight.  He is still vomiting and experiencing diarrhea.

We had to be in Colorado Springs by 10:30 this morning.  As we sat on the deck last night, or I should say early this morning, we discussed canceling our appointments.  Jim's appointment was with the cardiologist office, so we decided we needed to go.  (He is doing fine.  He is involved in a research study and must be monitored while he is on the drug that is being researched.)

Our cardiologists' office is on the top floor of Memorial Hospital in Colorado Springs, the hospital where I was born.  The views from the seventh floor of this cardiology practice are stunning as a wall of windows facing the west allows a panoramic view of the Front Range.  I always love to gaze out of the windows as I drink in the beauty of this those "purple mountain majesties" on the horizon.   My eye is always drawn to my mountain, the one that lived at the end of the street where I grew up, Pikes Peak.  I am home, I think as I peer directly down on the park just outside the window where I played on a nearly daily basis as a child. I look out over the tree tops towards the house where I grew up which is located just a few blocks west of the hospital and park.  This is my 'hood.  I was born here, and I grew up here.  I even went to church and to school within a four or five block distance from the place where I was born.

Today, I was not alone, as I gazed out the windows today.  I noticed the office personnel glancing anxiously towards the west as they went about their business.  Sometimes, they would walk over to the window, leaning toward the glass to try to get a better view of what was happening.  Patients were also looking to see what they could see of the conditions to the west.  We saw little.  North of Pikes Peak, the mountains were hidden by a dark, ominous looking cloud of smoke.  I could smell smoke within the hospital itself.    There was not any solid evidence of all the destruction that had taken place the evening before just north of Pikes Peak.   The cloud of smoke hid the damage the fire had caused beneath it.

After Jim's appointment,  we drove to one of our favorite deli's, Wooglin's Deli, which is located across the street from Colorado College.  We nearly always have lunch there when we are in town.  I ran into a friend and colleague while we were having lunch.  She had been the professor who organized a trip I took with her and other teachers to Oaxaca, Mexico in 2005.  She said she and her husband were evacuees.  They had to leave their home, located not far from the Garden of the Gods,  last night.  They hoped to return home tonight.

After lunch, Jim and I drove north to his daughter's home to check on her.  All was fine there.  We then went to my doctor's appointment in the far northeast part of Colorado Springs.  As we walked to the office from the car, the rain started to fall.  Unfortunately, I don't think this particular weather cell did much for the area where the fire is located, but it was coming down hard enough for me to grab an umbrella as I got out of the car.

One of my favorite all time women in my life is my ob/gyn doctor.  As all my friends and family know, I adore her.  Young, beautiful, vivacious, funny, smart as a whip, voted as one of the top docs of Colorado Springs, I call her my smart Barbie.  That is not a put down, and I hope it shows no disrespect.  She is smart, beautiful, and a wonderful, caring, doctor.  Many of my friends and family now go to her also.

As soon as she entered the exam room, it was clear she was suffering.  She had left her home yesterday to go to work thinking all was well.  After work, she headed to Denver for a prior commitment.  As she headed towards Denver, she learned  the area where her home is located was under mandatory evacuation.  Her home is located just a very short distance from the Flying "W" Ranch which was totally destroyed by the fire.  When I saw her this afternoon, she was still trying learn from the Red Cross if her home was still standing.  She said, "Sally, I literally only have the clothes on my back at this time.  I had to go to Target to get shampoo and such before I came to work today."  She was dressed in surgical attire.  We exchanged many hugs, I shed a few tears for her because she was standing tall, and remaining professional, but the look we exchanged as we kept locking eyes said it all.  She is devastated, worried, exhausted, and wondering what the future holds.  She didn't even know where she would go tonight.  "Come home with me," I said.  Of course that was not realistic, so I said, "Go to the Broadmoor; I hear insurance will pay for your housing."  We got a laugh out of that.  I assured her that she would come back from all of this.  She will land on her feet.  That is who she is. This fire is just getting way too personal.  It is touching people I care deeply about.

Tonight, my thoughts and prayers are with all of those who don't know what the future holds after this devastation.  My thoughts and prayers are with the fire fighters who are risking their lives as they fight this fire.  I admire and send support to those leaders of Colorado Springs who have handled this tragedy with great wisdom and much grace.  I appreciate the support so many are sending this way.  The Red Cross is doing a tremendous job of bringing in help, support, and shelter for the over 32,000 people who had to leave their homes.

The rain did fall, and that also meant the wind blew today.  Colorado Springs is located on the downslope of a mountainous range.  Storms do not produce gentle rains often.  Storms bring wind and lightening.  I have not heard if the rains have helped much yet in the firefighting effort.  I don't think the winds have stirred up too much damage.  If anything, the wind is scattering ash and embers that are traveling north and igniting small spot fires.  Helicopters are fighting these in an attempt to keep the fire from breaching the ridge that would cause the fire to burn on Air Academy grounds.  As far as I know, there have been no lightening strikes that have caused additional fires.

At times during the day, a flash flood warning has been in place because the rain could cause flooding as the water runs off  the fire de-wooded hillsides.  We need gentle rain, but that type of rain is rare around here.  I just keep hoping that every little bit of moisture we can get in the air will help a lot.  The temperatures were not as hot today.  All of that has made things appear better than they were yesterday.

Thank you all for the love, support, prayers, and kind wishes for Colorado.  Keep them coming.

On a final note, please read my daughter's blog entry.  She captured so well what I wish I could say about my beloved hometown.  Click here on: "Memories Aflame" to read Keicha's beautifully written piece.