This was the year that I was going to keep Christmas simple.  I was not going spend as much money, and I was not going to do as much decorating.  At first,  I thought we would aim at a quiet Christmas at home.  Then, I changed my mind.  I decided I really did want to go to Utah for Christmas.  It had been nearly two years since I'd been over to see the grandkids.  I did not want to miss out on seeing them all again.  Jim hates to drive over to Utah in the winter.  Despite having written a recent blog post (click on highlight to read) about not driving in the snow, I had convinced him, and myself, that we should drive the twelve to fourteen hour trip during the 2013 Christmas holiday.  I suggested we leave a window open on the date for departure and leave when the weather promised to be best.  Somehow, against his better judgement, my husband agreed to this plan.

A few days after we had made the decision to make the trip, my daughter Amy called and said that there were great airfares on round-trip between Denver and Salt Lake City on Frontier if we were willing to fly on Christmas Day.  Then, she went on to tell me she did not want us driving.  She said driving was foolish, expensive, and dangerous this time of year.  She said we needed to fly.  Of course, she was right.  Jim immediately went on line and booked our flights and rented a car to use while we were there.  Deep down inside, I was relieved.  Flying would be so much easier than driving.

The change in trip plans meant I had to get all the gifts wrapped and ready to ship.  I did not want to carry them on the plane with me.  This also meant that we celebrated Christmas about four times.  First, we celebrated with the family in Colorado.  Then, Jim and I exchanged gifts on the night of the 23rd.  Then on Christmas Eve, we left early in the afternoon to drive to Amy's near Boulder, Colorado to spend Christmas Eve with her and her two children.  We exchanged our gifts with them that evening and then went out for a special dinner.  Jim and I then drove to DIA (Denver International Airport), which is only about twenty minutes from Amy's house, and spent the night at a hotel.  The next morning, Christmas Day, we flew to Salt Lake.  We were surprised how busy both airports were.  I guess more and more people travel on Christmas Day.  I do think the lower rates make it more attractive to do so.

Immediately upon landing in Salt Lake City, about 3:00 in the afternoon, we drove the twenty minute drive to the home of my soon to be daughter-in-law's parents' home.  I had never met Sheridan's large family, nor had I met her parents.  We literally crashed into the middle of their huge Christmas party.  Sheridan is one of six children, and nearly every child has a large family.  Being a part of this family gathering was an awesome experience.  They are a wonderful family.  I felt blessed knowing that my son in marrying into such a beautiful and gracious family.

When Sheridan and Ryan tie the knot later this spring, they will be creating a blended family that will include Sheridan's two young boys and Ryan's three children.  These kids are already just like siblings. It warmed my heart to see the love and connection they all have with each other.  I captured this precious picture of Sheridan, note the beautiful engagement ring on her finger, giving a loving glance towards her son Max and Ryan's daughter Regan who are sharing a chair and a moment.  Ryan's son Parker is looking on as he sits in front of the fireplace at Sheridan's parents' home. 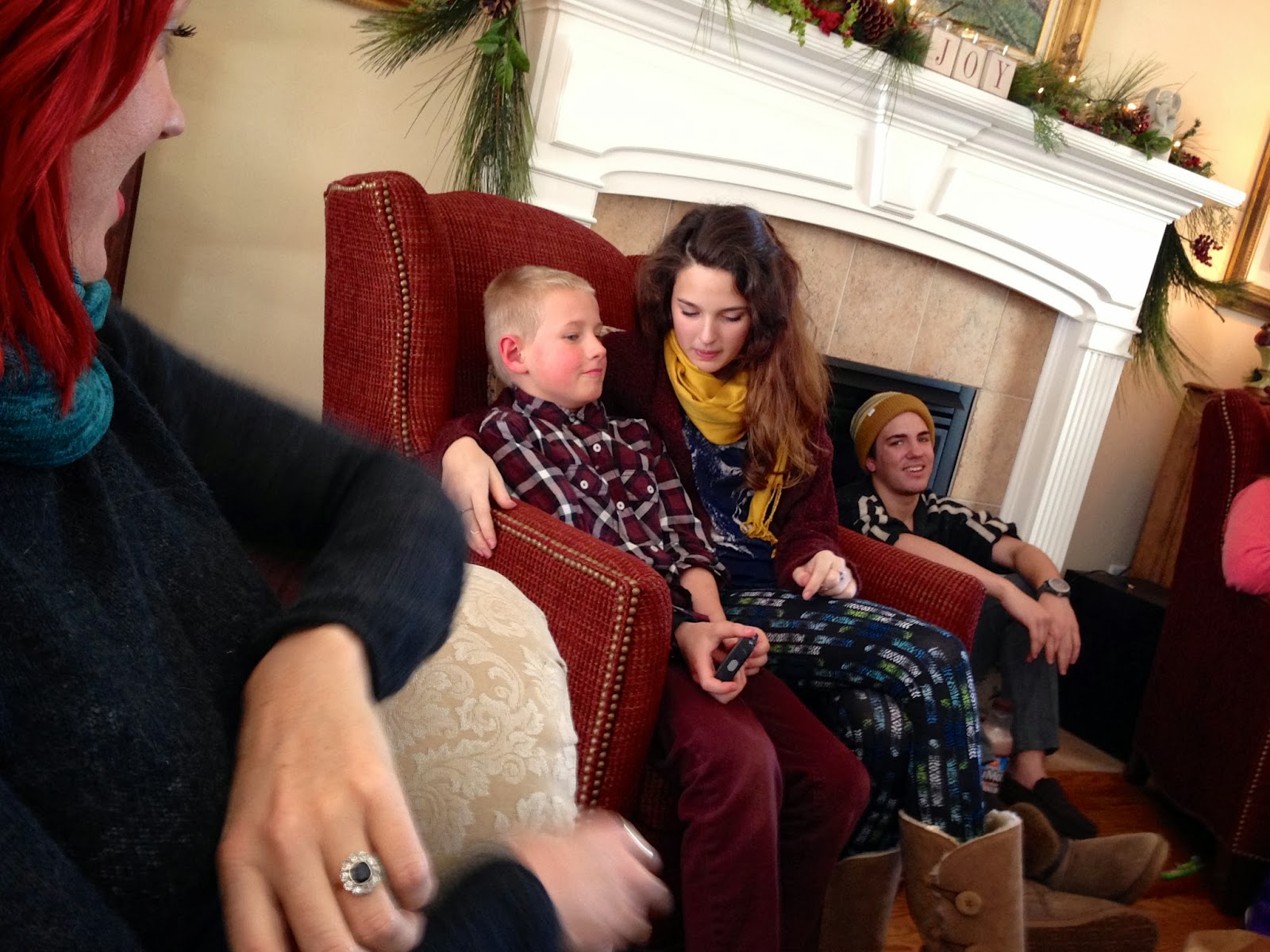 Here, Max is helping Ryan's son Bridger check out the cool hunting pack that Bridger got from one of the cousins on Sheridan's side during the family gift exchange.  Bridger, and Max, both loved the gift. 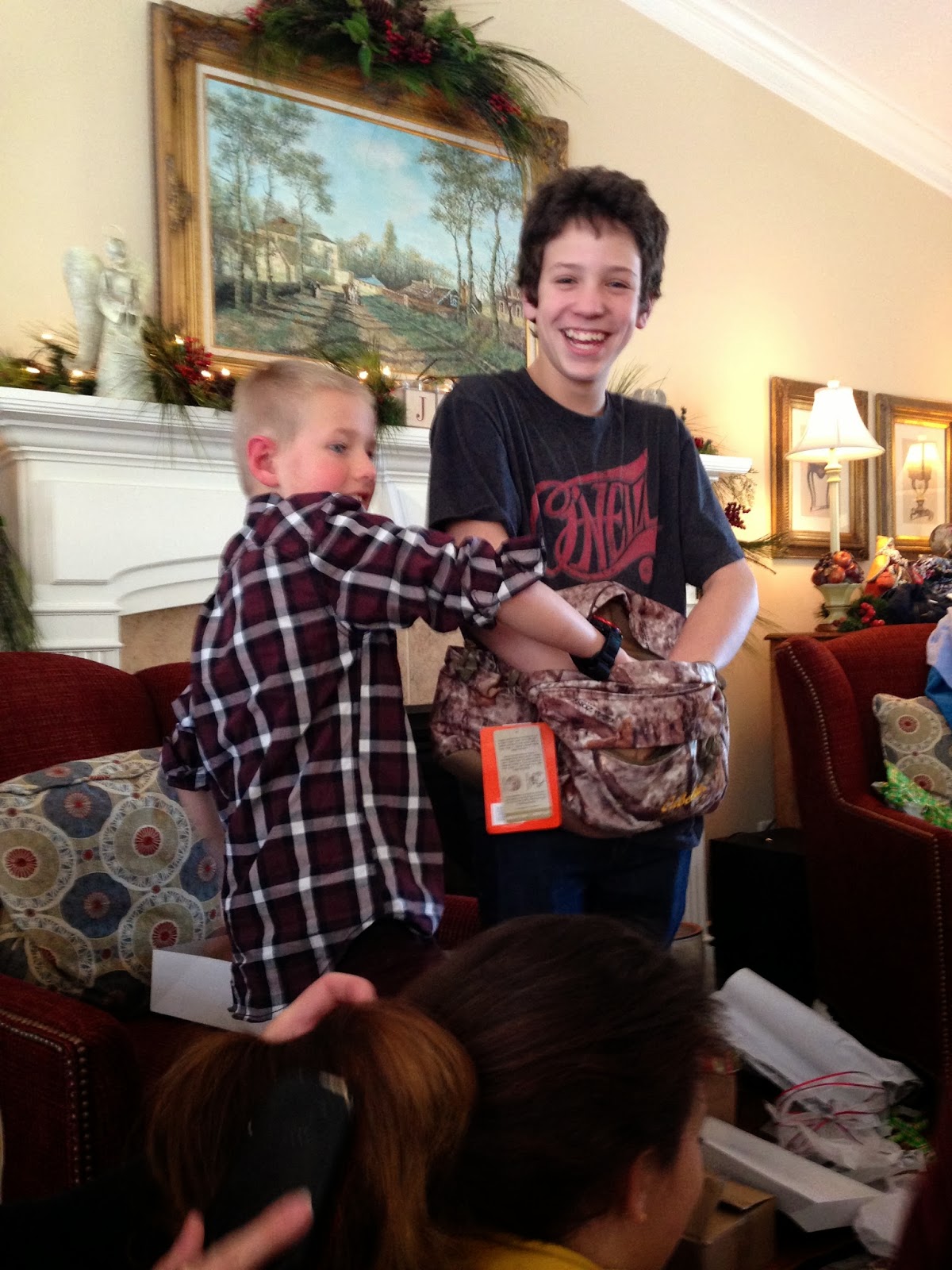 Soon, it was time to move on to Sheridan's home for another Christmas party.  We planned to exchange our family gifts after daughter Keicha, her daughter Gillian, and her friend Mike drove down from Ogden.  After the gift exchange, we would all have Christmas dinner which was prepared by Ryan and Sheridan.  Sheridan's sister and her family would also join us.  (I know, I should provide a chart so you can all keep track of who is who!)

After we drove the mile or so to Sheridan's house and walked in the door, we literally almost tripped over Parker (my oldest grandson) who was right inside the door putting together the family Christmas present from Santa.  It was a green machine.  Soon, it was assembled and moved outdoors.  As you can imagine, it is designed to give the rider a wild ride full of excitement. 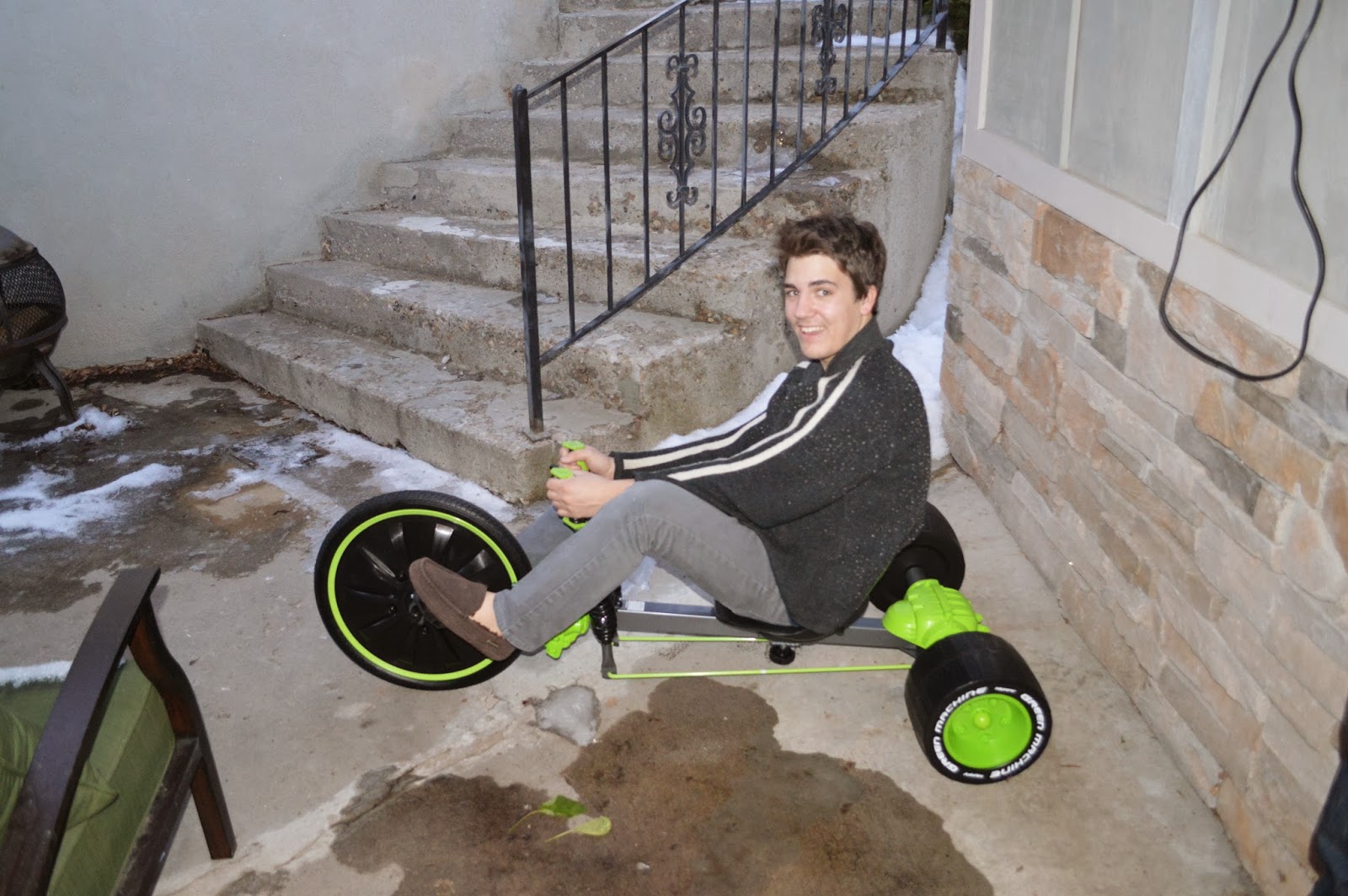 Upon entering the house, on the entry table, Sheridan had a tasteful display of family photos, books, plants, and artwork.  There among the special items was a bit of a heartbreaker.  A framed photo of Julie with her head in the mouth of a giant lion statute at the Salt Lake Zoo was placed next to a small urn of her ashes.  That photo was taken about twelve or thirteen years ago when the entire family made an excursion to the zoo. Julie was teasing the children who were toddlers then.  Back in those days, Julie was Sheridan's roommate, friend from work, fellow student at the U of U, and best friend.  While we all knew Sheridan well, Ryan had never met her until after Julie died. Now, Sheridan, will soon join our family when she marries Ryan. 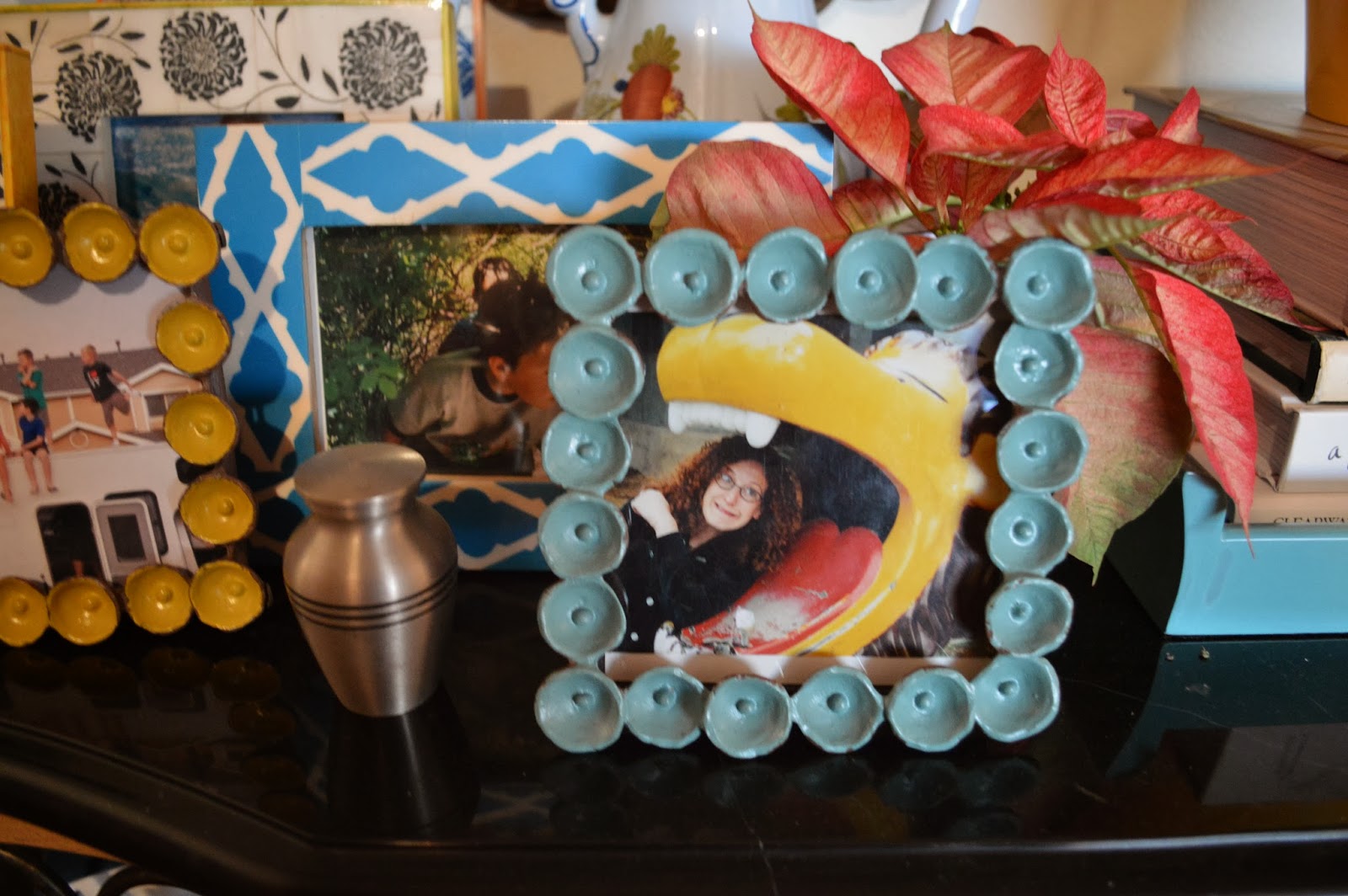 Not long after arriving at Sheridan's, I went to the window and snapped a photo of the Salt Lake valley below her beautiful home in Bountiful.   The sun was beginning to set on a wonderful Christmas Day.  We had successfully made our trip, and we were with family.  Nothing makes me happier than to be surrounded by my family.  I was a happy mama. 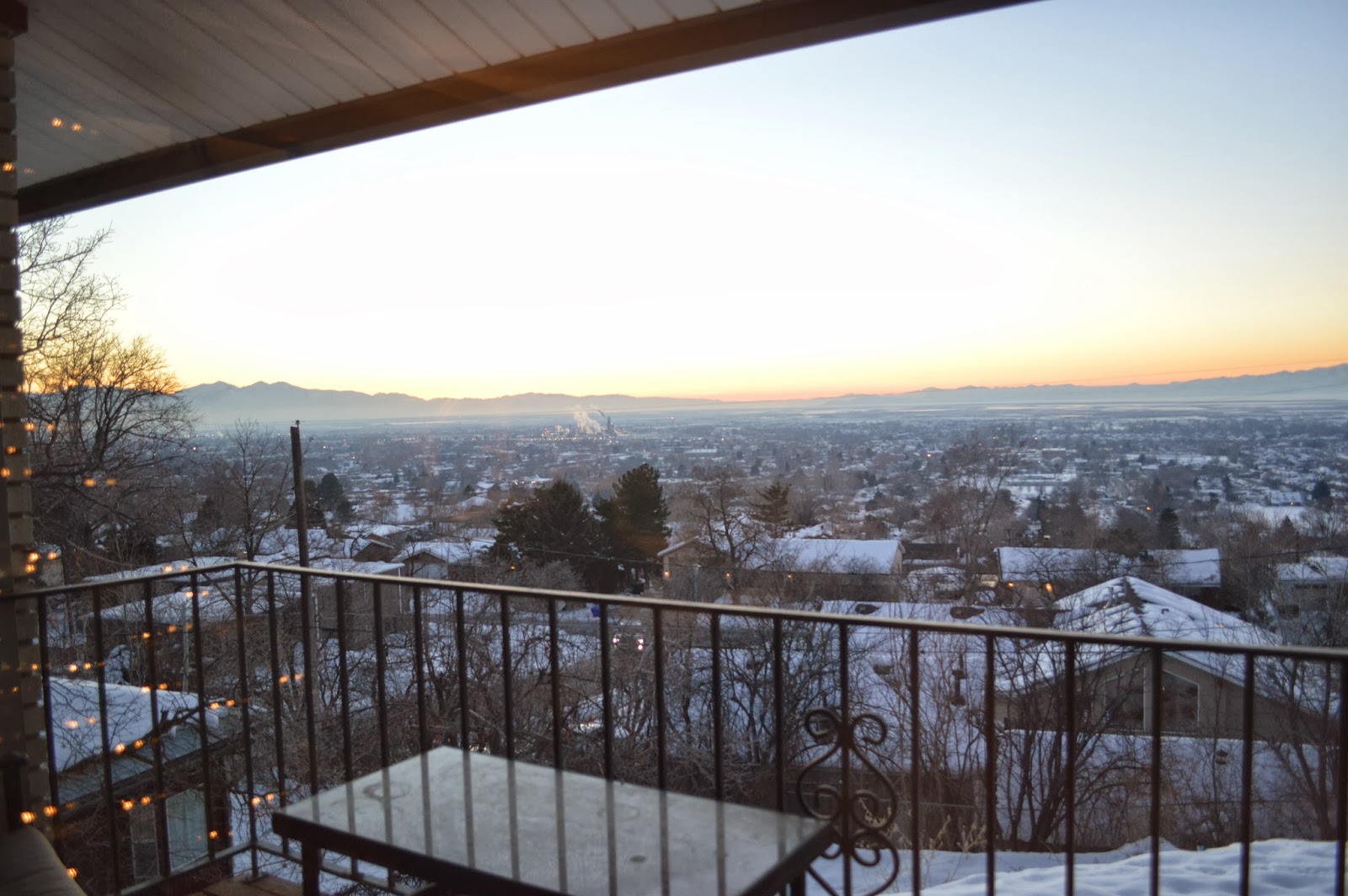 It is always great when cousins can be together.  Here is Regan, Ryan's daughter, and my second oldest grandchild, with Gillian, Keicha's daughter, who is my fourth born grandchild.  They were both born the same year, but because Regan was born in January, and Gillian in October, they are one year apart in school.
The kids are ready for another round of gift opening, but I think Grandpa Jim is tired and over the gift exchanges that have gone on for days. 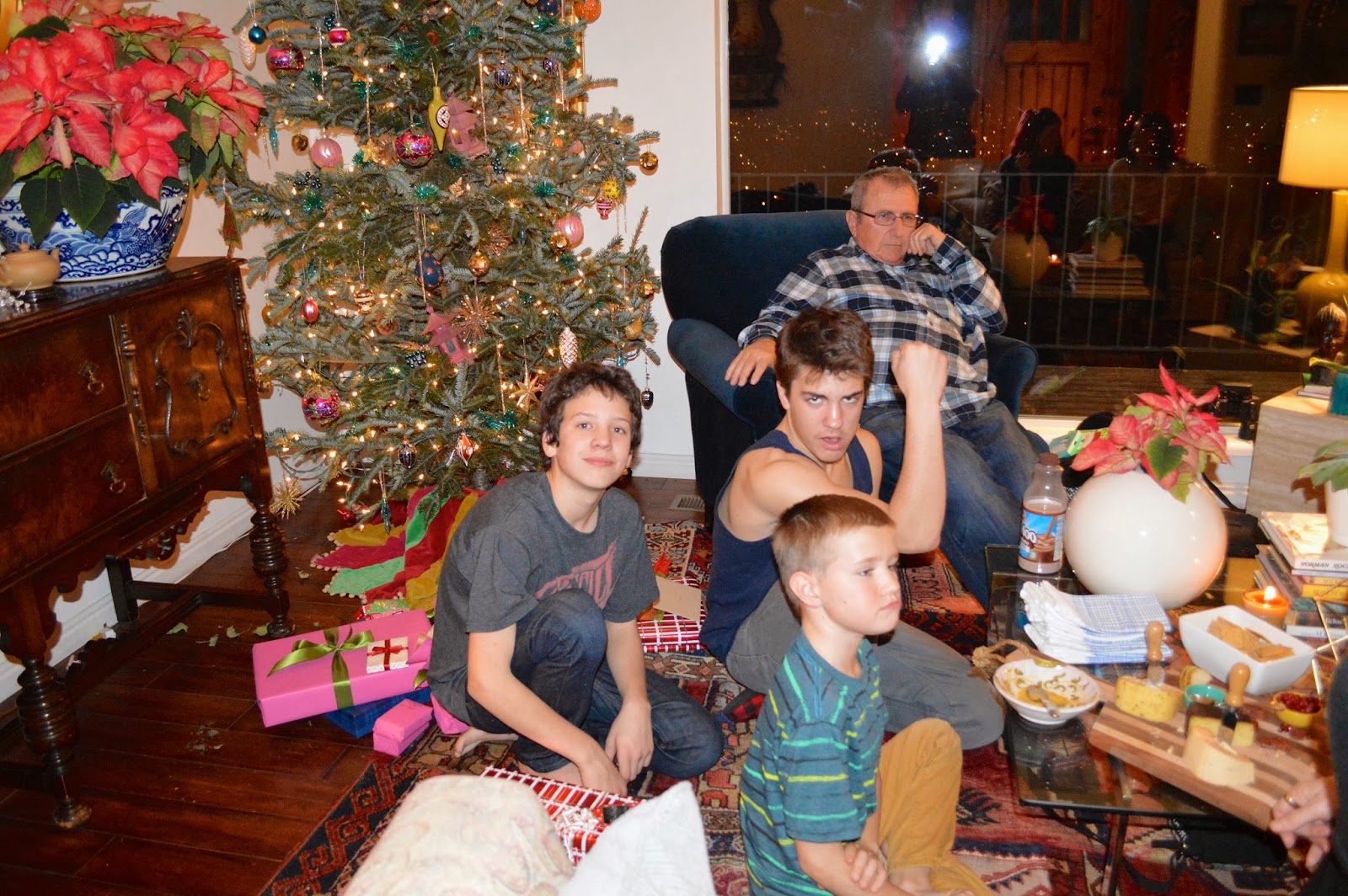 I like to pick out gifts for the grandchildren for Christmas, but I worry that they won't really like my selections.  If they ask for gift cards, or money, that works too.  I was so excited about Bridger's gift.  I don't know why, but I hoped he would really like them.  I had so much fun picking out these red Van's.  I see a small smile on his face as he opens the gift. 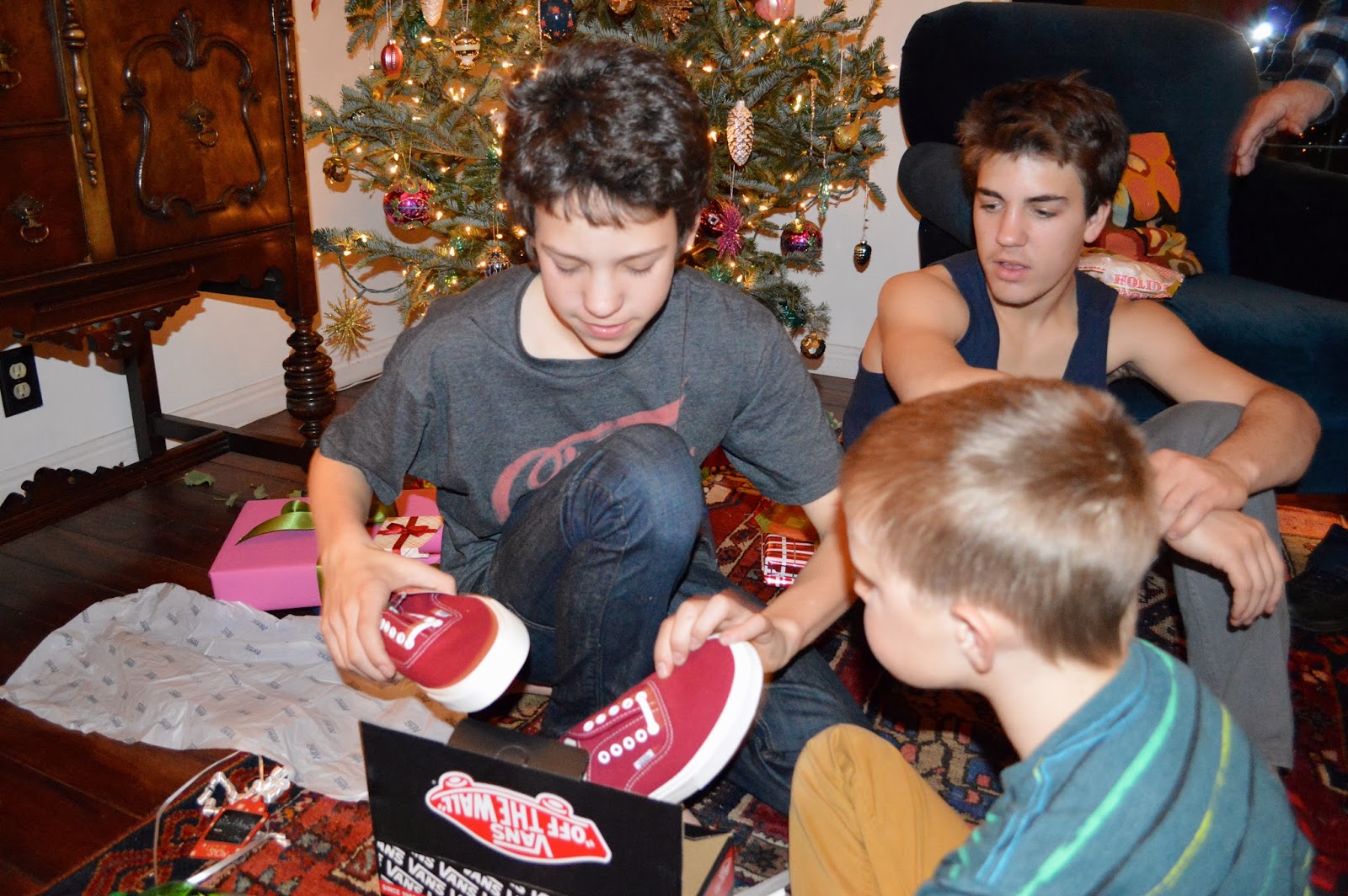 Phew…I think he really likes them! 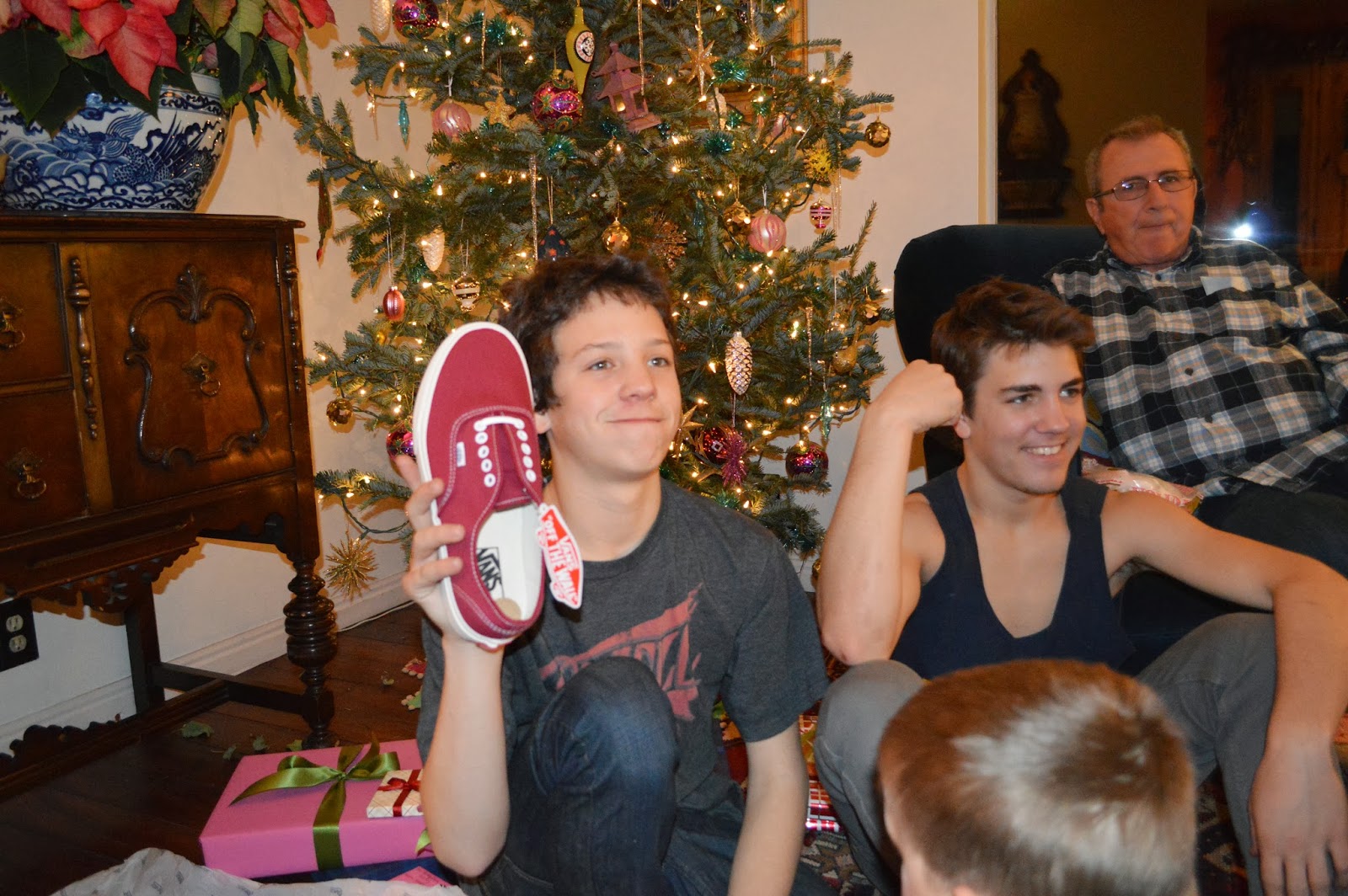 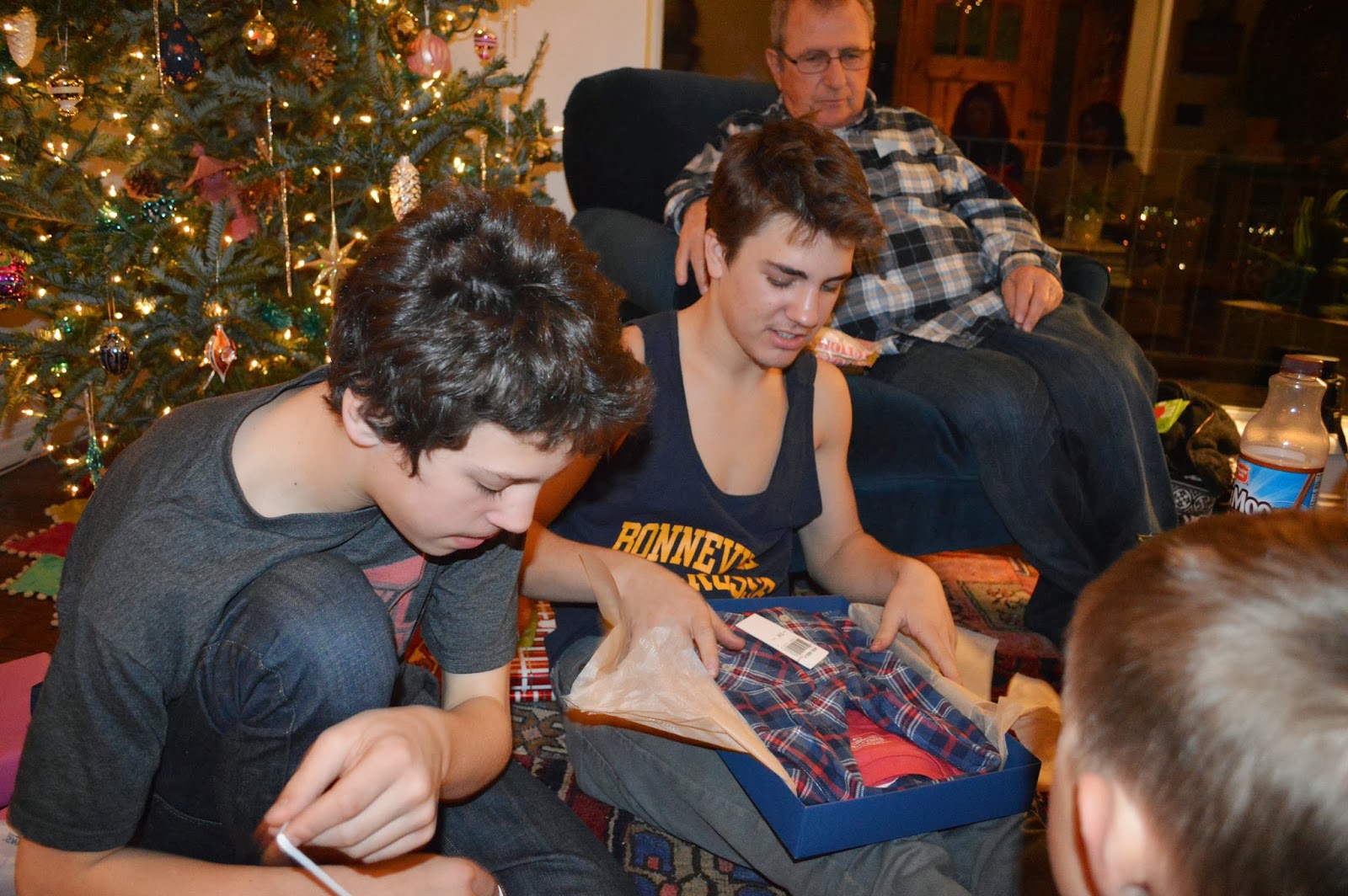 Yep, he likes it, and I think he looks very good in it.  Ok, I am a grandmother, and I brag about my grandkids, but, isn't he one handsome boy? 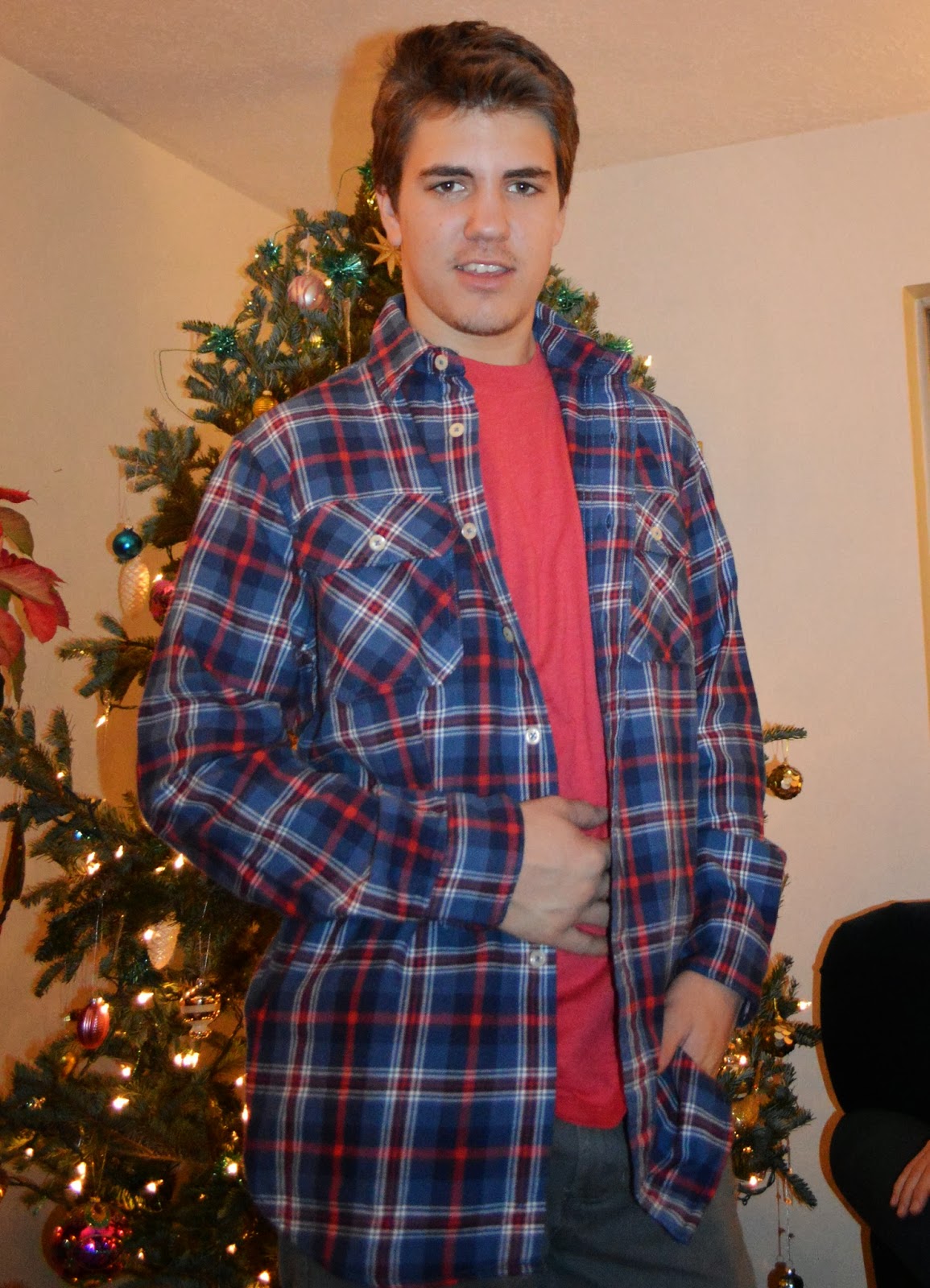 The girls unwrapped their matching pajamas and matching scarves along with other gifts from me.  Hannah also got matching p.j.s.  I wish she could have been here with her cousins for the Utah celebration. 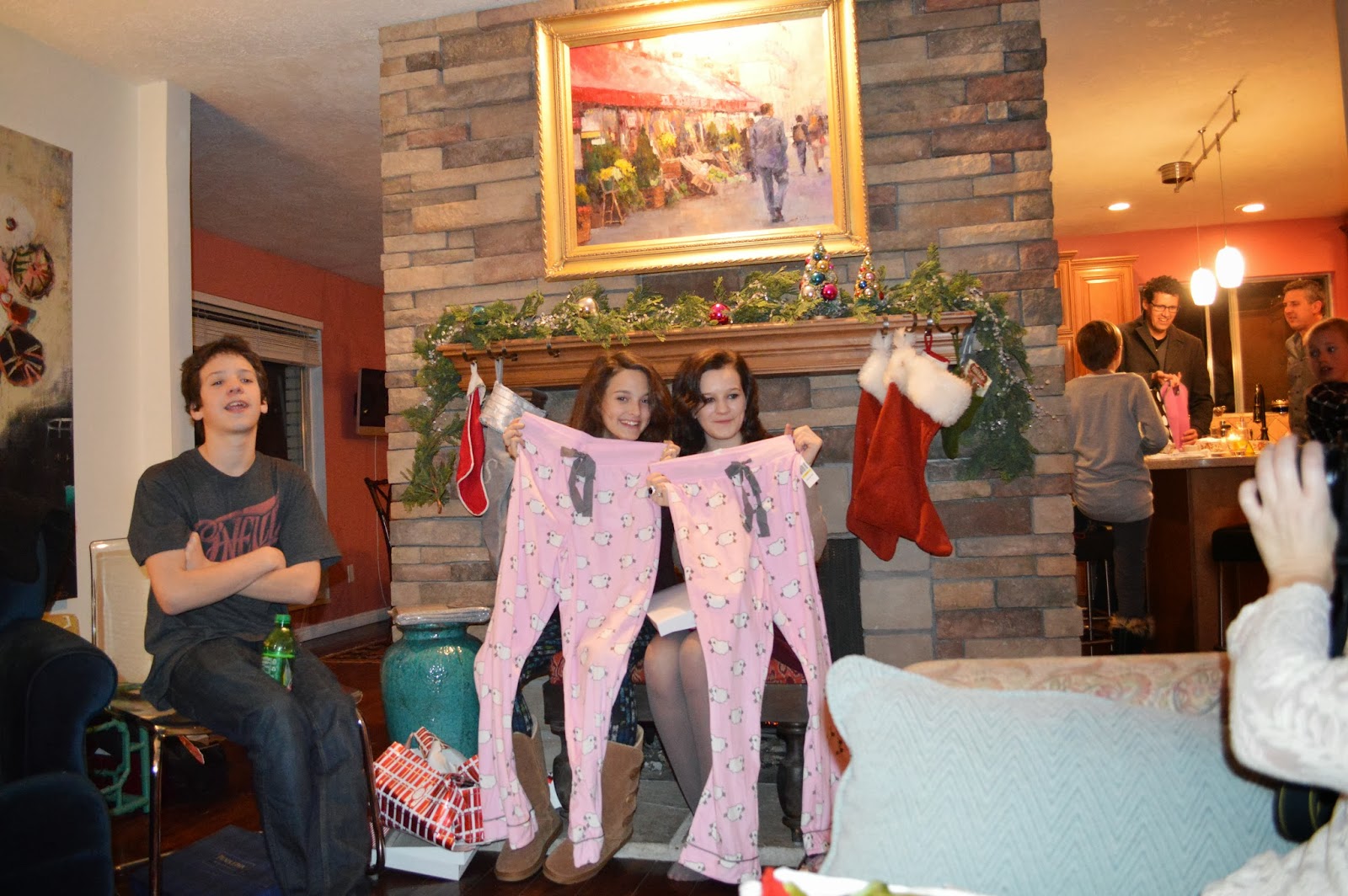 This year, all of my children received the same sentimental gift from me.  While I was on Vashon Island in October, I found a gift shop called Giraffe Home.  Of course I was drawn to the shop because Julie's favorite animal was the giraffe.  It seemed that all of us would always look for a giraffe keepsake to bring home to Julie on every trip we went on.  At Giraffe Home, I found the perfect card.  On the front of the card was a drawing of a giraffe that caught my eye.  Inside, there was a beautifully written poem called Giraffe Blessing.

In so many ways, the poem epitomized Julie.  It seemed to be a message she would want us all to take to heart.  I bought a card for each of my children.  I also found the perfect Christmas tree ornament to go with the card:  A silver giraffe.  We all cried when the gift was opened.  I am sure Julie would have loved the gift. 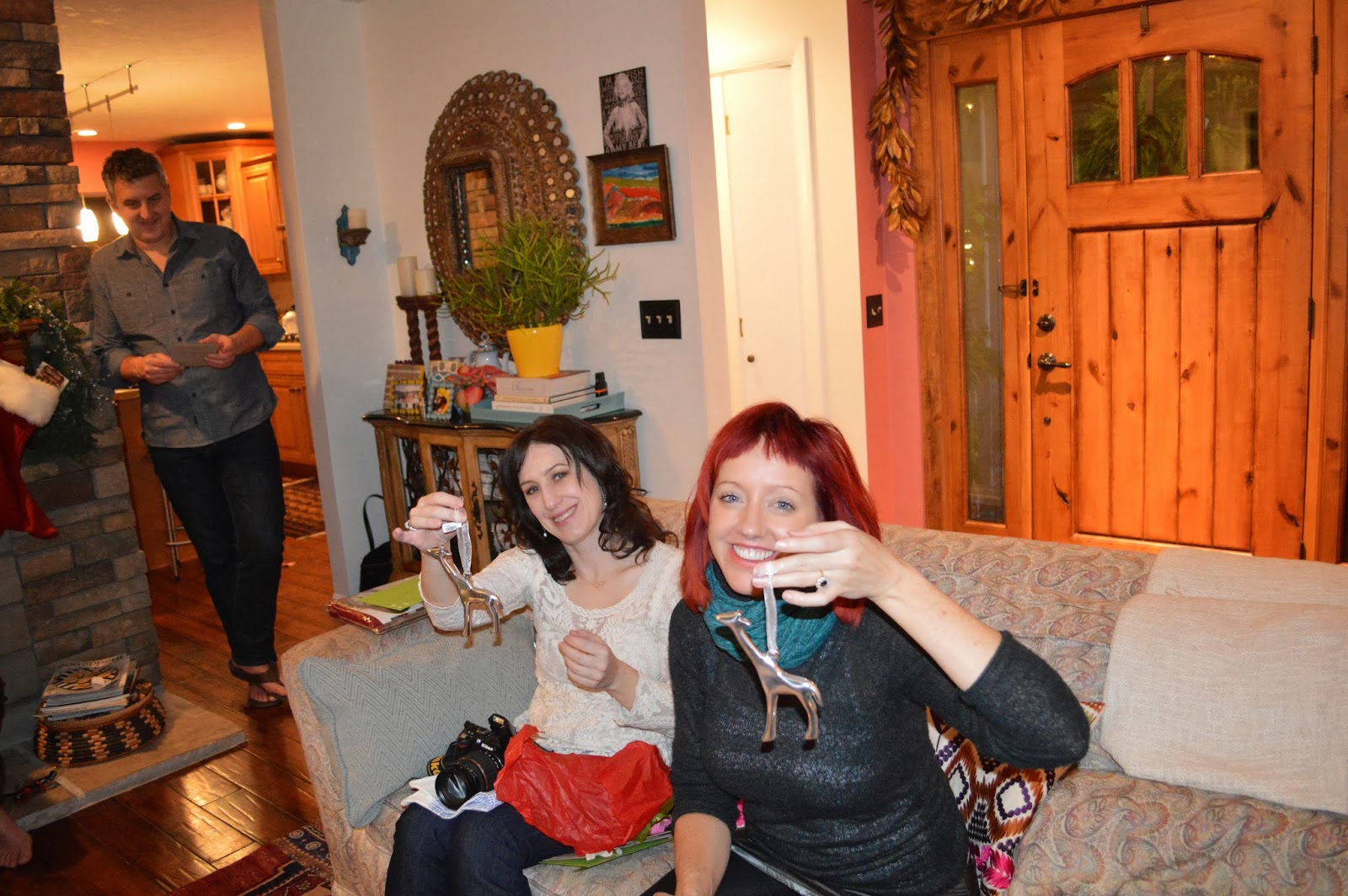 Soon, the gifts were all opened and Ryan and Sheridan resumed the preparation for our scrumptious Christmas dinner.  The girls got into their new p.j.s.  (I notice that Parker made an appearance in the photo in what is called a "photobomb."   Note his flexed muscle on the left of the photo.  I didn't notice it until I published the photo.  Kids these days!  LOL) 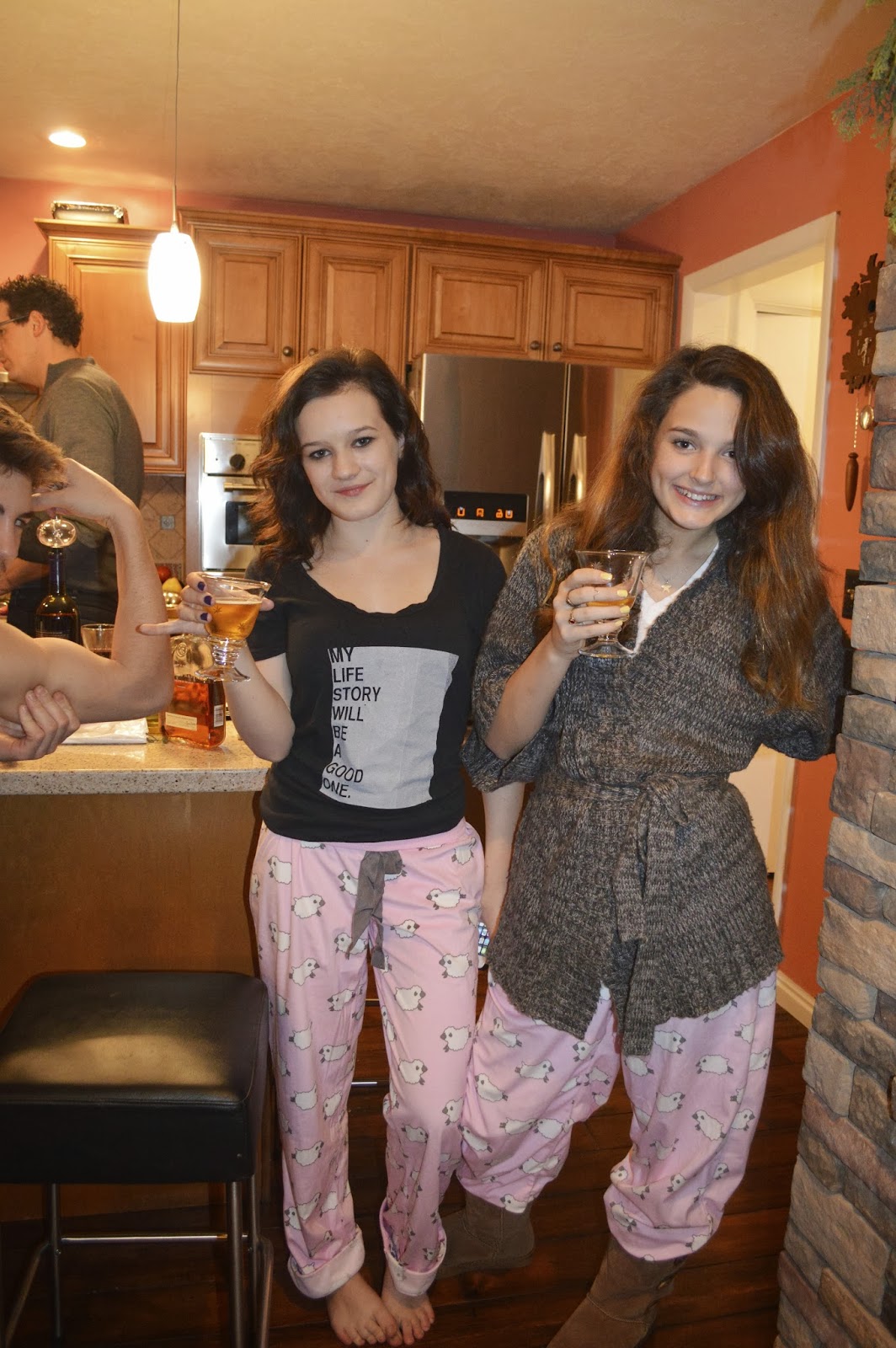 Parker tried on his new backpack, a Christmas gift from his dad. This outdoorsman who loves to hike, ski, fish, and hunt is ready for more adventures. 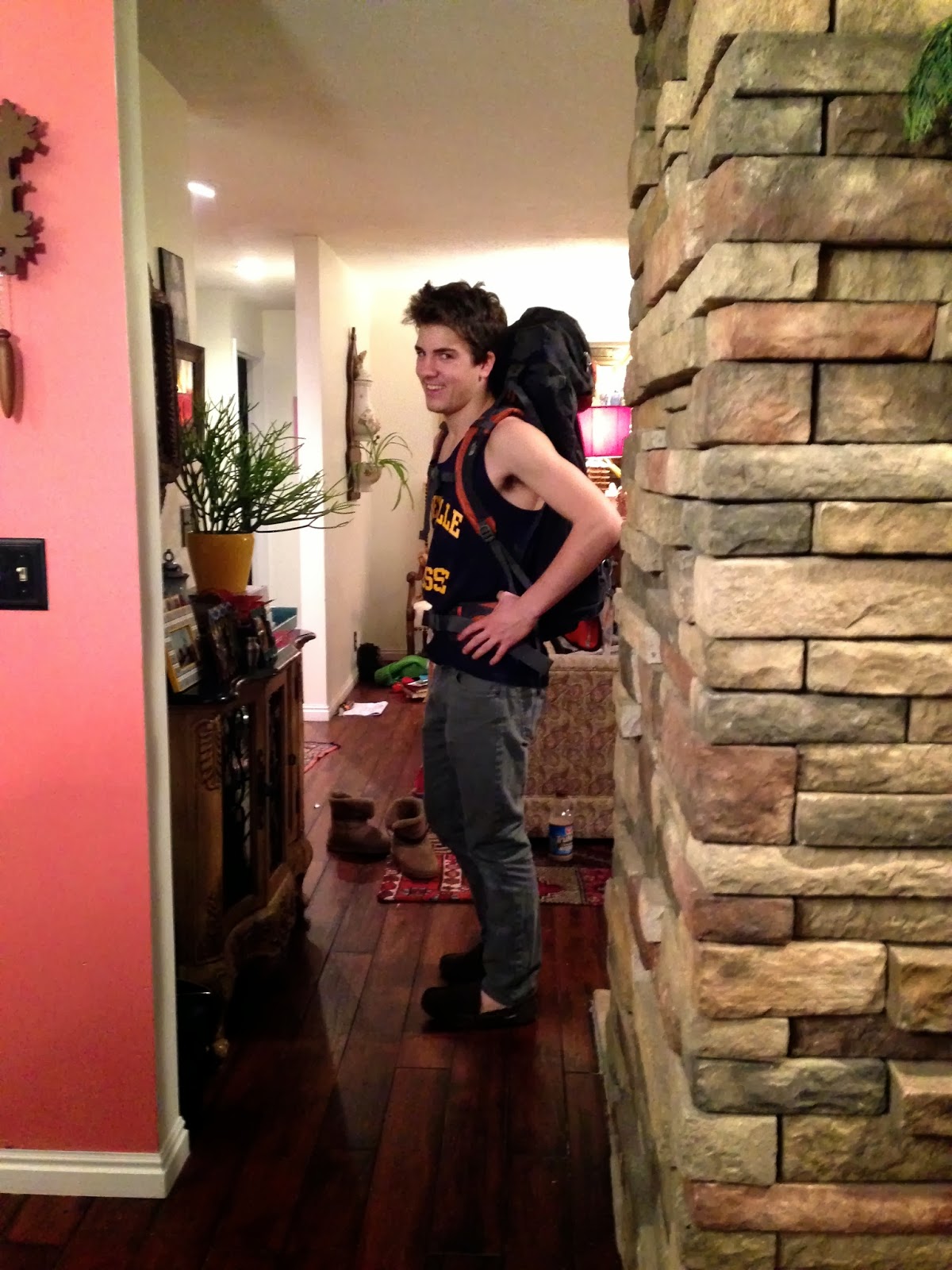 I also caught a photo of Bridger warming up in front of the fire.  I think this spot, 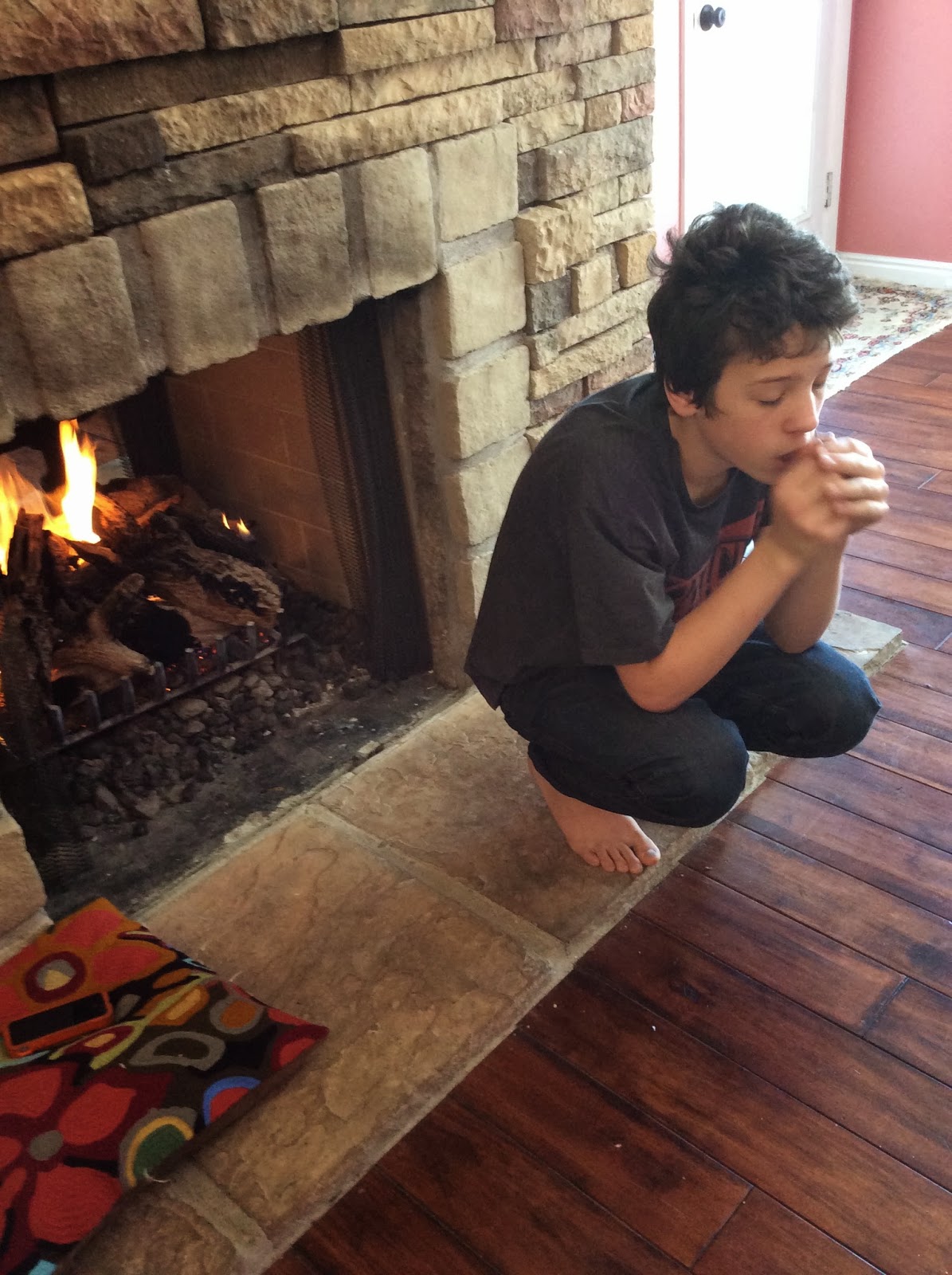 and this one, are favorite spots in the house.  This is the same fireplace that gives off warmth on two sides. 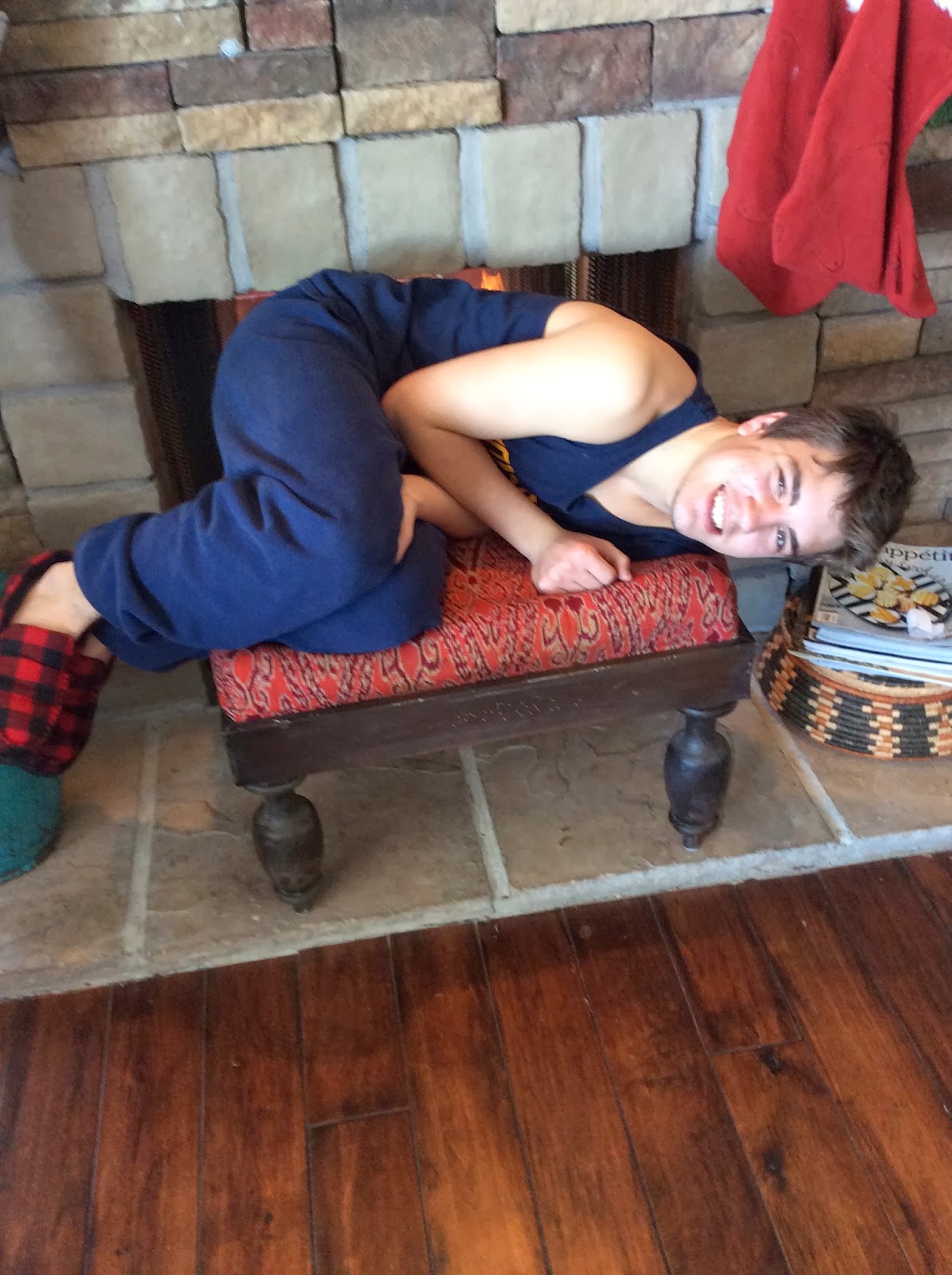 Christmas Day 2013, was anything but simple.  It was complicated and took great planning.  It was also packed with so many gifts.  Jim and I enjoyed a relatively easy flight early in the day.  We then were blessed to be included in Sheridan's extended family celebration.  It was a rare and special treat to be with my two oldest children and their children on Christmas Day.  We then were treated to a truly fabulous Christmas dinner that was prepared by my son and Sheridan.  We enjoyed spending time with Sheridan's sister and her family who joined us for dinner.  This celebration was truly one for the books.  Jim ended the day by reading his Kindle in his own special spot near the Christmas tree.  Thank you Ryan and Sheridan for this special day. 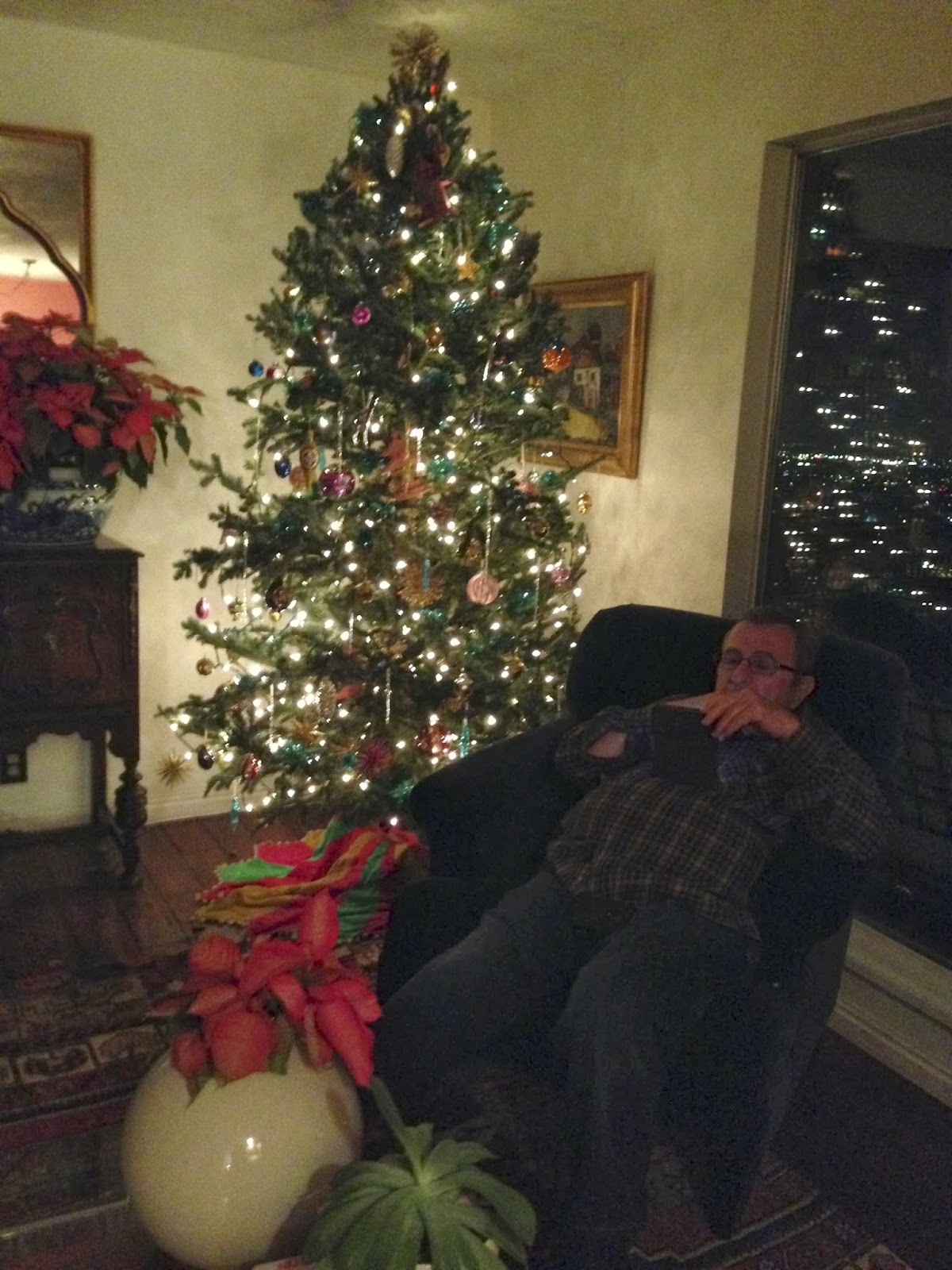 Only one thing would have made the entire Christmas celebration better:  having son Jonathan and his family with us.  They did not come to either Colorado or Utah for the holidays this year.  We missed them greatly.  Maybe next year…

*  There is still more to come.  I will share our "vacation" part of the trip to Utah next.