During this time of grief for the loss of my daughter Julie, we have also been going through a time of grief over the break-up of a marriage and family in our immediate family.  Since I respect the privacy of family members, I will say little about the grief that we have been going through because of the loss that is associated with divorce.  I only will say that we have experienced great turmoil, pain and sorrow.  Sometimes it seems almost too much to bear.  And yet, in the midst of upheaval, good things continue to happen. 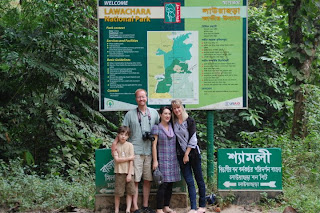 On the 11th of November, my husband and I traveled to the northern part of our state support my daughter Amy during the difficult time she is going through in the break-up of her marriage.  That evening, we had a bon voyage dinner.  My oldest daughter Keicha, Julie's former significant other Jason, and Keicha's good friend Amy were departing the next day for Bangladesh.
My youngest son, his wife, and my grandson have been in Bangladesh for the past year and a half.  It has been difficult to have them so far away from home, and yet it has also been exciting and our lives have all been enriched because of the experiences this young family has had on the other side of this planet.  During the time they have been gone, they have kept us up to date on their lives through their the wonderful blog: threeinsixmillion.blogspot.com .  We are able to keep in touch via the many forms of technology now at our fingertips.  For that I am thankful, but miss them, we do.
Thankfully, we were able to bring this family home for Julie's services in early June.  After a week of much family togetherness, a time when all four of my remaining children, all of my seven grandchildren, and Jason, Julie's former significant other, all seemed to move as one tight-knit pack, I wondered how all of us would survive another goodbye as we moved on to our separate lives.  Jonathan, Samantha and Atticus would journey back to the other side of the world.  Ryan and his family, Keicha and her daughter, my former husband and his wife would all return to Utah.  My husband and I would return to Southern Colorado, and Amy and her family would remain in the Boulder area, as would Jason.
It was then that I had the idea that Jason should plan a trip.  It would be something he could look forward to.  Bangladesh seemed to be a great destination.  Not only would Jason have an exciting trip to plan, but Jonathan and Samantha and Atticus could look forward to a visit from home.  Before long, Keicha also decided that a trip to Bangladesh would also be something wonderful to look forward to.  Her friend decided to join Jason and Keicha on the adventure.
And so, roughly five months after the first conversations about thinking about a journey to help with the healing from a terrible loss, the trip became a reality.  It seems the trip has been a great success.  That is what I read on Facebook.  I've seen the first photos.  I read a few status updates.  I've rejoiced that they have all been together and made happy memories. 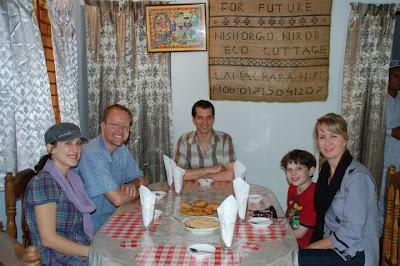 At the same time, our hearts have been breaking over the break up of a marriage that has been a major part of our family for a decade and half.  Life does not seem fair at times.  It seems much too painful.  And then, life seems exciting and hopeful and joyful.  It definitely has it peaks and valleys.  The most accurate description of my life over the past ten days would be to describe it as one big emotional roller coaster ride.  Thankfully, I have a husband who holds my hand through the entire ride.  For that I am extremely grateful.
Posted by Sally Wessely at 10:05 PM 5 comments: