Memorial Day ~ A Time of Remembrance

Memorial Day,
a
day of remembrance,
was first set aside in 1866 as a day to remember those soldiers whose lives were lost in the Civil War.
It was celebrated on May 30 each year.

I remember as a child that we sometimes called this day Decoration Day.
Over the years, I think the meaning of the day has evolved.
Some see the day as a day to honor those killed in the service of their country.
Others see the day as a day to remember those whom they have lost to death.
They remember them by visiting their graves and leaving flowers.
Others see it as the beginning of summer and celebrate it by having a barbecue.

In 1971, Memorial Day became a federal holiday designated to be celebrated each year
on the fourth Monday of May.
I found a short video about the history of Memorial Day that you might find interesting.

This year, I found myself alone on Memorial Day.
Jim had to work.
Family did not gather as we sometimes do because of busy schedules and bad weather.
I chose to spend the day remembering those no longer with us by visiting the cemetery alone.

I never knew my grandmother, Lulu Castle Townsley.
She died from breast cancer at the age of sixty-seven in 1941,
four years before I was born.
An independent woman, she homesteaded by herself in Northern Colorado before she married my grandfather at the age of 35.
Throughout her life she worked very hard to support herself and her family.
As a child, she made bread for the family while her own mother worked when her father died when she was nine years old.  Mother told me her mother had to stand on a chair to reach a counter where she would knead the bread.
Lulu Castle Townsley had to fend for herself as a homesteader.
She drove a horse and buggy across the plains to town, Pine Bluffs, Wyoming,  with a hoe beside her in the wagon which she used to kill the rattle snakes that would get entangled in her wagon wheels.

She was forty-two years old when my mother, her only child, was born.
She worked throughout my mother's childhood as
a milliner,
a cook,
a caretaker and cook for sanatoriums for TB patients,
and
as a seamstress.

Even though I never met my grandmother, she has always been a strong role model for me.
My grandmother was born 141 years ago and has been gone for 74 years.
It makes me so sad to think that my mother only had her mother for 25 years.
I have been blessed at age 70 to still have my mother with me.

As I stood at my grandmother's gravesite, I told her that her daughter,
my mother, is still here with us in the land of the living.
She will turn 99 years old at the end of the week.
I told my grandmother not to expect her to join her anytime soon.

My mother comes from pioneer stock,
yet she is a very modern woman with old fashioned values
who always stays up to date in all that is going on in the world.
She is an amazing woman.
I think her mother would be very proud of her.
I know I am.

Today, I left flowers on the graves of my maternal grandmother, my maternal great-grandmother and her son, my great-uncle.
All are buried in Evergreen Cemetery in Colorado Springs, Colorado 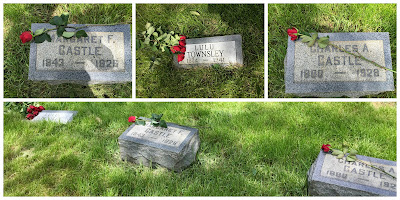 My father and my daughter are buried not far from the other family grave sites. 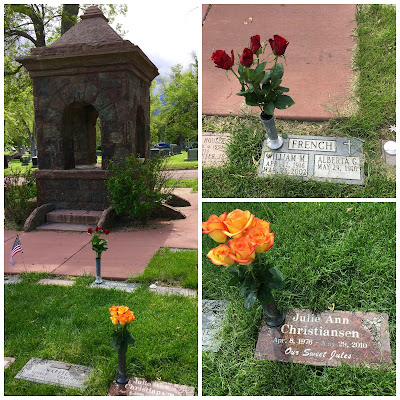 I didn't get over to the other part of the cemetery where my paternal grandparents, aunts and uncles are buried.
I explored the older area of the cemetery because of its historical significance.

General William Jackson Palmer,
who served in the Civil War,
and then founded the city of Colorado Springs, Colorado, is buried in this cemetery.

I love all of the old structures on the grounds of the cemetery.
This is the old chapel that located just to the north of where General Palmer is buried. 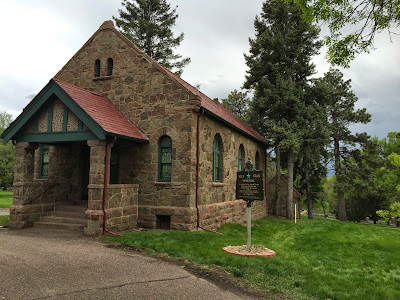 As I got out to take a photo of the chapel, I saw a blue bird sitting on top of the  commemorative plaque in front of the building.
He flew away before I could get a better photo of him.
Can you see him?
At first I thought he was a small robin.
Then I saw his blue feathers and wings as he flew off. 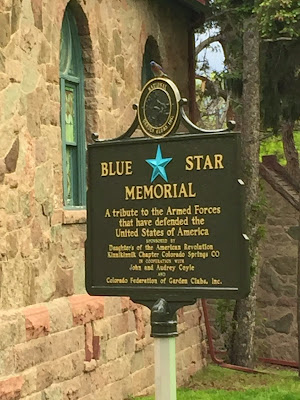 Nearby, is this interesting sculpture.
The inscription reads,
Tis not enough to help the feeble up,
But to support them after. 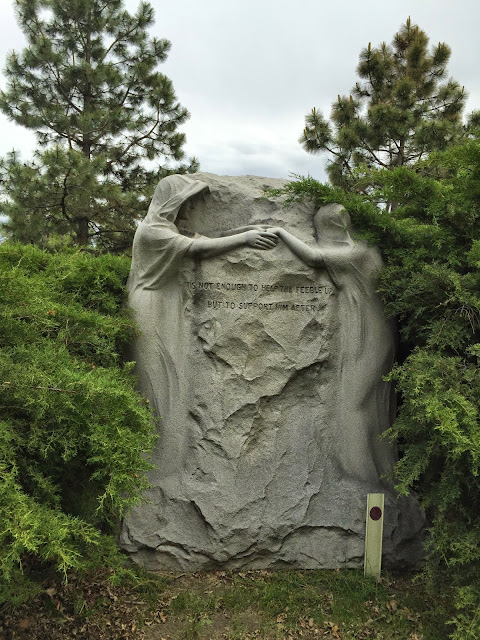 Today, as I spent the day remembering those no longer with us,
I also was reminded of those whom have supported me throughout the past five years.

One of Julie's dear friends ran the Boulder Boulder.
When she finished the race, she posted how Julie was with her during the race.
Her post was a reminder of how many dear friends Julie had in her lifetime.
Those friends will never know how much their love and support has meant to me and to her family.

I also think and remember so many of my dear friends and family members whom have been there for me during these past five years.
Many of you are blogging friends whom I have never met in person.
You have walked with me through many dark days.
You have spoken words of encouragement and love.
You have helped me find healing.
You have listened to me far more than I have listened to you.
You have supported me.
You have not left me to flounder through dark days alone.
Thank you.
I love you all.
It is good to have a day of remembrance.