Yes, July certainly has had its moments.
Some have been so awesome.
Others, not so much.

The awesome part has been time with family and friends.

While my children and grandchildren were here visiting, we were able to also spend some time with my cousin Diana.  She is the daughter of my father's sister.  When we were children, her family and my family were always together for family get togethers that included holiday celebrations, picnics, camping, and just playing together on a summer afternoon.  Her sister Donna is my age, just ten days younger, so Diana is the younger sister we always tried to stay away from.  We were just too cool to play with the younger siblings.

Now, my younger cousin Diana is also known as Dian Curtis Regan.  She is a children's books author.  She and her husband had dinner with all of us on the Fourth of July, but she wanted Keicha to come over and see her home. I also wanted to inspire my granddaughters (and myself) by seeing her office. 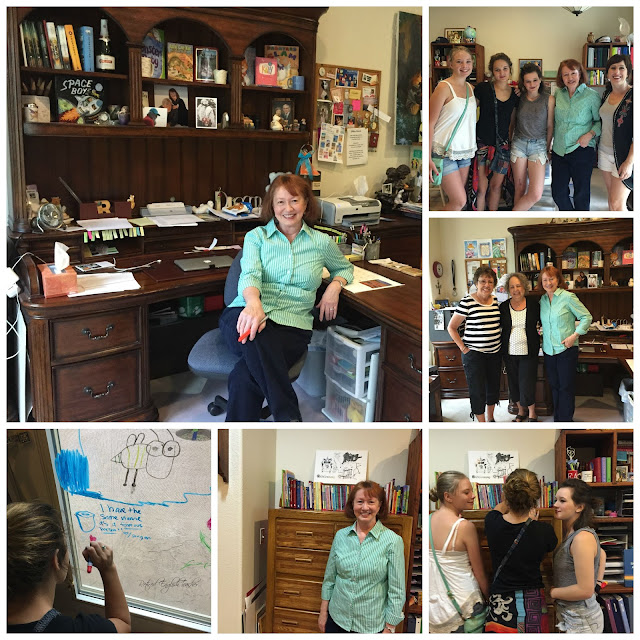 In the collage above, I have included a photo of Dian at her desk.  Top right photo is of my granddaughters and daughter with Dian, a photo of Dian's sister Donna and me with Dian, the girls looking at the books Dian has authored, Dian in front of the books she has published, and finally, a photo of Regan writing on Dian's window.

My grandchildren grew up reading their famous cousin's books, so it was a thrill for them to see the place where she "works her magic."  Dian's latest book is Space Boy.  I love this photo of my granddaughter Gillian reading Dian's book, Princess Nevermore.  It was taken a few years back. 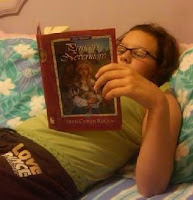 I've spent much time over the past few months up in Denver at National Jewish Health involved in health test and consults.  I've had the good fortune of going up to this renowned hospital for the past nineteen years.  I started going up there after a chemical exposure I experienced on the job.  They have always taken such good care of me.

I so appreciate my GI doctor.  Lately, she has put me through some tests that haven't been pleasant, but she is doing all she can to solve my GI issues.  Sometimes, I have to remind myself of this message as I am walking into the hospital for yet another test.  "We never say never." 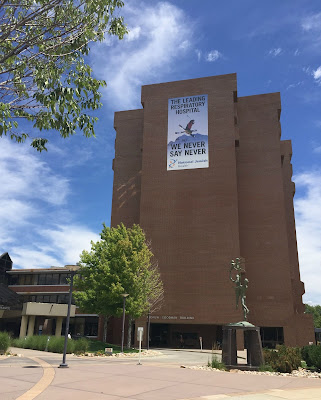 I have recently been diagnosed with hypercontractile esophagus or jackhammer esophagus.  Not fun!  The days of having symptoms have been more numerous than I'd like to have experienced.  Attacks are very painful and can sure ruin a day.  My doctor has treated the condition by giving me a BOTOX injection in the esophagus about a month ago. (No, I couldn't talk her into giving me any BOTOX injections in my wrinkles on my face!)  The next day, the injection or the endoscopy caused me to experience the worst attack of esophageal spasms I've had yet.  The spasms lasted several days.  You'd think I'd lose weight since I hate to eat and experience pain so often when I do.

I've had more than one barium test to see how my system is working in the last month or six weeks.  I was scheduled to have a pillcam test yesterday, but then I was hit with a new challenge.

I could barely believe what I was hearing on Tuesday when I went to my allergy doctor to see if he could diagnosis a strange rash.

I had driven to Denver on Monday for a doctor's appointment.  After the appointment, I was able to spend time with a girlfriend whom has recently moved back to Colorado from California.  We had such a wonderful time catching up.  Marilyn is one of those friends that you can not see for years and then when you do see those types of friends again, you pick up where you left off.  I'm so glad she is back in Colorado again.  I look forward to more times together. 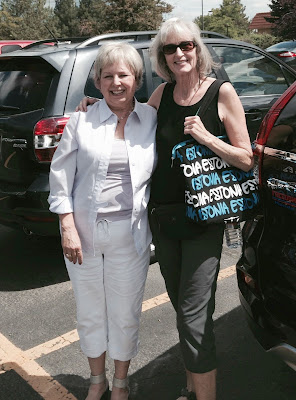 As I drove to Denver, spent time with Marilyn, and drove home again, I marveled at how good I felt.  It was just so nice to feel good and have energy.  I did have a nagging pain right over the area where my pacemaker was inserted, and my left shoulder hurt, and it was a bit painful in my back on my left side, but I didn't think much about it.  "The driving is aggravating my shoulder," I thought.

That night, I notice that I had a strange looking rash that I had not seen earlier in the day right on top of the pacemaker site.  "Weird," I thought.

The next morning, the rash was more pronounced.  I could not decide what on earth it was, so I called the allergy doctor since he is familiar with my rash personality.  (Pun intended!  I am always getting weird rashes.)

His PA looked it over and said she really thought it was shingles.  I nearly fell out of the chair!  She said she wanted me to follow-up with my primary care and the cardiologist because of where the rash was located.  Quite honestly, I wasn't sure I believed her diagnosis.  I didn't think I had enough pain for my problem to be shingles.  I decided not to take the valtrex she prescribed until I knew for sure that I was dealing with shingles.  I honestly didn't feel bad.  I was in denial that I had shingles.

The next day, I felt worse and was able to see my primary care.  He said he'd never seen shingles on a pacemaker site.  He doubted it was shingles.  Then, he looked at the rash and said, "You have shingles.  Why didn't you start the valtrex?  We need to get you on this anti-viral right away."  The nurse in the pacemaker clinic was equally surprised.

Leave it to me.  I seem to get those things others don't get.  I did get the shingles vaccine.  I got it in December of 2011.  I had a terrible reaction to it.  My arm was swollen like you would not believe.  I have read that the vaccine is only effective in 50% of the population over 60.

I did not have chickenpox until I was an adult.  I broke out with them when I was in my late 30's on the same day as four of my five children broke out.  Three of the five were not even in school yet.  That was a bad day!

Honestly, I can't complain about this case of shingles.  So far, I have not been that sick.  I've been taking the valtrex and tylenol.  I have had some moments of pain, but nothing has been too severe.  I only have a few little spots, and so far, they have not given me too much pain or itching or burning.  The greatest pain is generalized in my left shoulder blade, and in the area of the pacemaker.

Jim and I have tickets to see Lady Antebellum on Sunday in Denver.  I have been looking forward to this for so long.  I hope I keep getting better.  I don't want to miss this concert.  I'll keep you posted.
Posted by Sally Wessely at 6:37 PM 14 comments: