Unplanned Time with My Son


Where to start?  One day, I was trying to adjust to idea I was in the waning days of summer with autumn fast approaching, and the next day, I was on a plane flying to Pennsylvania to be at son's side after he had been involved in an accident that nearly took his life.  On Sunday afternoon, September 21, a message was left on my phone from a nurse at a hospital in Scranton, Pennsylvania, telling me that my son had been in accident. "He's ok," she said, but I needed to call because he wished to speak with me.  My heart stopped when I heard the message.  Then, for another twenty agonizing minutes I could not reach the nurse because she was with my son who was having a MRI done.  No one could tell me what had happened because of HIPAA rules.

Finally, I was able to connect with the nurse and more importantly with my son.  He had suffered a terrible trauma to his brachial plexus on his right side when he was cut by glass.  He is fortunate to be alive.  He received seven units of blood.  Surgery was performed to save his life.  In the process, somewhere along the way, damage was done to his nerves on the right arm in the brachial plexus area.  I think we all were in shock those first few days.  Certainly Jon was.  Certainly, I was.

Two days later, On September 23, I flew from Colorado to Pennsylvania on a one way ticket.  I wanted to leave the date of my departure open.  By the time I got here, he'd been discharged from the hospital right from ICU.  I guess at that point I became his trauma nurse.

For three days, I tried to navigate the unknowable medical field waters in search of aftercare treatment. My son was and is paralyzed from the shoulder down on the right side of his body.  He had an incision that is about seven inches long and contains over twenty stitches and staples.  Not being from this area, and with him being new to the area, I had no idea where to start in finding the help I knew he would need to heal.  For three days, I tried to get him into doctors and therapy.  Finally, this week it all began to come together.  We were able to connect with an occupational therapist whom I think will really be a source of great help and encouragement for him on this journey.  We also found a straight shooter for a primary care doctor whom I think will put together a plan to get him into the specialists he may need in his recovery.  We are optimistic that he will recover the use of his arm.

Jonathan amazes me with his determination.  I'm not surprised.  He is one amazing kid.  He has had many adventures in his life.  Perhaps, he has lived life a bit too much on the edge.  He's always been daring and ready to push the envelope.

He returned to work on the following Monday, September 29. He is teaching a full load of classes at the university.  I am here until next week trying to support him in any way I can.  Mostly, I'm just being mom and trying to keep body and soul together while he adapts to his new normal.  I am grateful to have this time with him.  These are treasured moments.  I get to be a participant in my son's life.  I get to observe his determination and hard work as he works so diligently on his classes.  I am able to be here with him in the hard parts of this journey when we can share what is in our hearts.

On last Saturday, the sun was shining and we went to a nearby park for a walk.  I felt so blessed to walk in these Pennsylvania woods with my son and his son. 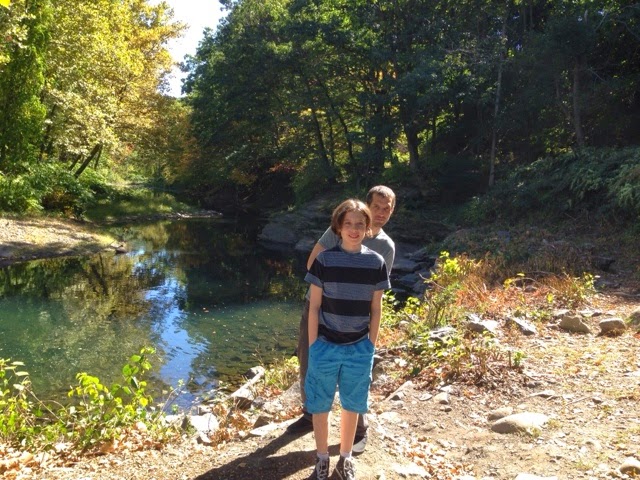 Gratitude: walking in the woods on a sunny early fall day with my son and grandson.

I gather up these memories and store them in my heart.  I may be here because of an unexpected and unwanted event, but I am here with my boys and for that I am grateful.  I also am most grateful that my son is here standing upright and able to show me this place so soon after his accident.  Youth and good health is on his side.

From the shadows into the light, we follow the path we find ourselves on. 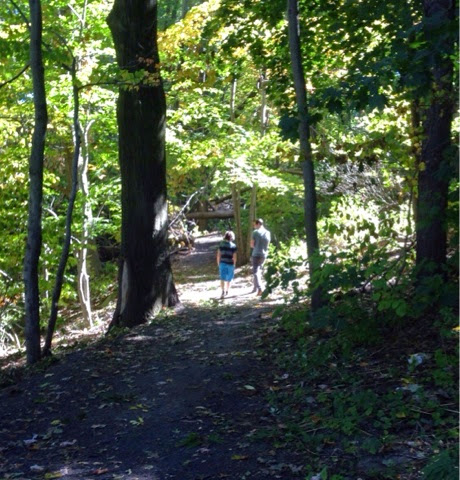 Sometimes the paths of life are not as well laid out as the one we see in this photo.  In those cases, I always think of a path that is new to me.  Parts of it are rocky and obscure.  Other parts have waters rushing across.  I'm not sure how the path will end.  I sometimes feel very lost. That is when I think of this American Indian story:
"You are deep in the woods, and you think you are lost; stop, look at the trees, the rocks, rivers-they are not lost.  They are here.  You are not lost, you are here." 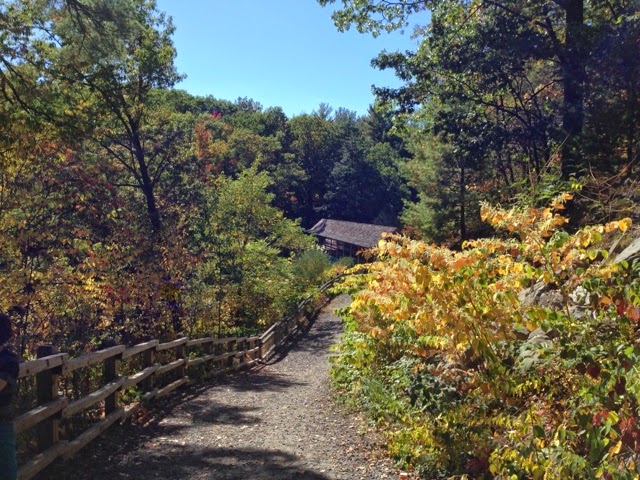 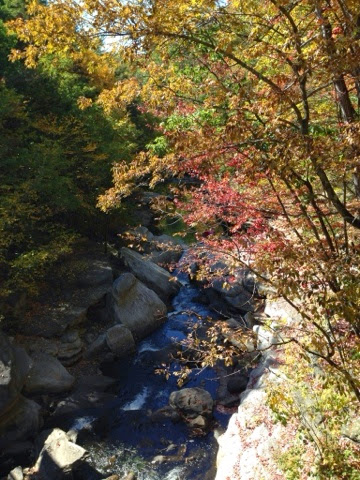 Last night, Jon's son Atticus came to spend the night.  I was quite touched to see old Oso in Atticus' suitcase.  I gave this bear, as is my tradition, to Atticus on his first Christmas.  I must say no first Christmas bear of any other grandchild has seen the adventures this bear has seen.  He lived in Colorado to begin his life.  He then moved from there to Boston.  This dear bear, Oso, already rather travel worn, made his way to Bangladesh.  After a year and a half there, Oso, always at the side of Atticus, flew over the North Pole and home to the United States.  After living in Boston, he made his way to Pennsylvania.  I was glad to see this old friend from my grandson's earliest days. 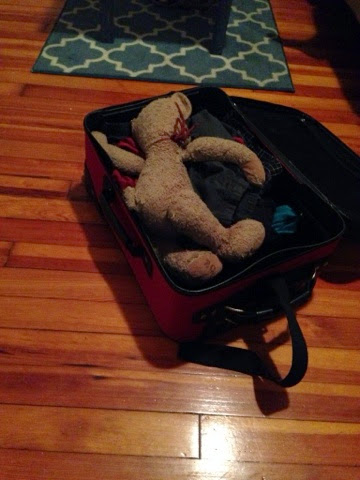 Life seems complete when I have my kids by my side.  It is good being here cooking meals, driving my son to school on some days, he drives on others.  I try to keep the house running as he keeps up with his school work.  He tires easily and comes home exhausted and ready to have a big rest before the evening activities, but each day he seems stronger. 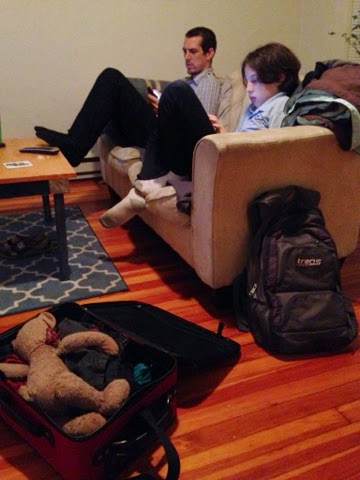 I will fly home next week.  I hate to leave.  My former husband and father of my children will come to spend some time with Jon the day before I leave.  He will be here for the next leg on this journey.

It is so hard when your baby chicks grow up and leave home.  They seem to go to such far away places.  The miles separate us, but in this day of modern technology, we are only a text or a phone call away.  For that, I am also grateful.

In the end, as a mom I've learned I must ultimately leave my children in hands that are much greater than mine.  They are all prayed over, and prayed over some more.  Whether they believe in my prayers or not, that does not matter.  I pray for them.  Each of them.  Everyday.  And, I thank God that I was blessed with each dear life.  Being a mom is hard, even when they are all grown up, but being a mom, I also know the rich blessings that I have in being a part of the journey that each child is on.  Their stories are intertwined with mine.  They are part of the story of my life.  We walk down this path together.