My former mother-in-law passed away last week.  She was nearly 89 years old.  I first met her when she was a young 41.  I was 21.  She became a role model for me.  More than that, she was a second mother.  I've not been an official member of her family for over thirty years, but our hearts were linked, so she continued to be a dear and important figure in my life.  I visited her when I could.  I loved her dearly.  This is my tribute to her.

Nearly fifty years ago I met her.
I don't even remember our first meeting.
It must have been not long after I met her son.
Was it when her son took me to his home where he lived with his parents after an early morning motorcycle ride or tennis game?
We worked nights together.
So, we would go on dates during the day.
Or, was it on a Sunday afternoon that I first went to the home of my former mother-in-law?
Time has taken the first memory of her away from me;
Time has preserved so many more memories.

Gloria Marie Christiansen was like a mother to me for a bit more than a decade and half.
The things she taught me remain forever in my heart and mind.

She was such a quiet, dignified lady.
Always proper,
she had a dry wit that would zing my mind and cause me laugh out loud.
When I first became a regular visitor to her home,
I felt so loud.
They were all so quiet.
She especially was soft spoken.
I am not quiet.
I am not soft spoken.
I am loud.
I doubt she, my former mother-in-law, ever raised her voice.
After my first born's birth, I told her that I could hear him crying louder
than any of the other babies in the nursery.
"Oh no, he will take after me,"
I thought.
She said, that it was normal to hear my child above all the other children.
She could always hear my baby's father's voice louder than any of the other kids on the block, she said.
Did we tune in to hear the voices and sounds of our own children over others?
Was this a mother's instinct?
I think she thought it was.

Later, she told me never to take up the side of your own child with another child's parent when the children were having disagreements.
"You never know what your own child did first," she told me.
That was wise advice.
I took it.
I followed it.
She followed this same advice when her son and I divorced.

In my mind, the image of her on the day her son and I were married 48 years ago is still very sharp.
We were engaged, but a wrench had been thrown in our plans for getting married when my former husband received orders to report to boot camp for the Army Reserves.
We knew the orders were coming, but didn't expect them so soon.
We went to talk to her about what to do.
Should we get married that day?
Should we  'elope' by walking across the street to the church to get married?
Could we find a church official to marry us on such short notice?
What time should we marry?
She just listened.
She didn't tell us what to do.
I see her sitting at the dining room table painting her nails as she talked with us.
Finally, she said,
" I wish I knew if we were going to have a wedding tonight or if I should start supper."
I guess that decided it.
We decided we would have a wedding.

The photo of so long ago is cracked and faded.
We all look so young. 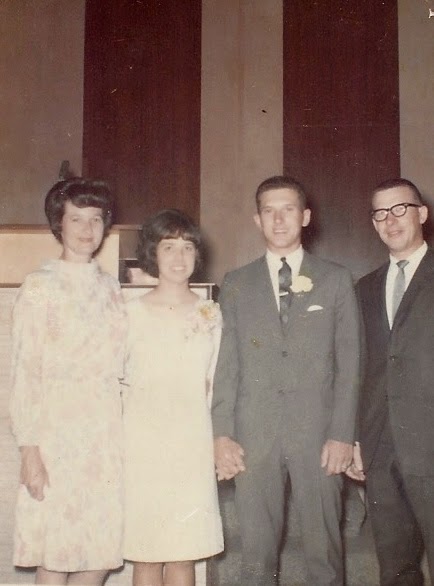 At our engagement dinner, she served liver.
I hated liver, but I ate it.
Actually, I could eat liver when she cooked it.

She taught me how to
can fruit,
and make apricot syrup.

I think of some of her great recipes:
cracker pie,
potato salad,
a tuna casserole made with Bisquick.
I remember all those Sunday afternoons in the summer when we would eat homemade ice cream made from the abundance of raspberries that grew in the garden.

The summer I married her son,
I had an apartment that my new husband never stayed in because he went off to boot camp.
I guess my mother-in-law thought I needed something to take up my time.
Not long after we were married, she delivered a basket of un-ironed, freshly washed shirts belonging to my husband to me.
I still smile at the memory.
I love that she did that.
Why should she iron them?
Now, that job was mine.

That summer, the summer of 1966 was a hot one.
I spent so many summer afternoons and evenings on the front steps of his parents' home that year.
His sister and I would eat the sour green apples that we covered in salt.
The apples came from the tree in the backyard.
No doubt my mother-in-law had carefully picked a few good ones for us to eat as we talked with her late into the evening.
My sister-in-law was pregnant and craved green apples covered with salt.
Good times.

Those steps we sat on,
how many times did I sit on those steps with my mother-in-law and other family members and talk?
If we went over for a visit, she'd say,
"Let's go outside where it's cooler."
Out we would go to sit on the steps and watch the happenings in the neighborhood.
We watched trees being planted,
children riding bikes,
folks walking to church meetings,
teenagers driving cars too fast,
and neighbors who were all a major part of her life.
She'd tell me stories about everyone on the block.
Not gossip, just good stories.
She told me stories of her life.
She was a great storyteller.
(Two of my grandchildren with their great grandparents on the front steps of their home. Parker is next to Grandma and Regan is on her lap.) I also remember that she would sometimes go out for a walk.
She said she needed time to
"air out her brain."
I think of that statement so often when I walk and think about all I have to think about.

She 'adopted' the elderly neighbors next door who never had children.
She took care of them until they died.

She had a grace and wisdom about her that I've seldom known in others.
When I'd have a new baby, on the first visit to 'meet' the baby,
she'd bring gifts for the other children too.
I remember her bringing a lunch box filled with treats to my firstborn when she came to visit his new sister.  She didn't want him to feel left out.  He got his gift first.

Her home was always tidy as a pin.
Nothing was ever out of order.
The walls were adorned with keepsakes and photos of her family.
The couch would always have lovely pillows and crocheted throw blankets on it.
I'm sure she always made her bed.
She did have one little secret.
We would be at her house for dinner.  We'd eat.  Then it would be time to do the dishes.
That is when she would open the oven.
It would contain dirty dishes from earlier in the day.
I would always laugh.
I don't know if she ever had a dishwasher.
That is where I stash my dirty dishes.

My former mother-in-law was a wonderful grandmother.
I'm grateful my children had her in their lives.
She was a constant for them.
She loved to have them visit her.
She loved to make things special for them.
Sometimes, she would take my children to the movies.
First, they would go to her house to pop corn.
Then, they would get all of her old purses from the 'dress up' play box.
Then, they'd fill the purses with popcorn to eat at the movie.
It makes me smile to even write of those days.
She'd have them over for the day to learn a craft, bake cookies, or have a picnic.
There was a closet full of toys when the kids were younger.
There was a box of old clothes for playing dress up.
Each event that involved a grandchild or grandchild was a special event where she made little sandwiches, or had a special activity planned.
She made each child feel special.

My former mother-in-law, whom I always called "Mother,"
was the best mother-in-law anyone could ever have.
She never interfered in my life.
She was always kind and loving towards me.
She always showed me great respect and much love.

I joined the LDS (Mormon) Church just before I married into this woman's family.
I left the LDS (Mormon) Church while I was going through the divorce from her son.
She never showed or spoke judgement towards me.
Never.
She continued to show me the same love and acceptance she had always given me whenever I would go to visit her in the thirty plus years since I was a member of her family.

I will remember all those wonderful family gatherings I had at her home.
I will remember how we always went to Salt Lake City to shop when the men went deer hunting.
It was the big event of the year.
We called it Deer Shop.
She had started the tradition with her sister years ago.
It continues to this day, even though the guys no long go hunting.

My Julie could have been her clone.
They looked so much alike.
Her prominent features are features I see in each of my own children.
This photo was taken of her with my girls just before Julie died.


Her dry wit, her humor, her intelligence were gifts to all of us.
She could play by ear nearly instrument she picked up.
She wrote her school song many years ago.

Today, she was laid to rest.
Her funeral service was held in the exact same spot where I married her son 48 years ago.
All of my children were there.
Sadly, I could not make the trip due to other commitments.
As her dear husband remembers her,
and as others remember their dear mother, grandmother, aunt, great grandmother,
I too remember and honor her.

She was a
caring,
giving,
gracious woman.
She blessed my life, and the lives of my children and grandchildren in countless ways.
We all will miss her greatly.