It's Been Snowing, But I'm Not Snowed In

It has been snowing in Colorado.  I know that the calendar says that it is April, but the calendar alone is not a predictor of the weather.  In fact, I've been thinking that it would be best to throw the calendar away and not even be aware what month it is.

I've lived in or near the mountains for much of my life, so I'm not really surprised when it snows in March and April.  In fact, I plan on the heaviest snow falls of the year to occur the last week of March.  I even expect snow storms in April.  I just expect them earlier in the month.

I see photos of flowers and trees blooming, and think that a different version of spring would sure be a welcomed treat.  I'd like to be rid of winter-like weather, but the weather doesn't seem to care one bit about what I want.

This morning I have such a beautiful snowy view out of my window.  The sun is again shining, and there are hints of blue.  The rooftops are covered with two or three more inches of snow that fell over night.  We've been this pattern of snow followed by a bit of sun for days.

Sunday morning, I watched a little bunny rabbit that lives near my house as she was digging deep into the snow looking for food.  She found something that kept her nibbling for quite some time before she hopped over to the bare barberry bush next to her and started nibbling on it.  Now, I know why my newly planted barberry bushes did not do well last year.  The neighborhood bunnies feasted on them. 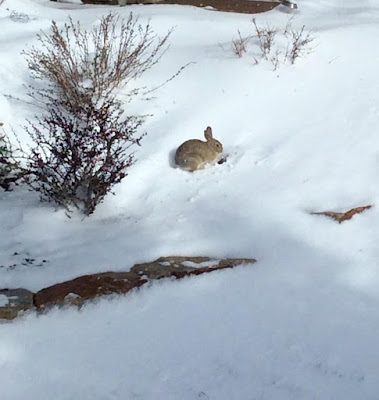 Yesterday morning the snow was nearly all melted.  I saw that there were new green shoots of a perennial coming up in my neighbor's yard where the bunny had been lunching the day before.  I also noticed how green the grass is becoming thanks to the moisture provided by the snow.  The daffodil blossoms  are spent, and we don't have tulips in our neighborhood because the deer eat them.  The moisture that we have gotten from the snow is quite welcomed.  I must keep that in mind.  May flowers need moisture.  In Colorado, that springtime moisture generally comes in a more solid white form than it does in other areas of the country.

Blogging has taken a back seat in my life as late because working on the computer has bothered my eyes.  On March 31st, I had cataract surgery on my right eye.  It seems to have been quite successful, but I find I still don't handle the glare from computer screens, my iPad, and my iPhone that well.  Today, April 19th, in just a few hours, I will have the cataract on the second eye removed.   I will be glad to get these two surgeries behind me.

I will be rather limited in reading and writing for another week again.  That is the hard part!  My husband downloaded a book, The Escape From Auschwitz, by Joel C. Rosenberg, for me to listen to on Audible after the first surgery.  I am half way through the book.  It is quite an interesting and intriguing book.  I will again be listening to the book for the next couple of days.  I then hope to have a successful recovery and be back to reading and writing again soon.

Since I can't bend from the waist, or do strenuous activity for at least a week after the surgery, it is good for me that we have snow and cold weather.  By the time the sun appears again, I hope to be out in the yard planting more flowers and plants and hoping I just not planting things  for the bunnies and deer love to eat.
Posted by Sally Wessely at 8:21 AM 19 comments: