Happy Anniversary to The Man I Love 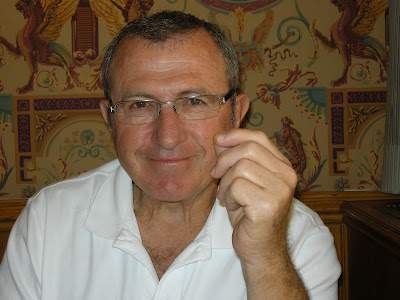 I love this man.

Look at that face.

Do you see the kindness there in those twinkling brown eyes?

Can you see his great personality when you look at this warm, winning smile?

Do you get a sense of the stability this man brings to any situation?

Does this look like a face you can trust? 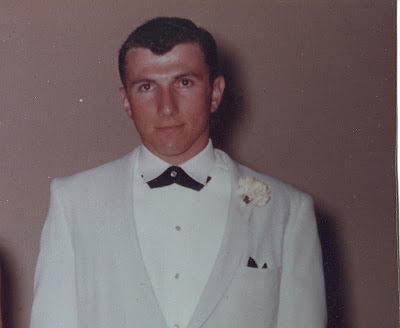 This is that same man when I first met him over 50 years ago.

He hasn't changed a bit.

Those kind brown, twinkling eyes have remained the same.

That warm, confident, reassuring smile is much the same.

He has been seasoned over the years.
That has only added to his capacity to be just the man I need in my life.

I love this guy.


I guess I've always loved him since the day I met him when I was just sixteen.
I was a shy young sophomore girl in those days.
He was a very popular senior, a leader in the school:  King of the Sock Hop, president of the junior class, a great football player, loved by students and teachers.

We are as different as from each other as we can be.

Thrown together in the great melting pot of a public high school, we came from totally different backgrounds.  He was the only and much loved son of refugee Jewish parents, who was born just a few years after they escaped from Nazi  Germany in 1939 by traveling through Russia, China, Japan, and across the Pacific Ocean, to settle in the United States.

I was the second child, and oldest daughter born into a Presbyterian family.  On my father's side, my family came to the United States from the Isle of Jersey to settle in Salem, Massachusetts in 1676.  My family fought in the Revolutionary War, the Civil War, World War I and World War II.

Jim's father was an urban German Jew who had fought for Germany during World War I.
He was just a few years younger than my paternal grandmother.
He spoke mostly German, and his English could be difficult to understand.
His father's mother died in a Nazi concentration camp.
He never learned to drive.

He practice Judaism until he died in 1966.

Jim's mother came from a very wealthy family who owned a cigar factory in Germany.
They lost everything during the war.
His mother took her nursing training in Switzerland.
She later became the first Psych Tech to be hired by the Colorado State Mental Institution.
She learned to drive.
She converted to the Mormon Church not long after arriving in the U.S,
She died in the early 70's.
Her parents, quite elderly, made the journey from Germany in 1939 with Jim's parents and and his older sister.  They did not have the papers to enter the U.S. at the time and spent a number of years in Cuba before the family was reunited not long after Jim was born and just before his grandparents died.

I was raised in a home where my parents sent me to the United Presbyterian Church where they were married.  They didn't always go with us in those years.

Jim was raised going to both the synagogue with his father and to the Mormon Church with his mother.

Jim asked me to marry him three times between the time I was sixteen and twenty-one.
The last time he asked me to marry him in those early years was three days before I married my first husband.
He said I was making a terrible mistake.
I thought of Jim as my first love.
I would always love him in that way.
He had always treated me with respect,
He was always protective of me.
He loved me dearly, and I loved him too when we were in high school.
I knew he was steady, honest, full of integrity, held a college degree and would have a promising future.
I wanted someone more exciting.
The excitement wore off in that first marriage.
(That is another story.)
Let's just say that Jim was right.

When he asked me to marry him the fourth time, thirty years later, after I had been single for ten years, and he was newly divorced, I had the wisdom to say, "yes."

We were still as different from each other as we could be.
While he was not actively practicing Mormonism at the time of our marriage, he had gone to BYU, had been a bishop, had married the first time in the LDS temple, and had sent his children to BYU.

I had joined the Mormon Church when I married my first husband and had married him in the LDS temple.  We had five children together.  We had divorced after 15 years of marriage.  I had left the Mormon Church and become an active evangelical Christian.

My children are rowdy.
When they were younger, one could not walk across the room without another tackling the one walking and having a wresting match.
Mine love to argue about politics with each other.

Jim's girls are quiet and reserved.
They always have good manners.
I don't think they ever argue.

Jim never rocks the boat.
In fact, he is the one keeping the boat steady while calming all those on board.

I was born rocking the boat.

Jim is a single topic reader.
He reads only thrillers.
He loves to watch television.
He especially loves to watch anything that has a thriller slant to it.

I read all kinds of genres.
I hate to watch television.

Jim wouldn't think of camping.
He likes to stay in expensive hotels.

I love to garden.
He wants a condo with no yard whatsoever.
I plant new and different plants.
He thinks they are weeds and sprays them with weed killer.

I love to entertain.
He would just as soon not entertain.

I love to travel.
Jim loves to stay home.
He hates to fly.

How have we ever managed to stay together this long?
How can two opposites maintain such a loving marriage?

Tomorrow, we will celebrate 20 years of marriage.
The celebration started a few months ago when he surprised me with a new diamond ring from Tiffany's.
This past weekend he took me to a fancy room for a few nights at the Brown Palace in Denver where he spoiled me rotten.
I felt very pampered and did not want to come back home.

We took in a Rockies game at Coors Stadium.
We ate wonderful meals.
We did a lot of walking around downtown Denver visiting a few of our favorite places.
We sat in our room and read.
We laughed a lot.
He held my hand just like he always has.
He smiled at me with eyes full of love and support.
We left our problems behind.
We celebrated our lives together.

We have made it because we deeply love and respect each other.
I guess we have filled in the gaps for each other.
His strengths are my weaknesses, and vice versa.
We have always supported each other and been loyal to each other.

This past weekend, we gave thanks for making it through a couple of rough years
of loss, grief, illness, and injury.

We are together.
That is all that has ever mattered to us.