My goal is to get this Christmas thing wrapped up before it is a month after Christmas.  I partly write these posts for family history.  I realize that the news is old, but writing blog posts become a repository for memories that I don't want to forget.  So, bear with me.  I'm nearly done with these Christmas posts.

This was an unusual trip to Utah for us.  Over the past fifteen years, we have always spent most of our time in Utah in Ogden where both daughter Keicha and son Ryan lived.  Now, Ryan is living in Bountiful which is between Salt Lake and Ogden.  This trip, we mostly stayed in Bountiful and did not make the twenty mile trip to Ogden but a few times.  This meant I didn't get to spend as much time with daughter Keicha and granddaughter Gillian as I would have liked, but we did get to have lunch a few times, and we went on quick shopping expedition so Keicha and Gillian could spend their Christmas money.

On that particular day, after a nice lunch with Keicha, I was able to also drive out with Keicha and Mike, Keicha's boyfriend, to see a project he has been working on for work.  As part of the responsibilities for his job, Mike is working on building a place where boys that are in treatment for addictions will learn woodworking.  (He works at a treatment facility as a counselor.)  These boys are using the skills they are learning to build an enormous skateboard ramp.  This ramp is connected to the wood shop and another shop where skateboard supplies are sold.  The boys in treatment work in the shop.  Mike is teaching these young men woodworking skills.  It is all quite impressive and a worthy endeavor.

Another day, I had to make a lunch trip to one of my favorite lunch places, so I called my daughter and invited her to go along.  The draw of the restaurant:  Mormon muffins served with honey butter.  Yum.  It is sort of a tradition for Kiecha and me to go here for lunch when I am in town.  Attached to this lunch place is a fun shop where I once took my children shopping for Christmas ornaments when they were young.  I have many happy memories of this place over the years.  Here is my lovely daughter at our lunch. 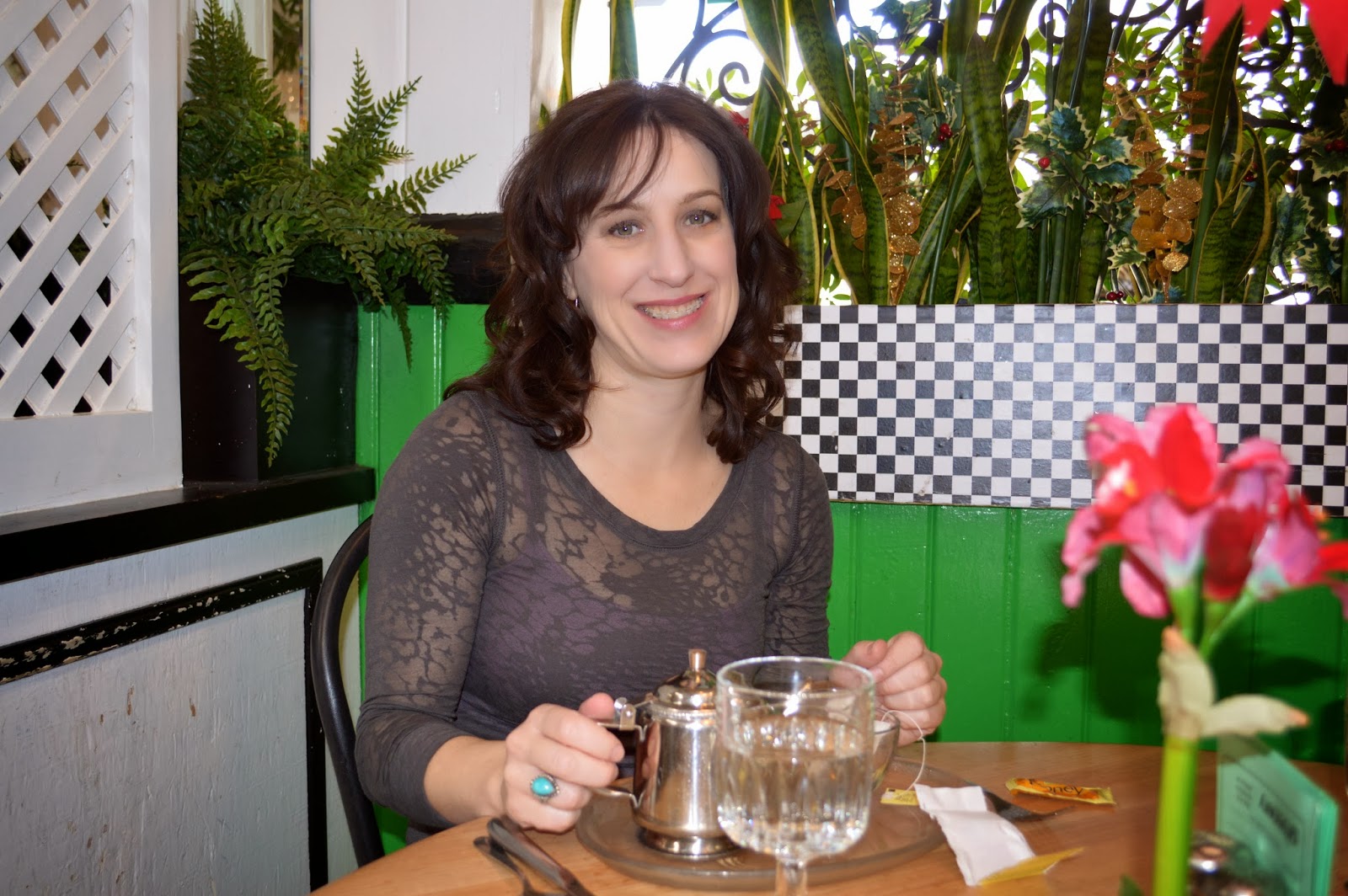 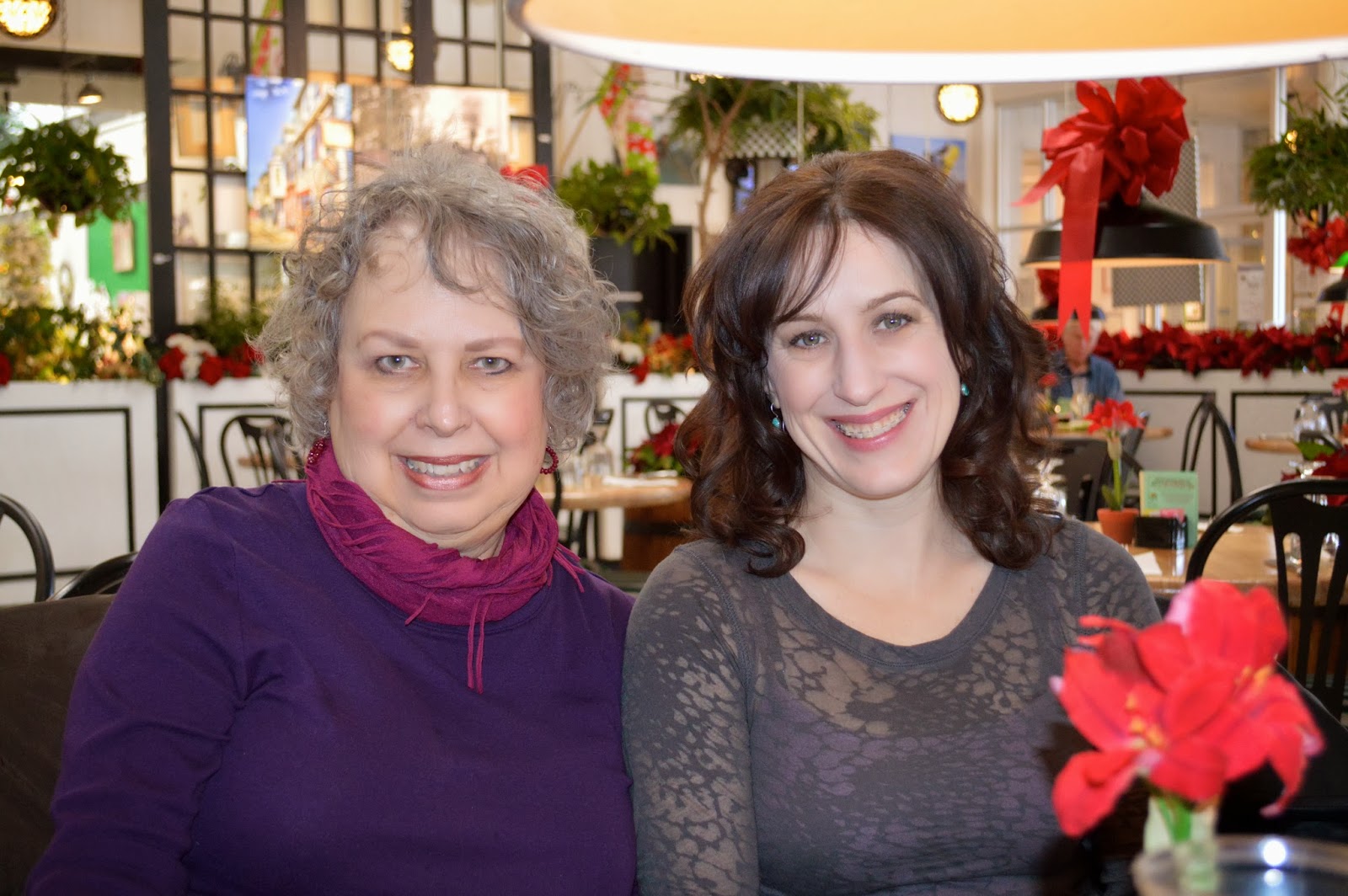 Of course we could not go to lunch without getting muffins to go. 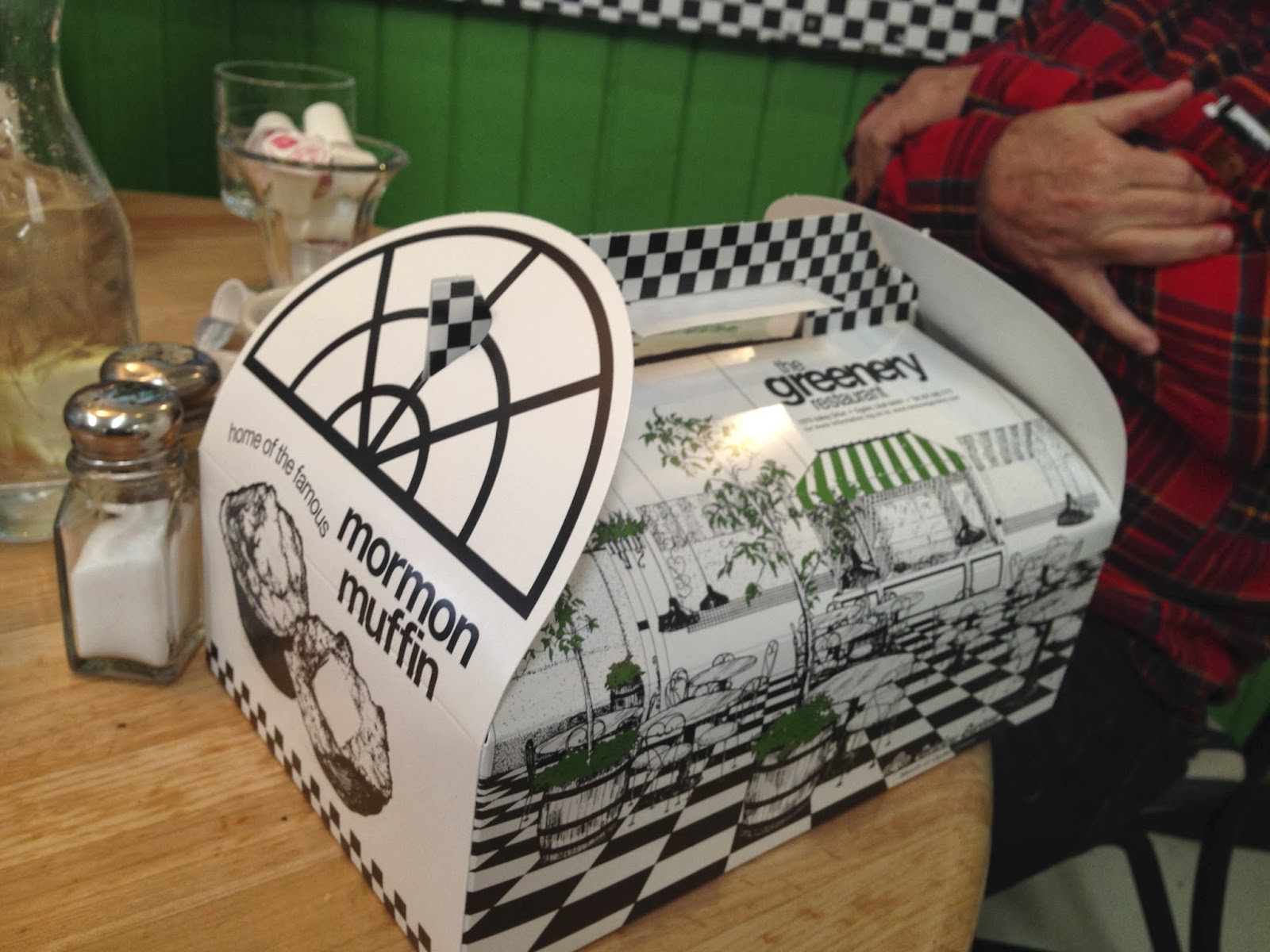 One day during our time in Utah, we went to Sheridan's shop in Salt Lake City.  I didn't take my camera that day, so I don't have any photographs.  I love to go shopping in my soon to be daughter-in-law's shop in the 9th and 9th area in SLC.  The name of her shop Hip and Humble more than aptly describes this great boutique.  If you live in the Salt Lake City area, you have three of these great boutiques to shop in.  There is a Hip and Humble in Salt Lake, one in Sandy, Utah, and one in Bountiful, Utah.  Sheridan is a partner with her sister in the ownership of these shops.  I'm proud of these two entrepreneurs.

As always, I can't go inside the shop without picking up a few things.  In fact, I bought that great looking scarf that I have on in the photo above at the Hip and Humble.  I also bought cute matching earrings.  And, I bought another great scarf.  It is an infinity scarf.  Sheridan, your shop is just too tempting!  I love your shop.  And, I bought a gift for my husband:  this cute picture to hang on the wall. 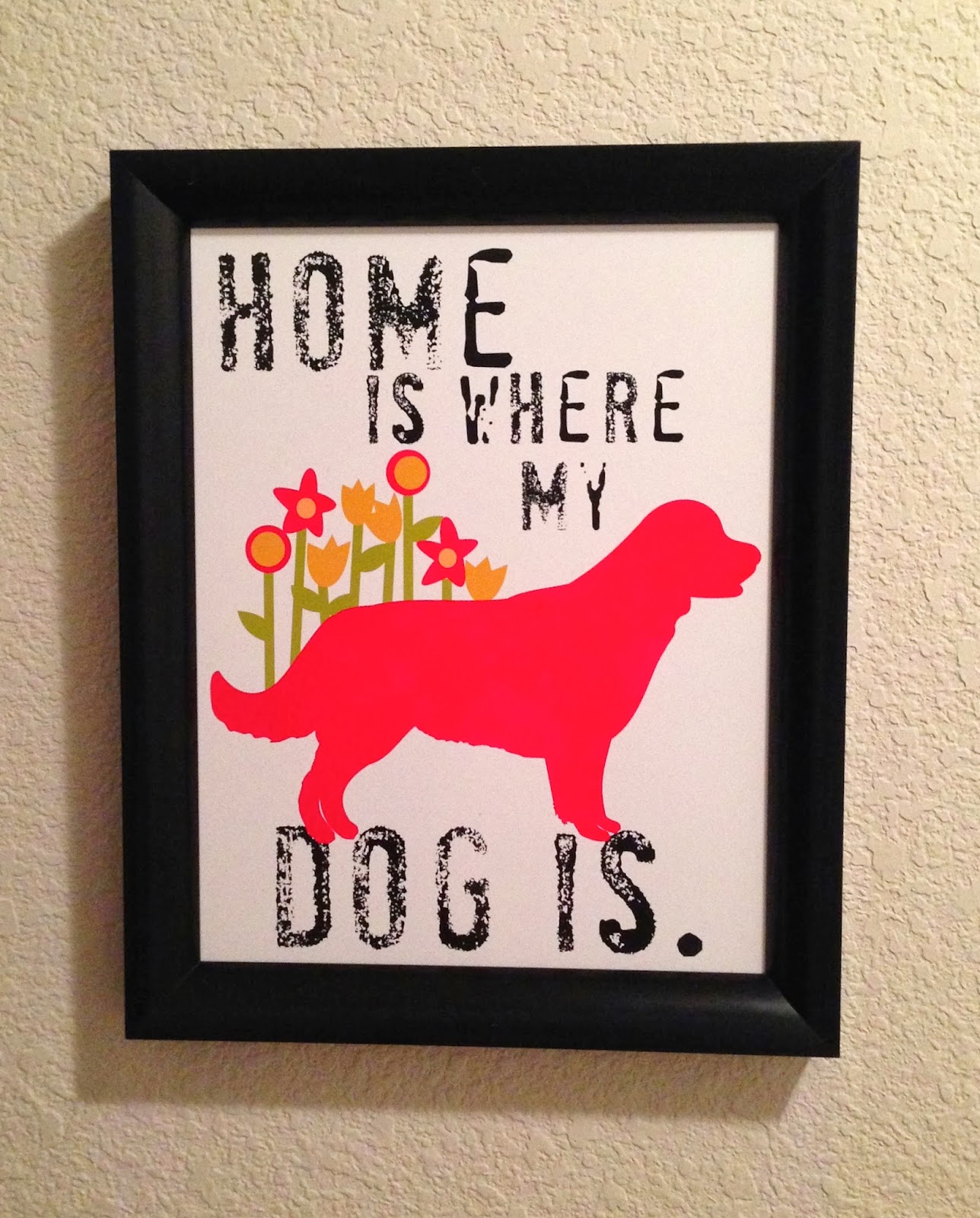 While we were on our trip, my hubby really missed his big red dog.  This saying is a true saying when it comes to my husband and Boston.  His dog does own his heart.

Jim and I combined family time in Utah with a bit of a vacation by spending three days in Salt Lake City at the downtown Marriott near the new City Creek Mall.  During out time in Salt Lake we continued to get together with family for fun activities like eating at special restaurants and going to the movies.  With the family, we saw The Hunger Games: Catching Fire.  Neither Jim nor I had seen the first movie in the series, nor had we read the books.  Surprisingly, we were captivated by the movie and quite enjoyed it. Then, the two of us saw Saving Mr. Banks.  We loved that movie.

Funny story:  On our way to see the movie early one evening, Jim and I walked past a restaurant we thought Ryan had told us about as being a place he wanted to go with us.  I sent a text that said, "Just walked past the Copper. Do you want to meet us there for dinner after we see the movie."  The reply, "Sure, we will drive down and get a table because it is hard to get a reservation.  Txt us when the movie is over."  So, when the movie was over we texted that we were on our way.  We walked a couple of blocks in the cold winter evening air to the Copper Canyon Restaurant that we had seen earlier.  The problem was that this particular restaurant was not crowded as Ryan said it would be, nor was Ryan anywhere to be found inside.  I called him.  He said the restaurant was right next door to the theater.  I said that was impossible.  We finally realized that Jim and I had gone to a different theater than Ryan thought we had, and I had not specified the name of the restaurant we had walked past in my text.  I just call it The Copper.  Talk about miscommunication.   That's what I get for shortening how many words I write in a text.   Number One Son soon drove over to where we were, picked us up, and took us the right restaurant which was the  Copper Onion.  Wow, what a neat place.  We had a wonderful "adult" dinner that night.

One day Jim and I spent the entire day just walking all over SLC shopping and enjoying a few special meals.  Our breakfast at Eva's Bakery and Cafe was outstanding.  Not only is the food delicious, but the ambiance is really special. 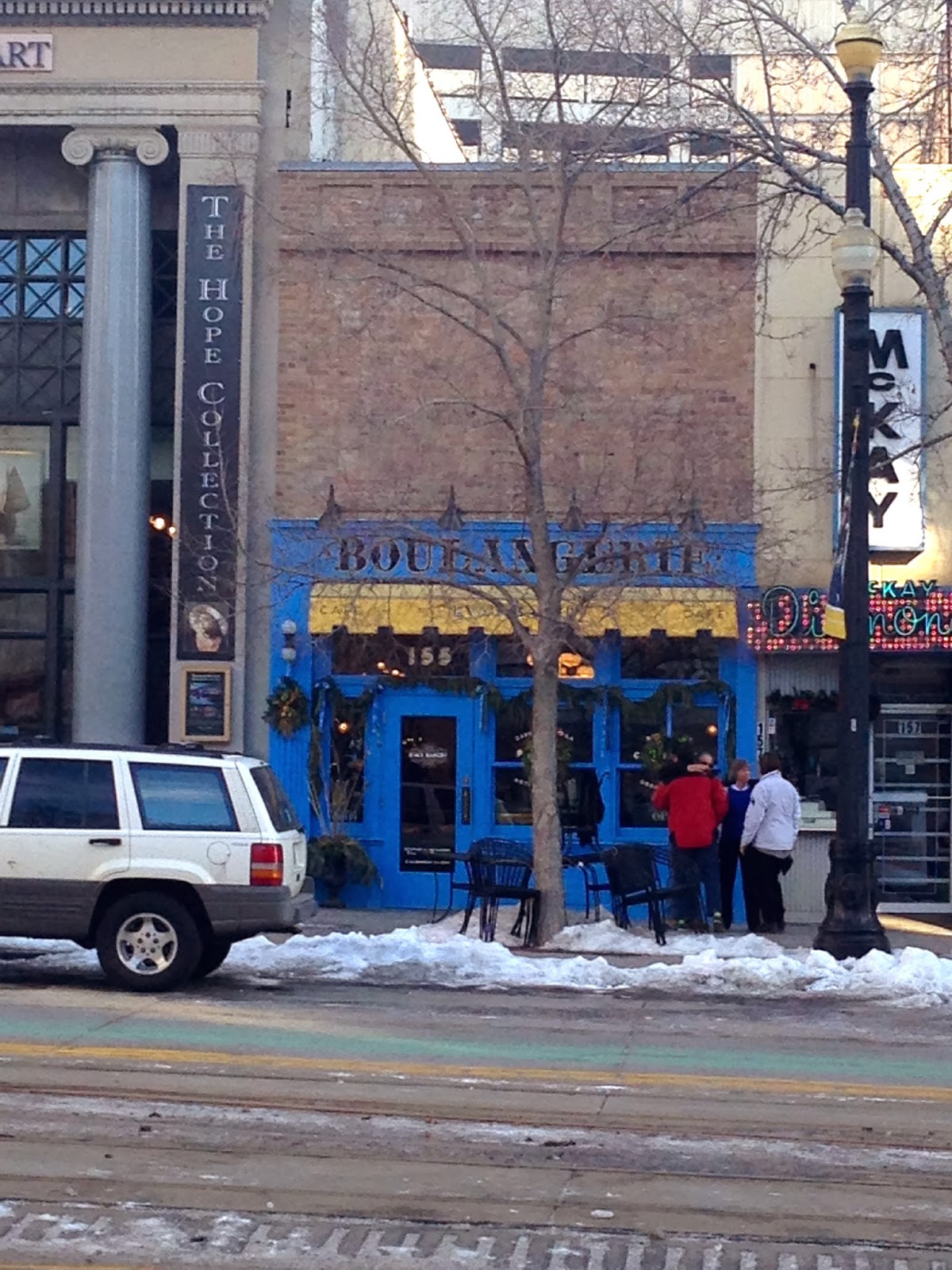 When we went inside for our leisurely breakfast, the weather outside was pretty awful.  It was cold and smoggy.  When we walked outside, I actually let out a bit of shout.  The sun was shining, and I saw something I had not seen in days:  our shadow. 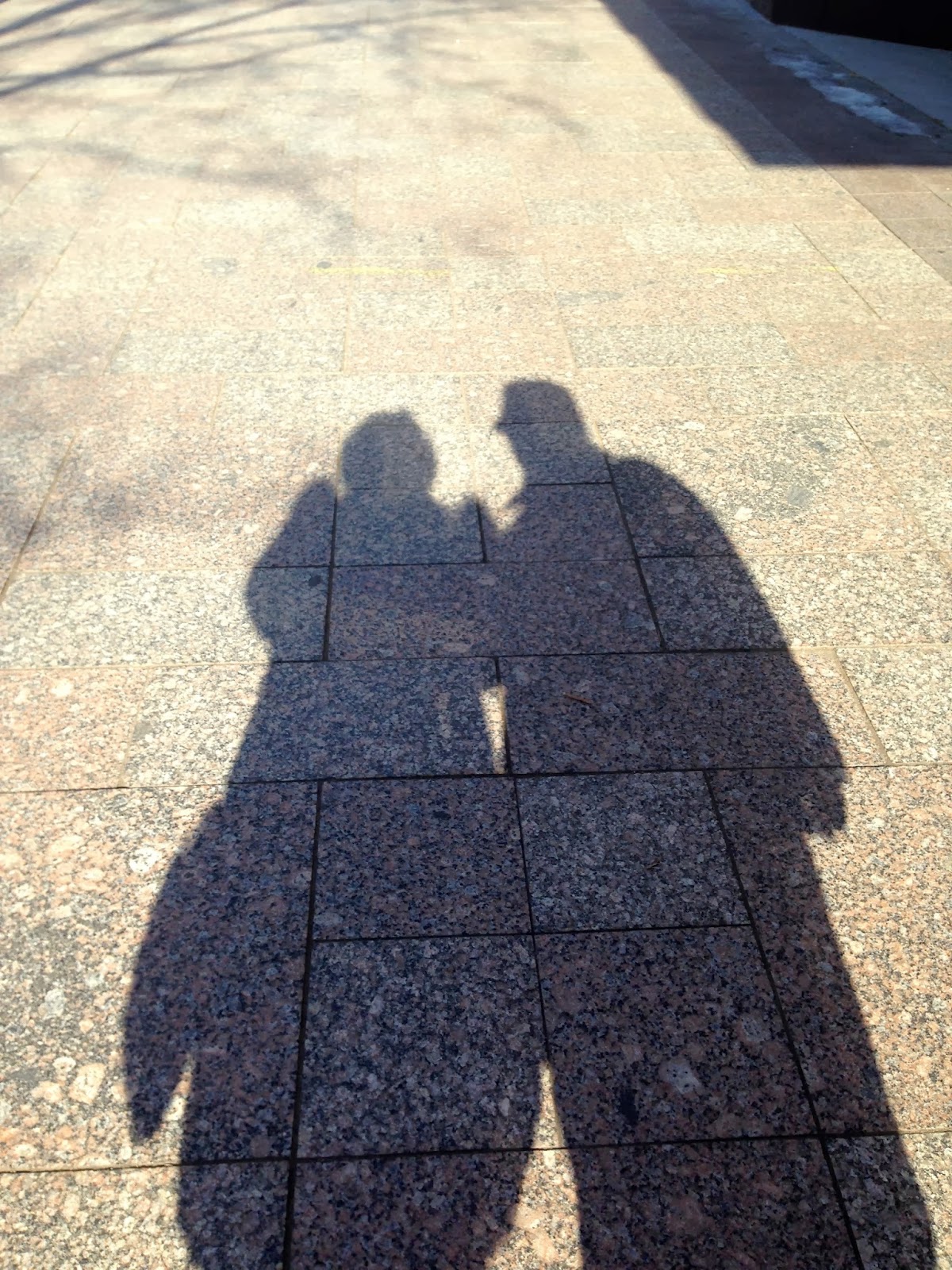 We spent the rest of day exploring the mall.  We had our shoes shined at Nordstroms. 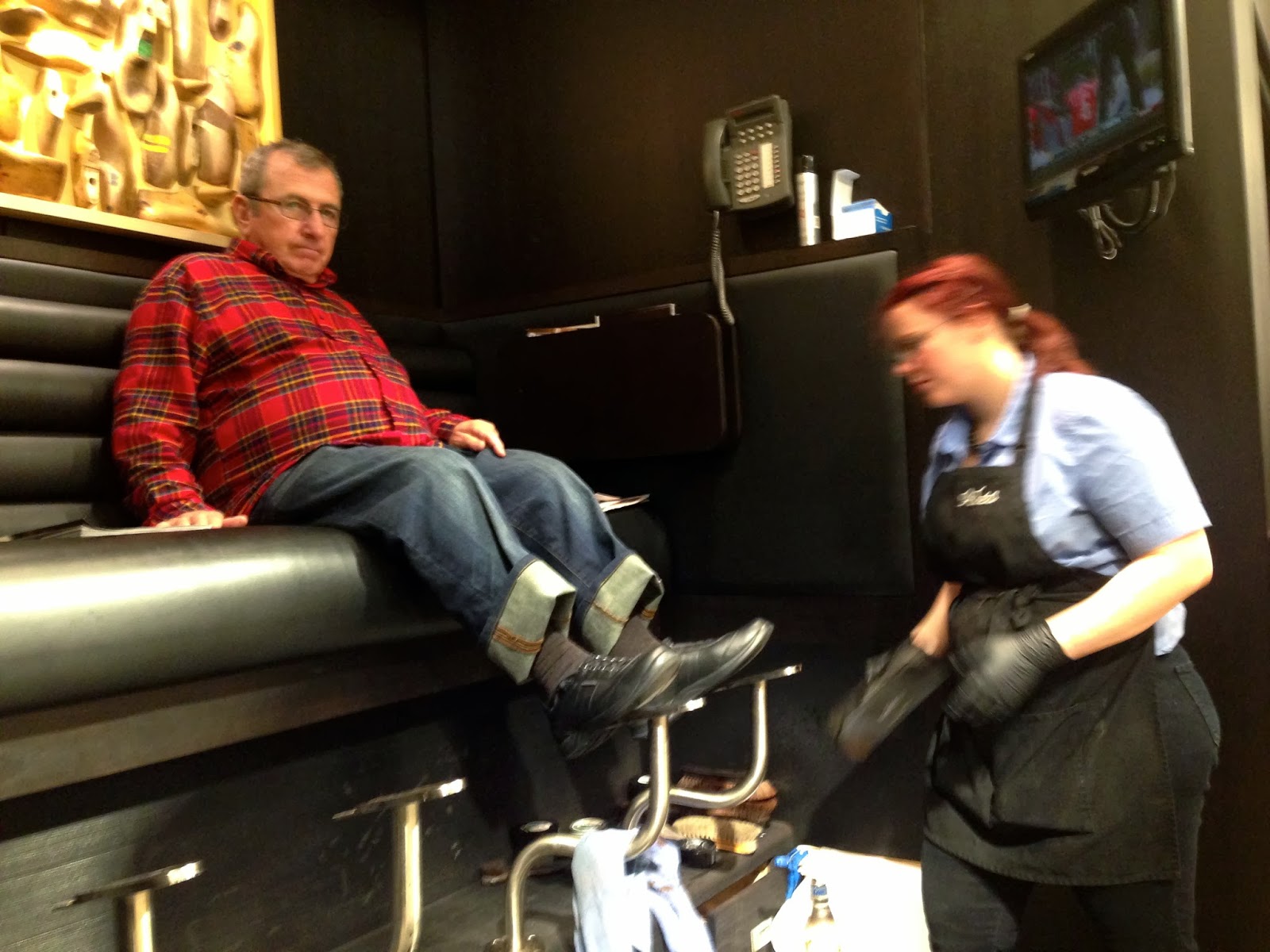 And, I bought my man a new hat.  It is a wool, water resistant cap made by Wigens. He had actually not brought a hat on our trip, and he needed one in the cold winter weather when we were out walking.  This cap even has earflaps.  So far, the cap has been worn daily as Jim take Boston on his walks.  He loves it. 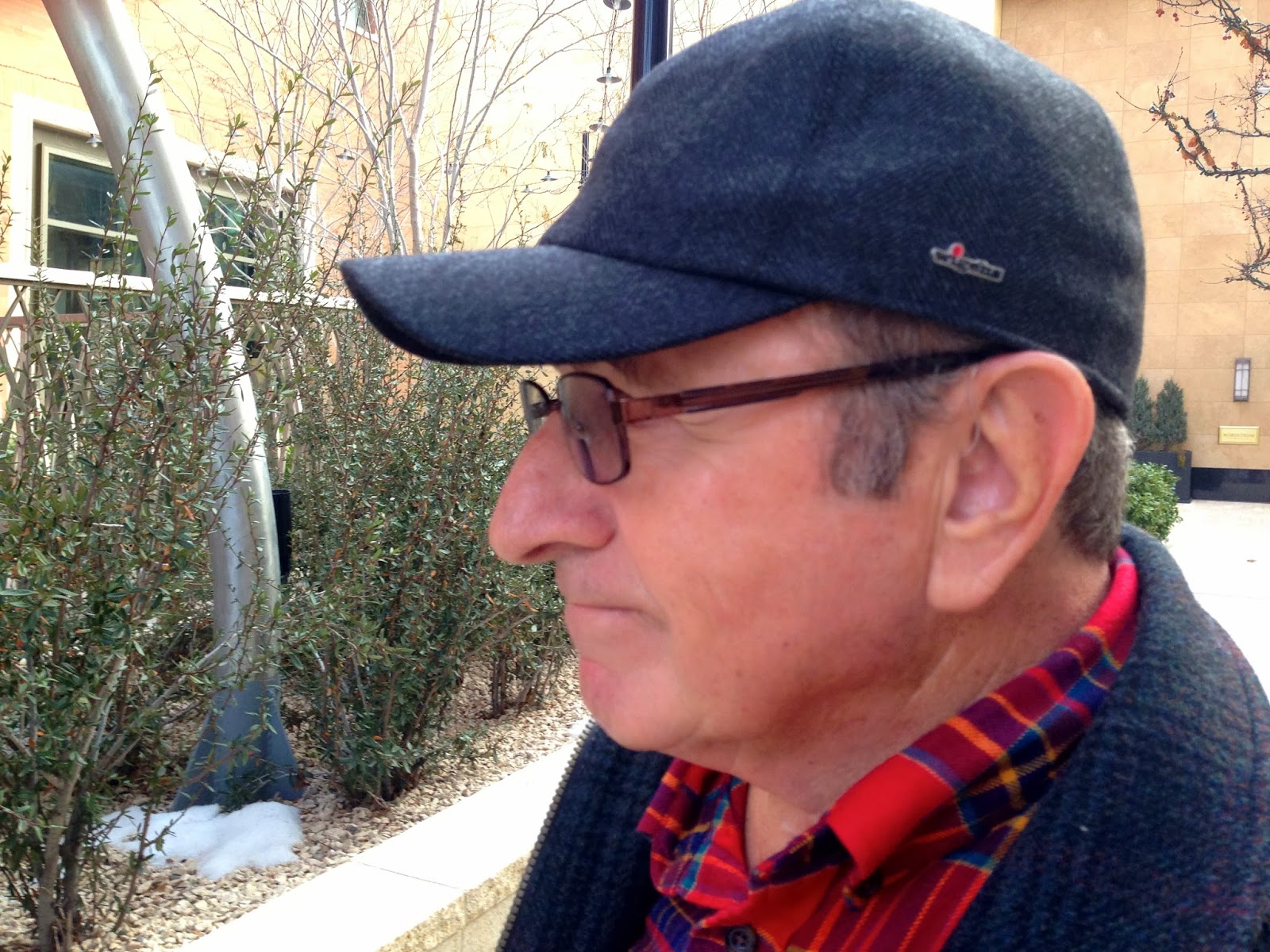 A few days after Christmas, Number One Grandson, Parker, decided to go duck hunting.  His dad and I had to take his gear up to him so he good go hunting.  Yes, this kid is a true outdoorsman.  Dad is putting the rifle in Parker's Subaru.  Parker has his boots.  He is set to go.  Yes, the hunt was successful. 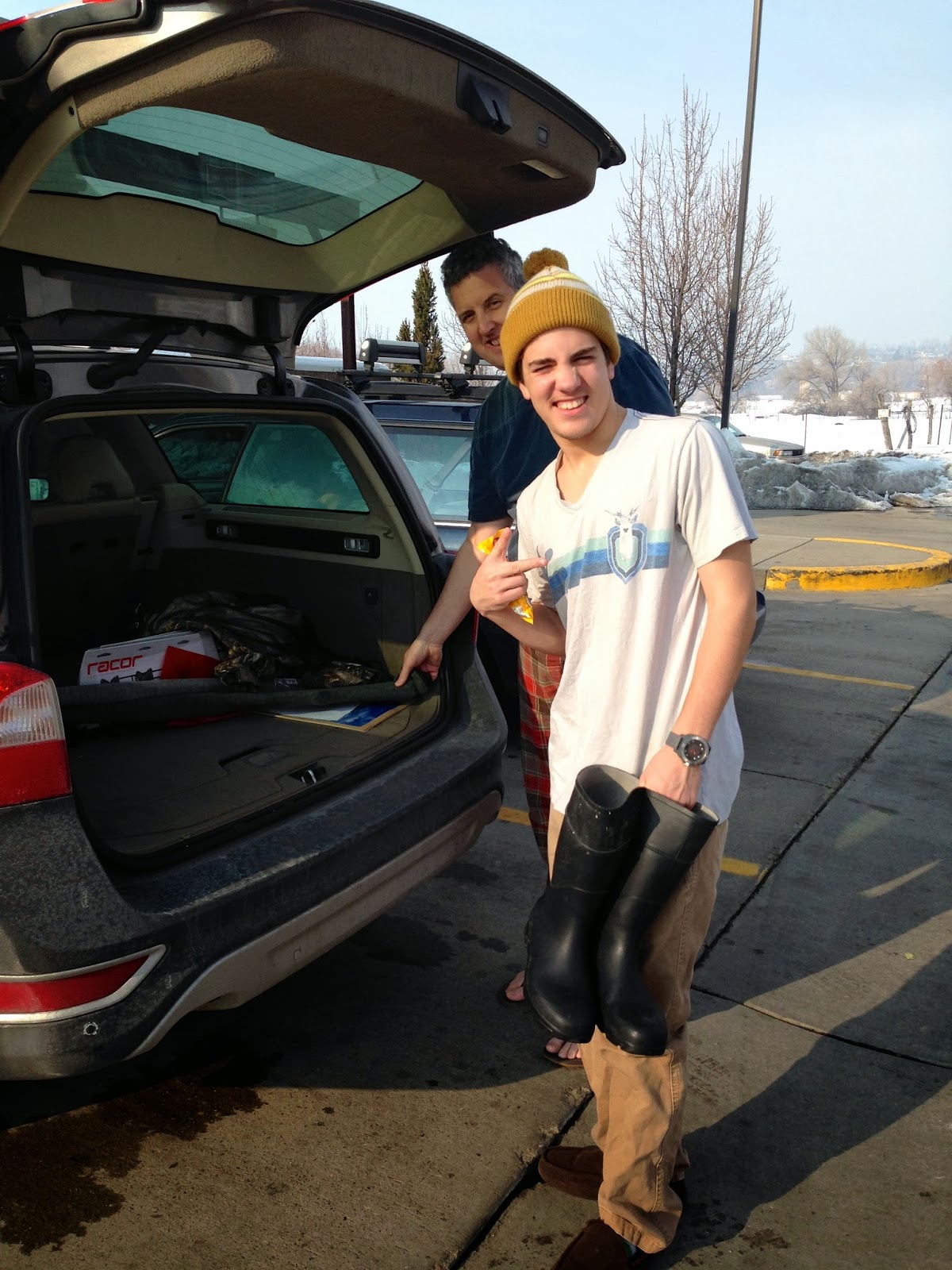 Before he headed out, father and son shared a quick conversation. 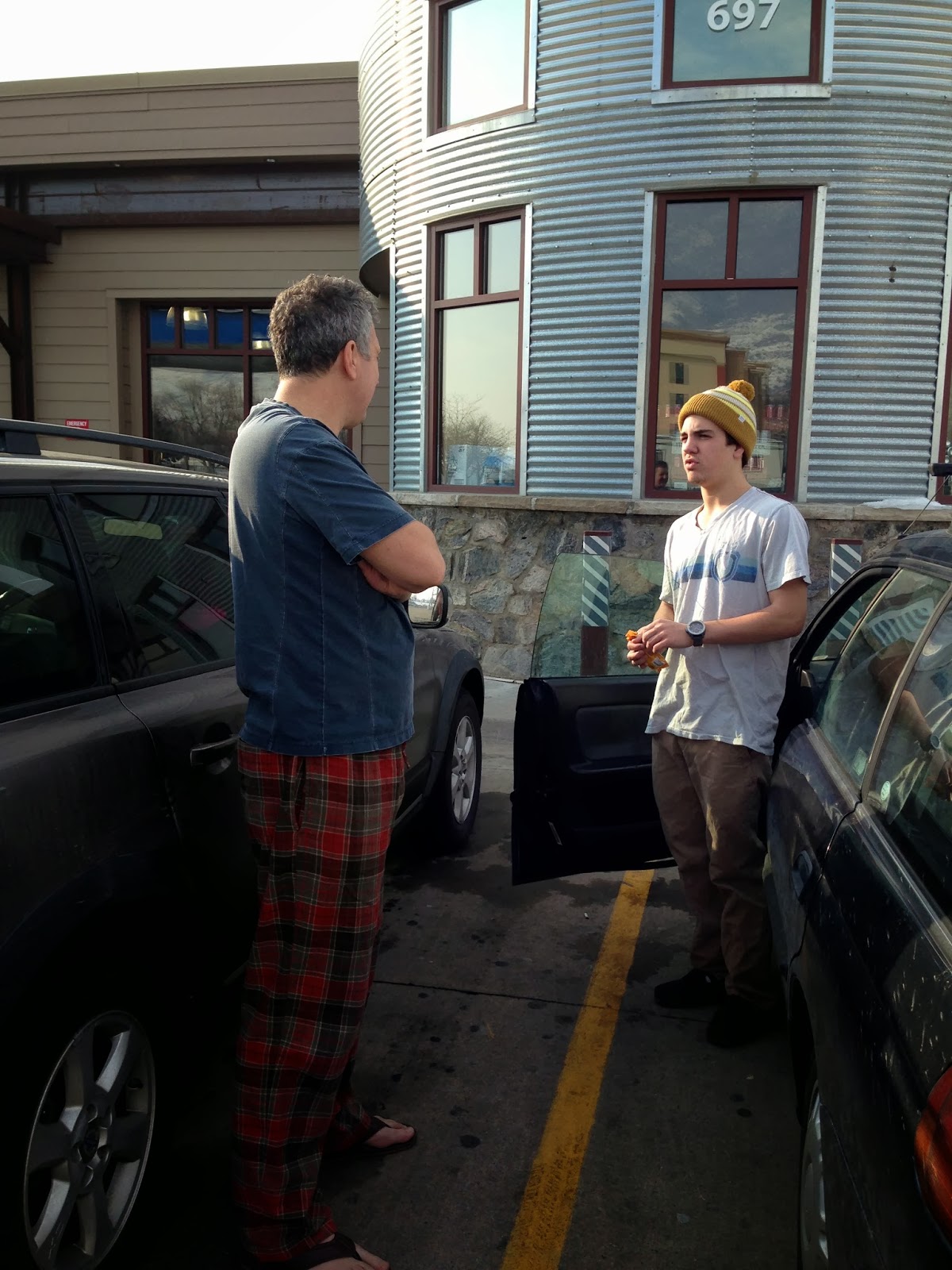 While we were in Utah, the flu virus that seemed to making its rounds around the nation did now pass us by.  The grandchildren were sick with terrible coughs.  I had just gotten over the same thing before our trip, and I had also just gotten over an ear infection, so I worried about getting sick again.  The air quality in Utah was poor.  This did not help matters for any of us.  Then, Jim got hit with a stomach virus that was especially nasty.  A few days later, on the night of the 30th, I also got the same stomach virus.  It was no fun.  I spent nearly all day of the last day of 2013 in bed in the hotel room very sick.  Later in the afternoon, on New Year's Eve Day, Ryan's children, Sheridan's boys, and Sheridan's niece and nephew came to the hotel where we were staying to go swimming.  I went down to watch the grandchildren romp and play in the water.  They all were having so much fun.  I couldn't help but begin to fill better just watching them all expend their great energy.  Soon, this old grandma was feeling better and smiling.

I did not want to miss the New Year's Eve party I had been looking forward to at Sheridan's sister's house.  By evening, I got dressed-up and off we went to ring out the old year.  I was not sorry to see the year go.  The party was great.  The food looked outstanding, but I wasn't quite ready to eat anything.  I enjoyed the party despite having been ill.  I especially enjoyed my visit with Sheridan's sister's mother-in-law. It was great to meet and get to know Ryan and Sheridan's friends.  Some of these friends had been Julie's friends in college.  It truly was wonderful to be at this party. 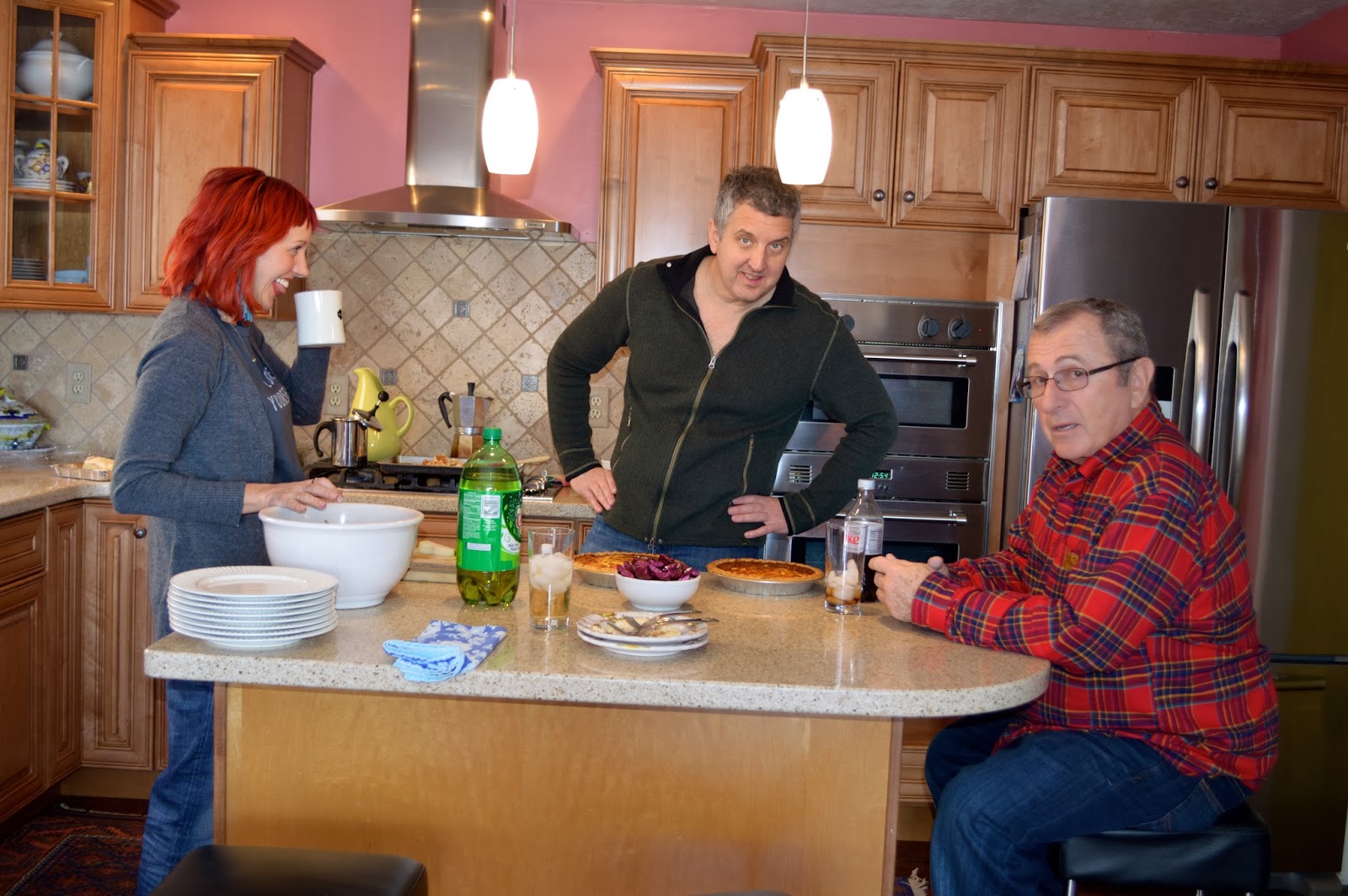 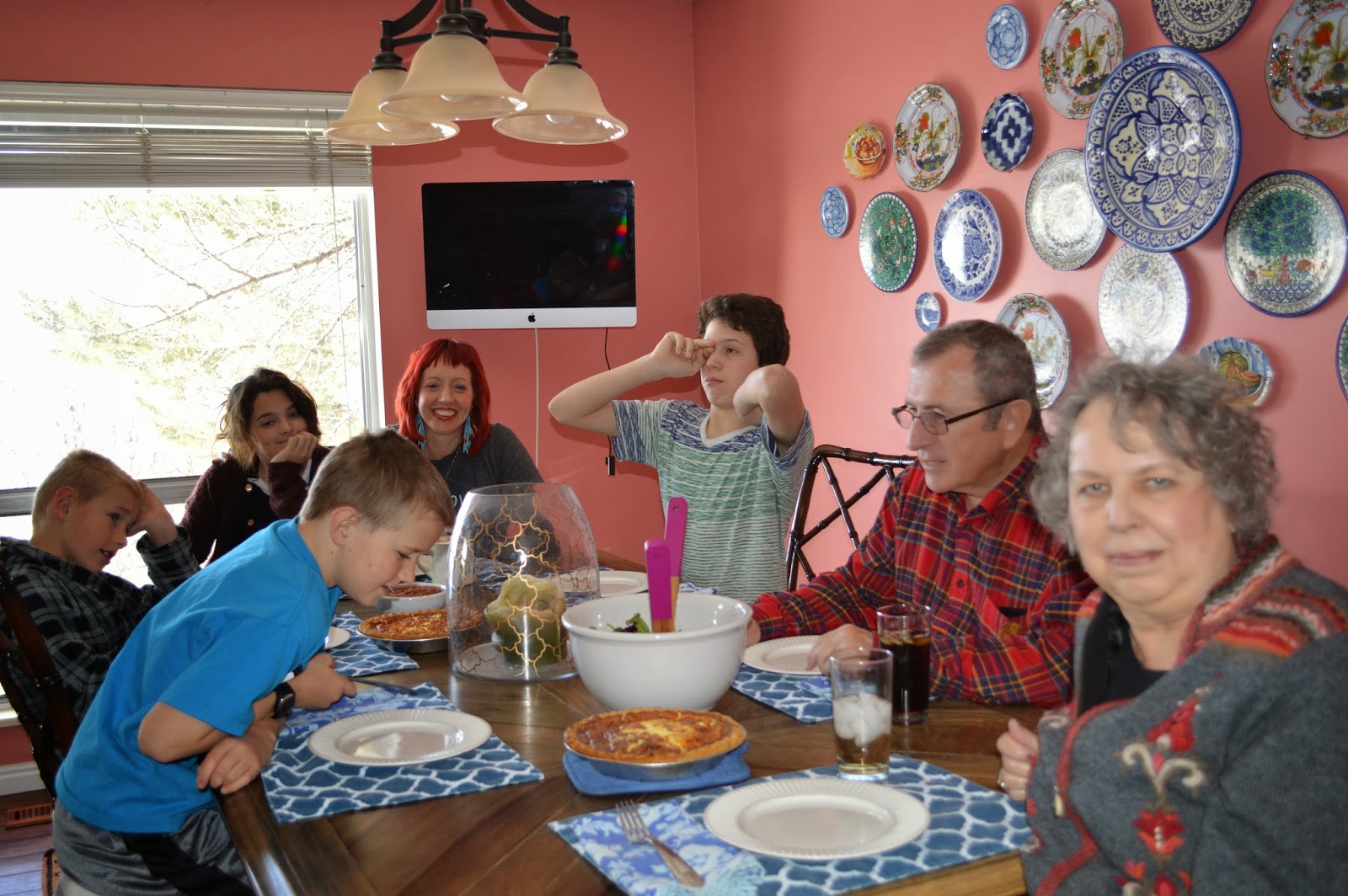 We were gone from home a total of ten days.  We flew out of Salt Lake City to return home late in the day on January 1, but we never made it home, which is only forty miles from the airport in Denver, until January 2.  Our flight was delayed due to storms in Denver.  The flight itself took one hour and one minute, but between the delayed flight itself and the weather that had hit in Denver, we decided to spend the night at the hotel at the airport when we finally made it back to Colorado at nearly midnight.

All in all, despite being sick, and being on the go nearly non-stop, our weeks long Christmas celebrations were really special this year.  I am just now catching up with life again.  We are moving into 2014 with full speed ahead.