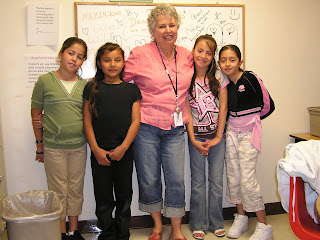 I am taking a blogging break.  While I heal from a fall, I won't be writing.  I am sharing a repost that first posted in 2008.  It is interesting to me to look back to see what I was doing a few years back.

2008
This year has been a very interesting year. I have done some things I have never done before, and I have had to adjust to a new stage in my life. I began 2008 by taking on a new job in Colorado Springs. This meant that I had to "go to work everyday" which my friend Don Weinhouse reminded me would happen if I took the job!

It was an adjustment to get up at 5:15 a.m. just so I could be on the road by 6:45. I had to be at Bricker Elementary at 7:30 a.m. This was a change. I no longer could roll into my office at the University around 9ish two or three days a week. (Speaking of my office at the University: My new classroom in the elementary school where I would teach ESL was smaller than my office had been at CSU-P.) This picture was taken on the last day of school in my classroom.

Despite the early morning drive, teaching elementary ESL was a great experience. I felt like I had truly gone full circle in my career by taking on this new venture. I began teachin 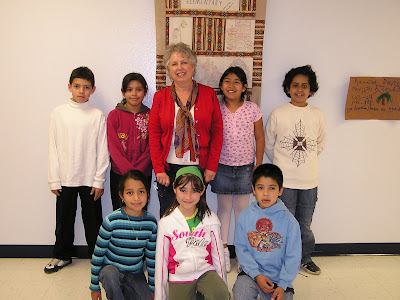 g over 40 years ago as an intern for Head Start the summer before my junior year in college. My real teaching career did not begin until 1995. From that time until 2008, I taught secondary students, 9 - 12, English or ESL.

In 2004, I left the classroom to go to CSU-Pueblo to develop the endorsement program in linguistically diverse education.  I loved writing curriculum, developing a new program, and working at the higher ed level.


It was a huge change for me to go from teaching teachers and future teachers to teaching second through fifth graders. I felt like I was out of my comfort zone, but I loved the entire experience. I had never really taught at the elementary level.

I loved the kids, the other teachers, and the principal and assistant principal. There were plenty of challenges, but it was good to be in the real world of teaching again. I loved the elementary setting also, but I also learned that I am a secondary teacher at heart.  I knew, as much as I loved those elementary age kids, I was most comfortable with high school kids.  I don't do the turtle in the classroom thing very well if you get my drift.  Teaching freshmen and seniors is where I feel most comfortable.

At the end of 2008,  I had to make the decision not to go back again when the school year ended. I would have had to give up my retirement, and I knew that I was not physically up to making the drive another year. I was sick nearly all winter from all of those new germs that float around an elementary school. It was like my first year of teaching all over again.
As soon as the school year was over, I was able to participate in the Southern Colorado Writing Project at CSU-Pueblo. For over eight years, I have wanted to take part in this project, but family needs and professional duties at CSU-P did not allow me to do so. Finally, as a retired teacher, I became a member of this wonderful project. I found that the National Writing Project, of which SCWP is a part, to be the most wonderful professional organization that I have ever experienced.

The month of June when I was taking part in the project was brutal. I was working from very early in the morning until 11:00 at night on my reading and writing assignments, but I loved it! The professional learning community of which I became a member is one that I will alway treasure. We had time and opportunities to come together as teachers and talk about our profession while learning how to become better at what we do.

Two of my favorite people, Lynette Lievers, a teaching friend from my days at Centennial, and Dr. Katherine Frank were our mentors. I made new friends, developed new professional contacts, and even developed an international relationship with two professors from Russia.

Wow! Now that I think about it, I wonder what I did with my life before SCWP. One night, my Russian friends, Irina and Tamara and I took some time off and went to dinner with Jim. I became quite close to both of these amazing women and really miss them!


I am continuing to stay involved with SCWP and will presenting at a conference at the end of January that Dr. Frank (Katherine) has put together. I am wondering what I got into because the featured speaker is Tom Romano. Educators know he is a very BIG name. I am really quite nervous about the whole thing.
In July I went to the Boston area to spend two weeks with son Jonathan and grandson Atticus. We had such a great time together. It isn't often that a mom gets to spend such quality time with an adult son. We did many of the tourist things that one does in the Boston area, but we also just got to hang out together and talk. This was a highlight of my year. Jon is such an awesome dad. He and Atticus have such a special relationship. I know the summer was hard on Jon as Samantha was in Bangladesh on a grant with the State Department again for the second summer in a row. I hope my time with him helped the time apart from Sam go a bit faster.
Another highlight of the year was a trip to Alaska with my husband Jim. I had always wanted to go to Alaska and was glad I finally made it. Since we went on a cruise, that also was an entirely new experience. I think in a way, we were both surprised we actually made the trip. We had a great time and I will forever treasure the memories that we made.

It seemed that this year was the year for some wonderful vacations. In October, I made a trip to San Diego. Daughter Keicha and granddaughter Gillian flew in from Utah just about an hour after I did. We spent the next three and a half days doing San Diego! As a double treat, I was also able to spend much of that time with my sister Suzanne and even spent one day with my niece Sarah. I truly don't know when I have enjoyed a trip more than this one - except of course for the two trips just before it! The weather was unbelievably warm. We felt like we were in paradise. What a blessing to be able to spend this type of time with my children and grandchildren.
Throughout the year, I have done some professional development for schools in the area and hope to do more this coming year. This keeps me busy and involved. I also taught the Secondary English Methods class in teacher education at CSU-P this past semester. I had a great group of students and enjoyed the class.

Finally, to finished out the year in a perfect way, Jim and I drove to Utah for Christmas. The roads across Wyoming were horrendous. I did most of the driving since Jim really doesn't feel comfortable driving in the snow. The wind blew snow across the roads between Laramie and Rock Springs and as the day progressed, the conditions became worse and worse. Thankfully, I had suggested that we make a reservation at Little American right after we left Laramie. (Thank goodness for cell phones!) We slid into Little American about 8:00 p.m. and were ever so grateful for that oasis in the middle of nowhere!
The time spent in Utah was picture perfect. Of course, snow that keeps piling up on Christmas Day always set the mood. I love being with my children for Christmas! I wish they all could have been there, but at least we were with the oldest two and four of my grandchildren.