My life as an educator 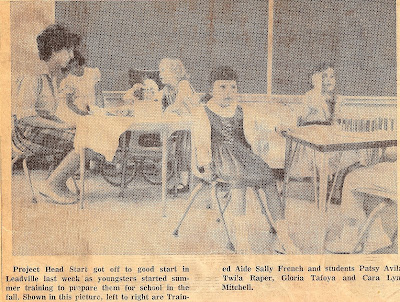 In 1965, the year I turned 20, I was just beginning my upper level courses that would lead to a degree in elementary education at what was then Colorado State College.  That summer, between my sophomore and junior year, I had the very unique opportunity to work as a tutor for Project Head Start in Leadville, Colorado.  I was a young, idealistic preservice teacher who jumped at the opportunity to work in a project that was aligned with my belief system about the value of education and economic opportunity.  While I never articulated my beliefs at the time in this manner, I was also a believer in social justice.  I firmly believed that it was only through education that those living in poverty would be able overcome the social and economic inequities that were found in our country at the time.

Those of you who may know anything about Head Start, may remember that in 1965, the Office of Economic Opportunity,  began the eight-week summer program that would launch
Project Head Start.  I was one of many tutors and teachers that were hired that summer to serve over 560, 000 children throughout the country in this newly created program.

I wish I had kept a journal of those days because now, nearly 44 years later, my mind is a bit fuzzy about it all.  As I stated before, I was young and idealistic.  I had great dreams about the kind of educator I would become.   As a young woman coming of age during the 60's,  I embraced the Civil Rights Movement and the "new" ideas about education, but I also respected and looked up to my mentors who had been in education for a long time.

My mentor for the summer of 1965 had also been my younger sister's kindergarten teacher the year or two before.  As a family, we already embraced Idelia B. Riggs as a gifted teacher.  As I reflect back on her now, I still consider her as the consummate educator, and as one the best with whom I have had the privilege to know throughout my entire lifetime.  She must have been in her sixties when I worked with her, and she had taught everything from kindergarten to college.  She had been the principal of a one-room schoolhouse at one point in her career.  She especially knew what children needed to grow and to prosper educationally, emotionally and socially.  She embraced the ideals behind Project Head Start and imparted them to me with all of the reasons why the program could be successful.  She said that the children of poverty in the area were beginning school without the skills that other children brought to school.  Sometimes, they didn't even know how to use indoor plumbing.  Yes, in 1965, in our program in Leadville, some of the children did not have indoor plumbing.  We had to teach them how to use the bathroom facilities.  They did not receive proper nutrition at home and many were undernourished.  They lagged behind their peers in knowing how to grasp a pencil or how to turn the pages of a book. Many did not know the alphabet.   They did not know how to write their names.  Many did not know colors or shapes.  They did not have group or personal social skills.  All of these needs would be met, as best they could be, by our summer program.  The program was comprehensive.  School readiness was achieved by giving the children equal portions of playtime, story time, art activities, and basic academic preparation such as learning how to recognize and form letters through reading and writing.

I have a vivid memory of the lunches that these children received.  The government's philosophy was that this program should have "maximum feasible participation" for success.  Therefore, those who would benefit from the program, the low income population, should help plan and run their own programs.  Many of the women whom planned and cooked the meals were the mothers of the children.  Everyday, they prepared wonderful meals.  I loved the Mexican rice we had nearly everyday.  To this day, I love the rice at El Nopal Restaurant in Pueblo because it tastes just like the rice from my Head Start days!  Believe me,  in those days the meals fed these children were good.  They are nothing like the terrible meals that are put together in an off-site place and served to low-income kids these days.  In the 60's, at the Leadville Head Start, meals included not only wonderful Spanish rice, they also included fresh baked dinner rolls or cinnamon rolls everyday!

Our lead teacher, Mrs. Riggs was a very practical woman who put up with no nonsense from anyone.  Her character was stellar.  She saw her role as an educator as one as a public servant.  She was not interested in feathering her own nest or building her career.  She was there for the children she taught and for the families she served.  In my mind's eye, I see her now.  She is wearing the apron she always wore over her clothes so she would have "a place for those tissues to wipe a child's nose or tears," or as a place to keep stray crayons, pencils or rubber bands that she might need while she was teaching.  She believed in expecting the best behavior and performance from all kids.  Patient, kind and loving, she was also demanding when it came to giving something your best efforts.  We ALL learned from her.   As I said, I could never have had a better mentor.  Mrs. Riggs, and the ideals of Head Start, greatly influenced my philosophy of my own role as an educator. 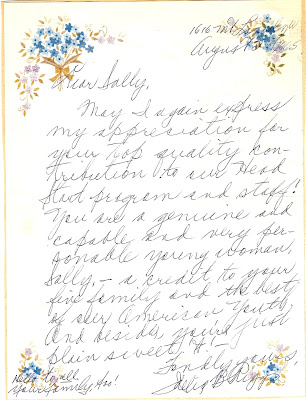 I am including a treasured letter that Mrs. Riggs wrote to me in August, 1965.  It reads:
Dear Sally,
May I again express my appreciation for your top quality contribution to our Head Start program and staff.  You are a genuine and capable and very personable young woman, Sally, - a credit to your fine family and the best of our American Youth.  And besides, you're just plain sweet.

**********
Today, I made Spanish rice for dinner.  It was good, but it was not the Spanish rice that those Head Start students' moms used to make for us each day for lunch.  For years, I've wondered just what that secret ingredient was that they use for the delicious flavor.

As I ate, I began to think of Mrs. Riggs and my that summer when I had the great privilege to work with her and learn from her.  How I wish I could discuss today's state of education with her.  I know she would have some very strong ideas on what must happen if we are to achieve the lofty ideals that we had in the 60's.

Posted by Sally Wessely at 4:30 PM No comments:

Email ThisBlogThis!Share to TwitterShare to FacebookShare to Pinterest
Labels: Head Start, Leadville, Life as an Educator

Where have I been?

I'm sure no one is asking where I have been, but I decided for my mental health, I would begin blogging again.  Why do you need to blog for your mental health, the reader may ask?  Well, I just read that blogging is good therapy for one blogger who writes about the stresses of being a chef's wife on her blog, http://chefswidow.com  I looked at her blog and decided she was right, blogging can be good for your mental health.
Retired English Teacher, that is me, has gone and accepted a job again.  I am working full-time, until the end of the school year, as a reading interventionist at an elementary school that is seven minutes from I home.  This should be a piece of cake.  Right?  Wrong!  Working has sent me into stress city.  I stayed home from work today for multiple symptoms of illness, including, but not limited to sinus and ear problems.  The doc at the emergi care place at first was all set on sending me to the emergency room for an evaluation of my heart.  Yada, yada, yada.  Been there, done that, not going back.  I insisted that I most likely was not having a heart attack; I just felt like I was, and by my symptoms, I made them think I just might be also.
After the doc checked me out, she concluded that my primary symptom was stress.  She advised that I call work and resign as of today.  I am sure she has a very valid suggestion.  Just thinking about returning to this job stresses me out.  Then, I also think about quitting.  This stresses me out.  The jury is still out.  My husband thinks if I want to quit, I should.  Then he reminds me of the salary I am earning.  My daughter, Amy, the one who seems to always have the best advice for me says, "You need to exercise to deal with your stress."  Of course she is right.
Most likely, I will have a long talk with my principal tomorrow, and then, I will take it day by day.  I also hope to blog(is that a verb?) to alleviate stress.  Hey, my fingers are getting some exercise, and so is my brain!
Posted by Sally Wessely at 3:09 PM No comments: