April You Bring Such Joy and Such Sorrow

The sun was unseen and unfelt, as I, clad in a heavy wool sweater, entered an office building for a recent late afternoon appointment.  For days, a mind full of thoughts all over the map regarding sundry problems in my life alternately vacillated between agitation and calmness. The weather, nearly always given to sudden and seemingly unaccountable changes in spring in Colorado, was not helping my unsettled feelings about those troubling thoughts weighing down my mind.

The day, one packed with activity and plans, was far from over when after the appointment I briskly walked towards the car.  Once out of deep shadows cast by the office building, I realized the sun was warming my back as I hurried down the street. As my mood lifted by the good visit and the sun at my back, my quick pace slowed down enough for me to glory in the beautiful spring scenes around me.

As I entered the building just an hour before, had I even noticed that the once brown bare bush branches near the doorway were now clad in green leaves? Why hadn’t I earlier drunk in the beauty of trees covered in fluffy white blossoms that lined the wide street on which I stood? 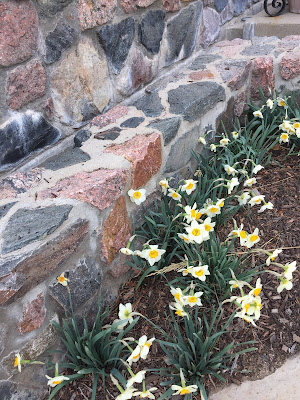 Since my husband and I had long awaited plans for the evening, I wanted to keep believing that the sensory input I was experiencing was true and trustworthy.  Sight, smell, touch: they all confirmed it was a warm, sunny spring day. I could feel the warmth of the sun.  I could see that Mother Nature had done her springtime magic by causing bulbs to emerge from their long winter’s nap in the earth. Hoping be eradicate any belief in the weather forecast of snow later in the day, I looked to the west.  Blue skies minus any clouds provided a beautiful backdrop for the snow covered mountains in the distance.  “No storm clouds are coming in over the mountains,” I told myself. Even the car temperature gauge reading of 70 degree supported my internal argument that surely snow would not ruin my day, and my mood.

Then, I turned around.  I looked south and east.  The forecast that had been in the weather for days was confirmed.  Sensory input coming from the direction I now faced, could not be denied.  A storm, not coming from the mountains in the west, but from the south and east, was brewing.  Dark, nearly black, low clouds forming and covering the entire sky to the south forced me not to be misled by only looking at part of the picture.

Logic, rational thinking, and experience caused me to turn and to look towards the part of the sky where the weatherman had predicted the storms would form. The evidence was clear.  A storm was on its way.

The skies above and around me provided a perfect metaphor for the juxtapositions we encounter in life:  Darkness meets sunshine.  Two extremes collide.  Springtime, a time of perfect juxtaposition between winter and summer.  Upon which image is one to focus?  Should one focus only on the springtime flowers and sunshine, or should one focus on stormy skies stirred into a fury by chinook winds which bring blizzards and destruction?

On the day I just described, I wanted to believe that the sun would keep shining.  I could substantiate that belief if I only looked at part of the evidence.

Placing images of sunshine, spring flowers, white blossom covered trees, and dark, threatening, moisture laden dark clouds driven by fierce cold winds side by side in my mind, a new metaphor began to emerge.  It was a metaphor for strongholds in the mind.
Strongholds in the mind remind me of spring.
They deceive.
They don’t tell the entire truth.
They ignore evidence,
believe false evidence,
or they only consider a portion of the evidence.

Strongholds of the mind are clung to as if they could save, rescue, restore, give peace.
They run hot and cold.
They are sunny one moment, and oh so stormy the next.

Strongholds keep us from living the life we were meant to live.

Strongholds are like March.
March, the madness of March, could nearly drive one mad.
The weather vacillates.

Soft mountain breezes whispering hope for sunny skies stir the daffodils one day.
Those same bright yellow flowers that brought such hope and joy, such optimism on a perfect spring day,
are buried in snow the next. 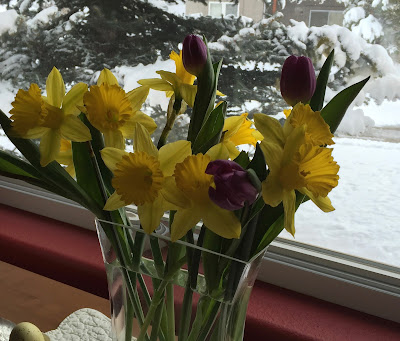 April, no wonder you have the reputation of being the cruelest month.

Spring, you are so capricious.

In those dark dreary days of being shut-up indoors during winter, we believe that when Spring brings forth her flowers, we will only have sunshine and happiness. Our beliefs on how spring should be suddenly become incongruent with our experience when a sunny spring day suddenly turns stormy and snowy. Uplifted, buoyant emotions change like the weather.

Strongholds take root in the mind based on some belief about how we think life should be.
Or maybe, strongholds are based on what we think we should be, or how others should be. Too often we base our beliefs, our emotions, on what we can see, think, or experience.

Can we always take that which we
see,
feel,
think,
believe,
as being true?

I could have faced only to the south and east and stood in the shadow of a building and denied that the sun was shining, the skies were blue, and that winter’s dreariness was giving way to spring.  I could have.

I could have insisted that my truth was informed by what I could see and feel while only looking in one direction.  I could have.

I could have rejected the evidence that a strong wind was stirring those dark foreboding clouds in the southeast and moving them westward towards the sunny skies.  I could have told myself, “I don’t think it will storm.”  I could have thought these thoughts, and I could have believed them.  Thankfully, earlier in the day, I’d heard the truth of these words:

Don’t believe everything you think.

Thinking that is not consistent with the truth will never bring peace.  Just because one thinks something is true doesn’t mean that there is any truth in what that someone is thinking
Spring reminds me of strongholds in the mind.
Strongholds of the mind remind me that there just as spring is capricious, so also are my thoughts and my emotions.

Spring nearly always breaks a part of me.


The breaking comes as I associate both the birth and death of my daughter with spring.  She was born forty-one years ago today on a glorious spring day in April.  I noted in my journal on the day she was born that the daffodils were blooming.

She took her life seven years ago just as spring was nearly over in 2010.

Strongholds in her mind brought on by depression, suicide ideation, and other addictions became too powerful for her to overcome on that day when her life ended.  So many other days and times she had not believed the destructive thoughts about herself and the future, but on that day, the day of her death, her battle with her mind, her body, her emotions, her beliefs, her demons, was lost when she took her life.

On this the day of her birth, I wish to remember all that was Julie.  The spirited joy that she brought to us all is what I remember most. Birthdays are to be celebrated.  As a mother, it breaks me each year as I seek to integrate the joy and sadness that Julie’s birthday evokes in my heart.  I also purpose in my heart and mind that Julie’s life will never be remembered only for the strongholds which ultimately destroyed her.

Julie’s legacy to me is a lesson I hope to pass on to others.
You just cannot always trust what you are feeling.

I’ve learned a lot about strongholds of the mind since that fateful day when my daughter took her life. I’ve also learned how to fight those assailing thoughts which seek to destroy.

After Julie died, a sticky note found on her desk became the message I believe she left for us all.

Live well was its simple message.* 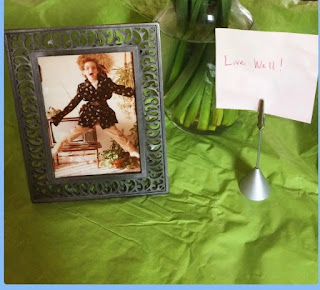 That is the message of her life I hope to remember most.

I wrote in my journal right after her death, that I hoped to integrate her life and death as I progressed through life.  I did not want to live as a person shattered in broken pieces that never were gathered up to make a new a new story for my life which had held so much joy and sunshine but now contained such grief and darkness.  I wished to live well and not give in to any strongholds which could destroy.

Today, the girls, my beautiful daughters have each called and with brave voices asked, “How are you, mom?”  I heard their tears and my throat catches as I say, “I’m ok.”  I know they hear the tears in my voice.  We cry.  We remember.  Amy, says to me, “You have handled this all with grace, Mom.”

If it shows to my daughter, it is because I’ve been given so much grace.
Grace is always a gift.
It is not one I could have conjured up for myself.
It is simply God's gift to me:
Grace for the journey.

Grace has allowed me to take the darkness and the sorrow,
the joy and laughter,
the snow,
the rain,
the wind,
the flowering trees,
the jaunty daffodils
and seek the grace to live out the message Julie left for us all.

*The photo at the bottom of this post, and the photo of Julie's message to us all were taken by my daughter and her sister, Keicha.  You can read a beautiful tribute to her sister here: Julie, Do You Love Me?