Vienna &
A Memorable Evening
I find it very hard to even write about Vienna because the city seemed to impress me at every turn. According to a guide book, Vienna is known for its coffee and croissants. These two things and much of the architecture of Vienna speak of the Turkish influence. The Turks also brought tulip and hyacinth bulbs and lilac bushes to Vienna. Vienna is at its most beautiful in May. We were there during the waning days of April.
Everywhere in Vienna, one finds evidence of baroque architecture and design. Empress Maria Theresa, mother of Marie Antoinette and 15 others, built Schonbrunn Palace soon after she established Vienna as the of capital of the Austrian kingdom. 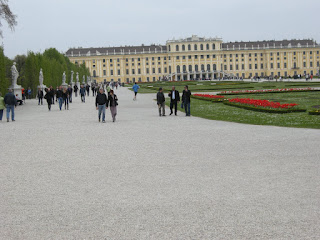 She had a great love for baroque design and Mozart. Her influence is seen everywhere. In the photo below, I am pointing to one mom I really have to admire: Maria Theresa, otherwise known as "Europe's mother-in-law." One of her sons-in-law didn't end up doing so well. I guess that is a lesson in why we shouldn't arrange marriages for our children. 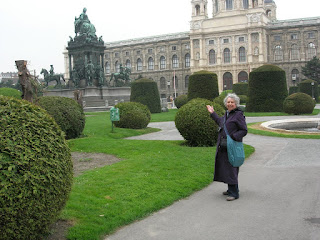 Sally at Maria-Theresien-Plaz
I could not even begin to capture through photography the beauty and uniqueness of Vienna. Schonbrunn Palace is as splendid as anything in Europe. We took a carriage ride through the gardens during which I nearly went crazy from the beauty of spring that was budding all around me. When I discovered I couldn't do the sights around me justice, I just put the camera away and enjoyed the beauty . I have included a photo of Schonbrunn Palace.
It was in Vienna where we went to the Museum of Fine Arts and saw a large collection of the Dutch masters. On our way as we walked to the museum, we passed a statue honoring Goethe.
Once, when I working on my English degree and was reading Goethe, I asked Jim if he had ever read anything by written by the German author. "Yes, in German," my husband replied. I found new respect for him with that statement! It 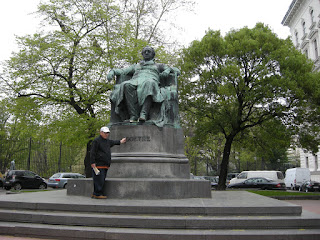 turns out that he read "Faust" in German in college. Jim loved seeing this statue honoring
this famous German author. 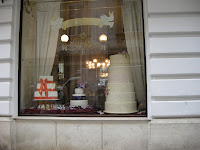 It seems that everywhere you look in Vienna you see something made of marzipan. The cakes in this photo are all made entirely out of marzipan.
Speaking of marzipan, before we left for our trip, Jim's niece told us about Mozart balls. "You can't go to Vienna and not eat a Mozart ball," she said. So, of course, that is one of the first things we bought. These delicious little chocolate balls are made of several layers of different flavors of chocolate surrounding a center of marzipan. 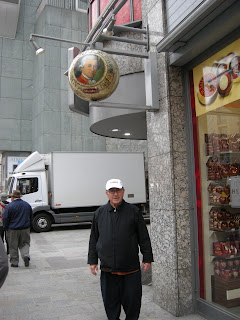 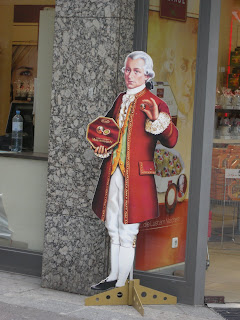 An Evening of Music at Kursalon
Before we went on our trip, Jim asked me if I would be interested in attending a chamber music concert while we were in Vienna. Of course, I was interested. One simply can't go to Vienna, the world music capital, and not attend a concert. On Saturday evening, April 24th, we were able to have a very memorable evening listening to musicians play music by Mozart, Strauss and others at the beautiful Kursalon.
Not feeling well when I got to the concert hall, I made my way down two flights of narrow stairs to the restroom and then back up again . Dying for a glass of water "without gas," I asked the bartender if he might be able to give me a glass of water before I went into the concert hall. Jim and all of our friends were already seated and waiting for the event to begin. Graciously, the bartender gave me a glass of cold water and would not accept any money for it. He invited me to step outside to the terrace for some fresh air to drink the water.
If you look at the link I put in this post for the Kursalon, you will see many beautiful statues of Greek gods on top of this building. It is behind and just below these statues where this terrace was located. I stepped out for the welcomed cool air and walked over to the edge of the terrace where I had a view of the moon. From my vantage spot, I could gaze out at the new spring foliage on the trees and down to the drive below that was filled with concert goers in evening dress. The experience was magical. "Just think," I thought to myself. "Here I am, the only person on this beautiful terrace drinking in the beauty of the spring evening as I look forward to listening to chamber music being played in Vienna, Austria." Refreshed, I stepped into the concert hall and let myself be carried away with the music. The power of the music allowed me to fully live in the moment. Forgetting my worries, my tiredness and other bodily discomforts, under the beautiful chandeliers, seated in the front row on a side section, with my wonderful husband at my side, I was one with the musical beauty of Vienna.
Later, I learned that Kursalon means "a spa or a cure." At one time people came her to drink the curative water and listen to the music. It certainly worked for me. 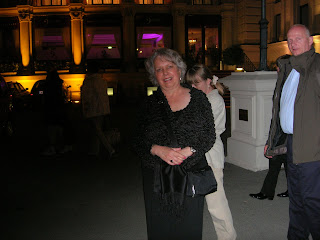 Time Between The Brackets

Jim and Sally's Trip to Europe
Part I
Closely bracketed by days when travel to Europe was either interrupted or not allowed, our departure and arrival flying dates gave us perfect flying weather. It was almost as if the dark cloud that had covered much of Northern Europe lifted at just the right time; thus, we were able to fly from Denver to Frankfurt, and then on to Vienna, on Wednesday, April 21, 2010, with absolutely no problems or interruptions. For nearly three weeks, we did not even think about Eyjafjallajokull. Why should we? Instead, we focused on enjoying our long dreamed of and planned for adventure in Europe. Around May 9th, just as many from our traveling group were planning on returning to the US, we again began to turn our thoughts the skies. Would they be friendly? Would we find a clear path home?
Through email, we began to hear that our friends who were scheduled to depart from Amsterdam on the 10th of May had not been able to fly out as planned. Some were delayed enough to have missed connecting flights. We were upset for them, but grateful that we still had a few more days of travel ahead of us and were not scheduled to fly home until noon on May 15 from Paris.
Again, on the date of our departure, the skies opened up, consequently, allowing us to fly smoothly, and on time from Paris to Dulles and then on to Denver. In my mind, I see our travel dates as days safely ensconced between two brackets of dates typified by dark clouds of menacing ash. Those brackets were dark days, but just inside of the brackets, those days were clear and safe for travel.
I promise I will not bore you all with long details of our trips that are accompanied by many pictures. I do hope to share some of the insights that we gained and new experiences that we found interesting as we left our comfort zone of living a quiet life of retirement and ventured out to cross the Atlantic Ocean to explore six countries of Europe in a time span of 25 days.
Our trip directors shared a great quote with us: "Life is like a book. If you don't travel, you only read the first page." We certainly found that to be true. While my insights and observations may be different from those experienced by others, I hope to at least capture some of my treasured times by writing about them in this blog.
Helen Hunt Jackson wrote about her adventures in Colorado Springs, Colorado, after she moved there in 1876 from Massachusetts. In one of her essays, A Colorado Week, she recounted the splendor and the awe inspiring journey of making her way with a group of people from Colorado Springs, Colorado to Leadville, Colorado. The first day had been quite scary as the horse drawn wagon scaled its way over steep, rocky mountains long before roads had been created to make the journey less treacherous. The difficulty of the journey did not stop the visitors from noticing and commenting on the trees, the flowers, the grasses and the wonders of the various mountains that surrounding them.
Jack, the touch old driver who had once been a stage driver in Mexico said, " There's great difference in folks noticin' things." When asked to explain, he said, "I was a-thinking of the two people I drove up here day before yesterday. I never heard 'em say one word from first to last about the thin' they see' an they wanted to turn right an' come straight down 's soon 's they got up. I don't know what such folk's them takes the trouble to travel round for. I s'pose it's just for the name on't--to say they've done it."
Hopefully, we never become such travelers. We tried to see and do as much as we could. Stay tuned, I hope to share a few stories in later posts.
Posted by Sally Wessely at 4:42 PM 2 comments: