Moving from Mourning to Joy

Committing to the Journey
Pressing On

Commit to the journey, long or short, that leads back to living life.

This sentence found on page 57 of the book, Through a Season of Grief, published by GriefShare may or may not have spoken to me when I first read it.  Placed at the beginning of the book, under the title Healthy Grieving:  Step Five, I am sure that as I read this statement, I assented to it intellectually.  I doubt that I was unable to process it fully emotionally.  I think I must have appreciated reading it because at the time, early in my reading of this wonderful book full of devotions for those in grief, I needed to believe that I would someday be able to go back to living life.  I needed to know that while the grief journey may be long, it would take me to a place of healing, hope, and health.

Along the way on this journey, I have learned some simple truths.  I learned that I must accept that I was on a journey.  As with all journeys in life, I had to accept that I would not know what lay ahead of me as I made my way down the path of recovery after a terrible loss.  I did not know the hills I would face, nor would I know how difficult the valleys could be.  Thankfully, long ago in my life, I had come to believe that life is best lived one day at a time.  I did not know that on this grief journey that I suddenly found myself on, I would at times only be able to live moment to moment.

How does one press on with such a journey the newly bereaved may ask?  I only can answer this question by thinking about my own journey and noting those things that have most helped me press on.

The Need to Memorialize a Life

In my first journal entry after my daughter's death, I wrote about a beautiful wreath that had been sent by her employers.  I wrote how the color choices gave me such comfort because they were beautiful and bright, just like Julie.  Orange roses were in the arrangement.  I wrote, What could be a better choice for Julie?  The orange roses were surrounded by red gerbera daises with yellow lilies to balance the reds and oranges.  I also wrote, I've tried to make sense of why the hints of Amy's wedding bouquet in this arrangement seem oddly sensible, appropriate, and right in the irony of being selected as a floral tribute to Julie at her death.  The wild profusion of asparagus fern and the several shades of purple delphiniums intertwined with a touch of ivy seem so right in the ability to comfort me because Julie and Amy are so intertwined, so bonded, so close, why wouldn't I link these flowers with both of them for the rest of my life?

I then went on to write how Jon, my youngest son, would be coming to my home in a few days to begin work on the Julie Christiansen Memorial Garden he wanted to build.  I began plans for the flowers I wanted in the garden.  I also spoke of wanting some sort of structure.  I wrote, I will bring beauty out of this loss.

More than needing to plant a garden, I now know that I needed to memorialize my daughter's life.  I want her remembered as a beautiful, bright, vibrant, loving, funny, gifted individual because that summarizes the essence of Julie to me.  She would want me to remember her alive.  She would not want me to stop living because of her death.

In small ways, I try to memorialize her life.  I did begin the garden.  Jon did most of the work on getting it started by building a small patio.  We planted a tree, a Newport plum because it blooms near the date of both her birth and her death.  The purple leaves remind me of her.  I hoped that the garden would have a sense of permanence to it.  I hoped it would be healing to my children and grandchildren as they visited my home.

In May, I purchased a kinetic wind sculpture for Julie's garden.  It arrived on July 5, just in time for Jonathan to erect it while he was home for a short visit from his home in Boston.  On July 6, he and his wife Samantha, who has helped Jon with so many projects that he has completed in beautifying my yard, and their son Atticus visited and erected the wind sculpture that I bought as a memorial to Julie.  We may be leaving the garden behind, but the sculpture can go with us. 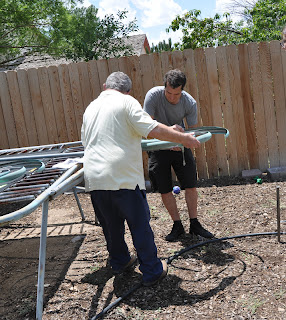 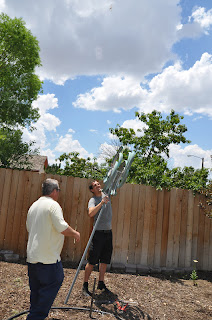 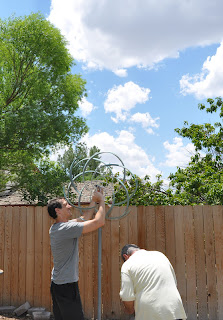 We took a few minutes to reflect and visit on the patio that Jon built.

As this photo indicates, we have had a long, hot, dry summer in our area.  Not only did I choose not to plant the garden because we are trying to sell the house, but those flowers that were planted are struggling to survive no matter how much water I give them.  The beds in front of the garden were filled with annuals that I placed out early.  They promptly died due to heat and bugs.  I have never had a hard time growing a lush annual bed in this area.    The clematis is usually full of blossoms this time of year, and the delphiniums that now struggle to live are usually blooming in late June and early July.  It has been a rough year for flowers in Southern Colorado.

This also could be a metaphor for the grief journey.  At times, the journey is dry and does not produce much beauty.  During these times, one must hang on to hope.  I have no doubt that those flowers that bloomed in beauty last year, will do so again with the right conditions.

There are few things in this life that bring me greater joy than my children and grandchildren.  My life is dedicated to the four children I have who remain and to the seven grandchildren that I have.  They are what motivate me to keep on living life as fully as I can.  I do not want to be stuck in grief.  I do not want to miss out on watching them grow and enjoy life.  I want to see all of us heal and live lives full of meaning and joy.  That is one of the great motivators along the grief journey.

Three days after Julie died, we lost our beloved Buster.  I could not even believe it when we suddenly had to put down our dear golden retriever just days after losing a child.  Last fall, we got Boston, our new golden retriever pup.  Atticus had never met Boston before.  The day we erected the wind structure was the first day that the two of them were able to play and bond.  Atticus immediately went to work trying to train Boston.  This is no easy feat.  Boston responded with great obedience.  I think he really wanted to make sure he could count on Atticus to be his great buddy.  I was actually quite amazed at how well Boston, our problem child who has challenged us so greatly in his training, took to Atticus and immediately began to follow his commands.


I think these two will be great friends over the years.

I've read in some of the grief books that one should get a pet after the loss of a loved one.  I think this is good advice.  I know that as I look at this beautiful photo of my youngest grandchild and our new pup, I feel great joy.  Moments such as these are what I call spots of grace.  I am flooded with peace at such times.  The soul learns to rejoice and give thanks for such a grace that has allowed me to heal and again live with a heart full of joy.