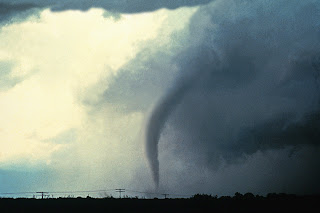 Lately, I've been feeling like I have been living in Tornado Alley.  Thankfully, I'm not really living in such a place.  I'm just experiencing storms in my life that seem to feel like tornadoes.  In other words, I've felt as if I, and others I love,  keep getting picked up off the ground, spun around, tossed about, and deposited in a spot that is different from where we were before or where we wish to be.

Actually, I have experienced one real live tornado within the past few weeks.  Perhaps that is where I came up with the analogy for my life of late.  My husband and I decided to get out of town on a Sunday afternoon by heading up to a favorite spot in the mountains near our home.  We envisioned a nice dinner and a walk around the lake.  As we made our way down the highway, the wind started to blow.  The wind always blows in Southern Colorado, so that didn't seem to be a big problem.  Then the wind picked up.  Soon, a large "dust devil" was heading toward the highway.  It crossed the highway as we drove through it.  "I can barely keep the car on the road.  We are in a tornado" my husband said.  I responded with, "Oh, it is just a dirt devil.  It isn't a tornado."  "It felt like a tornado to me," he said.

Sure enough, he was right.  That night on the news we saw a report that three small tornadoes, called down spouts had been spotted in the exact spot where we had been at the same time we had been there.  In fact, someone had a video of the tornadoes they sent to the news station.  I said, "That looks like our car driving through that thing."  He said, "I told you it was a tornado."  Of course the video and news story caused me to feel that perhaps I should not have dismissed the funnel that we saw and called it a little dirt devil.

Small storms can pack a lot of power.  They can catch you off guard.  When they strike, they are not selective in the damage they may cause.  My husband said it was very scary to feel as if the car was going to be lifted off the road and have no power to stop what was happening.

We had our small and large storms this summer as a family.  We are getting tossed about pretty heavily.  These storms are not ones I can share at the moment, but we are ready for them to end.  I'm ready for  outside forces to stop the willful blowing of storms that catch others up in the fall-out of their pernicious behaviors.  It is time for all of us to have some smooth sailing.
Posted by Sally Wessely at 3:22 PM 36 comments: