Today is Rare Disease Day.  After years of seeing multiple doctors for strange and confusing symptoms, I was diagnosed with a rare disease in 2013. I have an autoimmune disease called Cicatricial Alopecia.  It is a scarring alopecia which in my case has presented as Frontal Fibrosing Alopecia.  This disease brings both physical and emotional pain.  When hair dies, it hurts.  There is itching, burning, and a sense that the scalp is crawling.  Emotionally, it hurts to lose one’s hair because as women, our identity is often tied to our hair.  Some of you have read my story before.  Others have not.  Here is my story.

The completely innocuous beginning of my journey into hair loss cannot be pinpointed. There were early signposts. Inoffensive and unobjectionable, they were not noted. One day, I did notice I no longer had hair on my arms. It certainly didn’t seem like a big deal. Then, I noticed I didn’t have hair on my legs. I surmised the loss of hair on my limbs was a natural part of aging.
Next, as I innocently proceeded on a journey I didn’t know I was on, I noticed that I had a small red inflamed spot on the left side of my front hair line. It didn’t itch. It just looked odd. The spot spread, and it looked as if pustules were forming. I tried several home remedies for treating the area. Then, I noticed that hair would fall out when these strange looking spots healed.
On April 6, 2006, I consulted a dermatologist. I somewhat sheepishly told him about the home remedy I had been using: Listerine. Seriously, I applied Listerine to these inflamed areas of my scalp! I did this because I had concluded that putting an antiseptic on the weird looking sores would be better than doing nothing at all. I think the doctor thought I was a nut job. I can forgive him for that. I’m sure he hadn’t seen anyone else that day using Listerine to treat skin problems. He asked me if I had tried Windex. Funny. 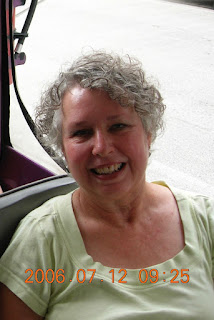 The doctor said he didn’t know what the problem on my scalp was because he’d never seen it before. He thought it might be psoriasis. I have a history of psoriasis. I didn’t think it presented like psoriasis. He didn’t disagree with me. He concluded that he didn’t know what else those sores could be. He gave me a prescription for a topical and sent me on my way. He never suggested that I schedule a follow-up to see if my problem was resolved by using the treatment he prescribed. I felt dismissed but also felt that my symptoms did not merit a legitimate medical concern.
The topical cleared up the worst of the inflammation. This made me happy. I did notice the hair continued to fall out when the area was healed, and that it did not regrow where the pustules had been. My hair continued to thin. I fretted, but again I surmised it was a part of the aging process. I noticed the front part of my hairline did not have the volume that it once had, and I found my old hairstyle no longer worked with the thinner frontal hair.

In May of 2010, my youngest daughter died unexpectedly. Just months after her death, my hair fell out enough that fine strands of silver hair covered my clothing. I called it tinsel and joked, “The tinsel is falling off the old tree.” According to my doctors, the loss was temporary and caused by shock and stress. “Your hair will come back,” they said. The hair loss was significant, but not noticeable to others.
One morning in July of 2011, as I was putting on my makeup, I noticed my eyebrows were completely gone. They’d been there the day before. Now, the loss of hair I had been experiencing for the last five years seemed anything but innocuous. I saw my doctor and told her about continued thinning of hair and sudden loss of eyebrows. She asked, “Have you been plucking them?” It was a legitimate question. Perhaps, she thought my stress had manifested itself with trichotillomania, a hair-pulling disorder. I decided it was time to visit a new dermatologist.
A compassionate and supportive doctor, she was also a friend. She thought I had a form of alopecia triggered by stress. She’d never seen alopecia that presented like the symptoms she saw on my scalp. The sudden loss of eyebrows was a mystery to her. She thought we should take a wait and see approach. I went home from the appointment and consulted Dr. Google. Alopecia, a word I couldn’t even pronounce, was not new to me. I’d heard it before, but it was a word I could never remember. I wrote this term down on a yellow sticky note and placed it by my computer. I practiced saying it. I didn’t want to forget the name of the condition nor how to pronounce it. Believe me, since that day, there has been no forgetting!
Not long after that appointment, I saw my endocrinologist for a routine appointment and asked her for an opinion. She said that my thyroid was not causing my hair loss but concurred that stress could have triggered problem. She advised me to get the scalp biopsied. Heaven only knows why it took me a year to get a scalp biopsy. I was in denial about my hair loss. I believed it was temporary. I believed the loss would stop. I believed my hair would grow back.
Meanwhile, my hair continued to fall out. Finally, in March of 2013, a full seven years after my first visit to a dermatologist for hair loss, I saw another dermatologist. After his initial examination of my scalp, he diagnosed me with frontal fibrosing alopecia. He added that he would have to biopsy my scalp for a solid diagnosis. I had never heard of FFA before. The biopsy came back confirming FFA and lichen planopilaris.
He sat me down and painted a grim future for me and my hair. He showed me pictures he had downloaded from the internet. All I could think of was, “Surely this won’t happen to me.” The new doctor said that there was really no treatment to cure the condition. He said that the treatments that might slow it down were not effective and had side effects I may not wish to experience. I chose not to take the oral medications but used the topical Clobetasol prescribed to help with the itching, pain, and soreness.
In 2013 when I was finally diagnosed with FFA, I realized that I had suffered from terrible itching on my scalp for several years. Dealing with loss and grief, health problems of another nature, I did not pay much attention to what was going on with my scalp. I had lamented my thinning hair, but I still believed it was a temporary situation. The trajectory of my journey changed the day I learned about the disease that was not only taking my hair, but also leaving scars behind. I had to determine out a way to accept and cope with the diagnosis and the changes it brought to my journey through life.

The devastating emotional and psychological components of hair loss are not often addressed by the medical profession. My own personal journey with hair loss has been made easier by the support and knowledge I have gained from the Cicatricial Alopecia Research Foundation and from www. AlopeciaWorld.com.
In June of 2016, I attended the 7th International Patient-Doctor Conference sponsored by CARF in New Orleans, Louisiana. It was probably one of the most important things I have done for myself since I began this journey. There, I learned I was not alone. I met some of the most amazing, supportive, and smart men and women I have ever known. Like me, they too are learning to live with scarring alopecia. At the conference, we armed ourselves with information to help fight the battle against hair loss. We learned from those doctors whom have dedicated themselves in helping us on this journey.

United, we are joining the battle to win the war on scarring alopecia. Our stories give strength to each other as we journey down this road together. Our stories unite us and make us feel less alone. Our stories validate our experience. At times I think we all feel very alone in a world where it seems every head around us is covered with hair. I hope my story helps someone else feel less alone.