Our Getaway - Part One

Summer is rolling on by with great speed it seems.  One often hears, "It's the 4th of July which means the summer is half over."  Towards the end of June, a decision had been made by my husband that was supported by me to go ahead and have major back surgery on July 18.  I had resisted making this decision  because I felt that we had not really had a very fun filled summer.  I have been ill for most of the early part of summer, and Jim has been struggling with back pain, so no matter how much I wanted a carefree summer, it just looked as if this year was not going to be the year where that was going to happen.  I especially wanted a carefree summer after spending last summer trying to sell a house and find a new home in which to live.

Looking back on the past year, I see stress added to stress in our lives.  We sold a house and bought a new one.  We moved from one town to another.  Jim had surgery on his parathyroid.  I have had health problems and been hospitalized.  There have been family stresses and great concerns.  No one could deny that we needed a vacation from life, but a long vacation just was not going to happen this year.  So, we went on a short getaway.  That was a good thing and probably the best thing to do also.  Sometimes long vacations can be stressful.  Short ones can be just right.

We started our mini-vacation on Saturday the 29th of June.  We drove the six or so hours to Grand Junction, Colorado to visit my mom.  It had been nearly a year since we had been over to see her.  That is way too long of a time to go between visits when one's mother is 97 years old.


Yep, this woman that is standing next to me is my 97 year old mother. Have you seen those commercials that ask, "Who is the oldest person you know?"  My answer is: my mother.  Amazingly, she still is able to care for herself, is very healthy, and has the same personality, humor, and awareness of the world around her she has always had.  Last year, she again only saw her doctor once for her yearly exam.  I'm not so sure I got her genes!

When she saw the above photo on facebook, she said she wished I would have let her get her makeup on before I had the photo taken so her age spots wouldn't show.  And, yes, in case you are wondering, she is on facebook.

It is hard to have her live so far away from all of us.  It is especially hard for my siblings and me as we get older to make that drive over the mountains of Colorado during the winter.  Thankfully, she has a good support system in place where she is.  Truly, I believe that aging in place the best kind of scenario for folks as they grow older.  I am grateful that so far, my mother has been able to have this experience.

On the morning of July 3rd, my husband I left my mother's to drive to our vacation getaway spot in Glenwood Springs, Colorado.  Glenwood is a favorite destination spot for the two of us, and we frequently extend a visit to my mother's by spend a night or two in Glenwood.  Probably the most famous attraction in Glenwood is the huge hot springs pool there.  With the aches and pains that Jim was feeling in his back, it was an easy sell to convince him that we needed to spend a few days soaking in the hot springs. 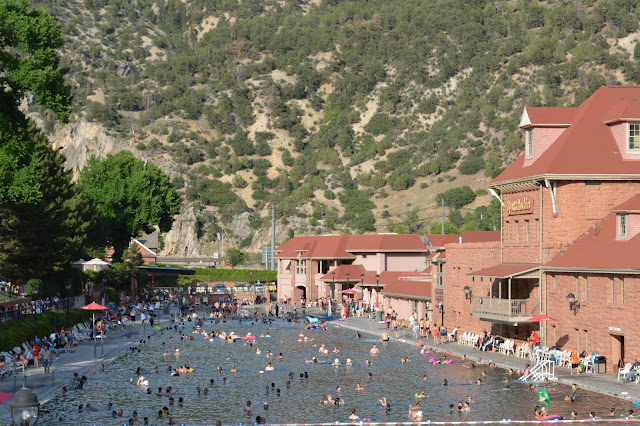 I knew the 4th of July weekend would mean that we would not have an easy time finding a room for the holiday weekend since we had not booked months in advance.  Also, we had our dog with us, so that meant a room was even harder to find.  We tried all our favorite places, but they were either booked, or they would not allow pets.  We then found a reasonably priced room for the 3rd and 4th and booked it before we left on our trip.  When we got to the place, as sometimes happens, we just could not see ourselves staying there and being comfortable and happy.  So, we started driving around to see if we could get into another place.  We decided if we couldn't, we would drive the four or five hours it would take us to get home.  That is how much we did not like the place!

One of our favorite place recommended another place up the road from them.  It was the Starlight Inn.  (Click on the link to see the place.  I recommend it if you are ever in Glenwood.) They called ahead for us and told us a room was available.  We took it.  Actually, we really liked this place and will stay here again.  Our room was small, but it was clean, comfortable, and worked well for us.  Boston was happy.  We were happy.  The host was so friendly and accommodating.  We could walk to breakfast every morning to a great German restaurant.  We could walk to the pool.  We could walk downtown.  And, there was a great little neighborhood behind the Inn that worked well for walking the dog.

I love Glenwood.  I love the historical old buildings and all the history of this place.  I've never stayed at the Hotel Colorado, but supposedly it is haunted.  My son and his family spent New Year's Eve there one year and watched the fireworks from an upper window while the kids speculated on whether or not they would see the ghosts.
As I walked down to take these photos, I excused myself because I was standing in the path of a woman walking by.  She said, "Oh it is so nice to see someone with a camera.  I have only seen phones snapping photos during my trip."

As I said, I love Glenwood.  I love it in the summer and the winter.  We once spent New Year's Eve here and watched the fireworks on the mountain while we sat in the hot springs with snow flakes falling on your faces.  It was great fun.  This year, we had hoped to watch the fireworks from the pool on the 4th of July.  Unfortunately, that was not to be.  Fireworks were banned due to fire danger.  This was a wise and prudent decision.

There are actually two pools on this site.  The one pool is smaller and much warmer.  One can sprawl on the steps and soak away aches and pains in this warm, healing mineral water.  I find I can no longer tolerate walking in this smaller, warmer pool.  It is just too warm for me.  Jim loves it though.  I sit on the steps soaking and watching the people while he walks in the water.  We generally go to the pool in the evening when it is cooler outside because the hot water and sun combination no longer works for us.

When we tire of the small pool, and wish to cool off, we walk over to the larger, deeper pool and walk or float in the water. The water in this pool is also warm and comfortable even in the winter, but cooler than the other pool.   I was feeling a bit playful while we were there and surprised Jim's by hopping up onto his back so he could carry me through the water.  It is amazing how we can do such things in the water.  It would be a disaster for both of us if I jumped on his back on dry land!  He said I didn't weigh anything.  He is such a nice guy.

As Jim and I spent time in the larger pool, I recalled that the first time I swam in this pool was during our senior trip when I was a senior in high school fifty years ago this year.  I reminisced about the trip as we walked up to where the section was where people were swimming and diving off the diving board.  I remembered that I had a new swim cap that had flowers on it.  Do you remember those?  They were so uncomfortable!  Back in those days, we were not allowed to swim in the pool in Glenwood without wearing a cap.  Two piece bathing suits were not allowed either.

While we were on our senior trip many years ago, we ate lunch at the Hotel Denver which can be seen in the photo below located behind the old Denver and Rio Grande Depot.  The Denver and Rio Grande Depot itself also holds many memories for me.  I have traveled through by this depot by train at different times throughout my younger years.  My father, former Superintendent for the Denver and Rio Grande Railroad for the Western Slope, purchased the antique oak desk that was used by the station master of this depot when the railroad sold the building.  The desk is now in my mother's home.  It is a magnificent piece of furniture of historical significance.  Unfortunately, I have never photographed it.  I will have to do so on my next trip home.

We spent two nights in Glenwood.  Both evenings we spent several hours in the hot springs.  We slept very well on those nights.  Glenwood Springs again rewarded us with a relaxing and memorable getaway.