On Seventy ~ Reflections on Becoming a Septuagenarian

Last year about this time, a dear friend and I met to write.  We spoke of our upcoming seventieth birthdays.  We thought we should take the year to reflect on the milestone event that would soon be upon us.  What lessons would we learn as we approached the eighth decade of our lives?  What, if anything, could we learn about life before we became septuagenarians?

Having read many of May Sarton's journals over the years, I went in search of her book At Seventy: A Journal.  I knew I had read it before, but found I had gotten rid of it when we moved.  So, off to the library I went to find it for a re-reading.  Interestingly, I found little insight in this particular journal.  She did determine that during her seventieth year, she would journal for one entire year.  I thought I might try to do better than that.  I toyed with the idea of writing fifteen minutes a day for one year.

We are now twenty-one days since my seventieth birthday.  Needless to say, I have not written everyday.  I have however had some reflections on reaching this milestone in life.

In At Seventy: A Journal,Sarton wrote,
How is seventy different from sixty-five?  I don't see much difference, except that time accelerates.  The days go past with frightening rapidity, and so do the years.  It is plain that I am not ready for old age!  But then time does not stand still for old age I fear.  On the contrary, from all reports, it simply flies away, and that is what I am beginning to notice.

Did her words ring true?
Is seventy different than sixty-five?
I thought I might take a look back.
What was my sixtieth birthday like?
Wow, talk about time accelerating.
My grandchildren were not teenagers when I was sixty.
Time simply flies away...
Mason was six and Hannah and Atticus were two.
I could hold the two younger ones in my arms.  Now they are all taller than I am.
I ventured up on the trampoline the day I turned sixty, just to see if I could still jump.
I could.
It is plain that I am not ready for old age!
I was excited to turn sixty-five.
Having officially retired at age sixty-one, I was still working until sixty-five for insurance benefits.
At sixty-five, my medicare coverage kicked in and I was thrilled.
I felt good.
I was healthy.
True retirement was something I was looking forward to with great anticipation.
I had much I wanted to accomplish.
On the day of my sixty-fifth birthday, my high school girl friends gathered at my home.
It was a planned gathering that happened to occur on my birthday.
Here are some photos from that day.

One cannot reflect upon reaching the eighth decade of life without remembering that dear ones have been lost along the way.
On that day of my sixty-fifth birthday, we could not know that
before the year was out, my girlfriends and I would lose Judy, our dearly loved classmate.
She had been fighting cancer, but she was well and looked so good that day.
In the photos above, she is sitting in the place of honor, the gold chair.
Sadly, she did not reach the milestone the rest of reach this year of becoming
septuagenarians.

I also lost my dear daughter during my sixty-fith year.
She died three months after my birthday.
For half a decade, I have learned the meaning of bereavement.

At seventy, I am much different than I was at sixty-five.

I have achieved my seventy years in the usual way, by sticking strictly to a scheme of life which would kill anybody else....I will offer here, as a sound maxim, this: That we can't reach old age by another man's road.
Mark Twain

My life was pretty simple in many ways until I hit sixty-five.
It was filled with some sorrow and disappointments, but mostly, I was quite pleased with the path my life had taken.
My children were grown and it seemed they had launched successfully.
I had just retired from a profession for which I still held great passion.
I thought I would continue to teach some, write some, travel some, and garden a lot.
Grief took away many of those plans.
In the past five years, I think I have come to think more deeply about what is most important in my life.
Also, I refuse to believe that just because I am seventy, I am old.

I prefer the following quote over Mark Twain's.

The first forty years of our life give the text, the next thirty furnish the commentary upon it, which enables us rightly to understand the true meaning and connection of the text with its moral and its beauties.
Schopenhauer

The commentary on my first forty years won't be recorded here.
(Let out a sigh of relief for that!)

At forty, would I ever believe I would be where I am today?
No, never in my wildest dreams would I have known what was in my future.
That is a good thing.
Along with the loss that I have suffered, I've know great joy.
I have been richly blessed.

As I reach seventy, I've learned I have treasures I always longed for when I was younger.

Today, I will touch on several treasures that only get better with age.

The Treasure of Friendship

There is great beauty in sharing the lives of those I knew before I knew much about life.
I made wonderful friends when I was a young, very naive teenager.
Now, the great gift of life is that I get to enter the eighth decade of my life with these dear women.
They gathered at my home last weekend. 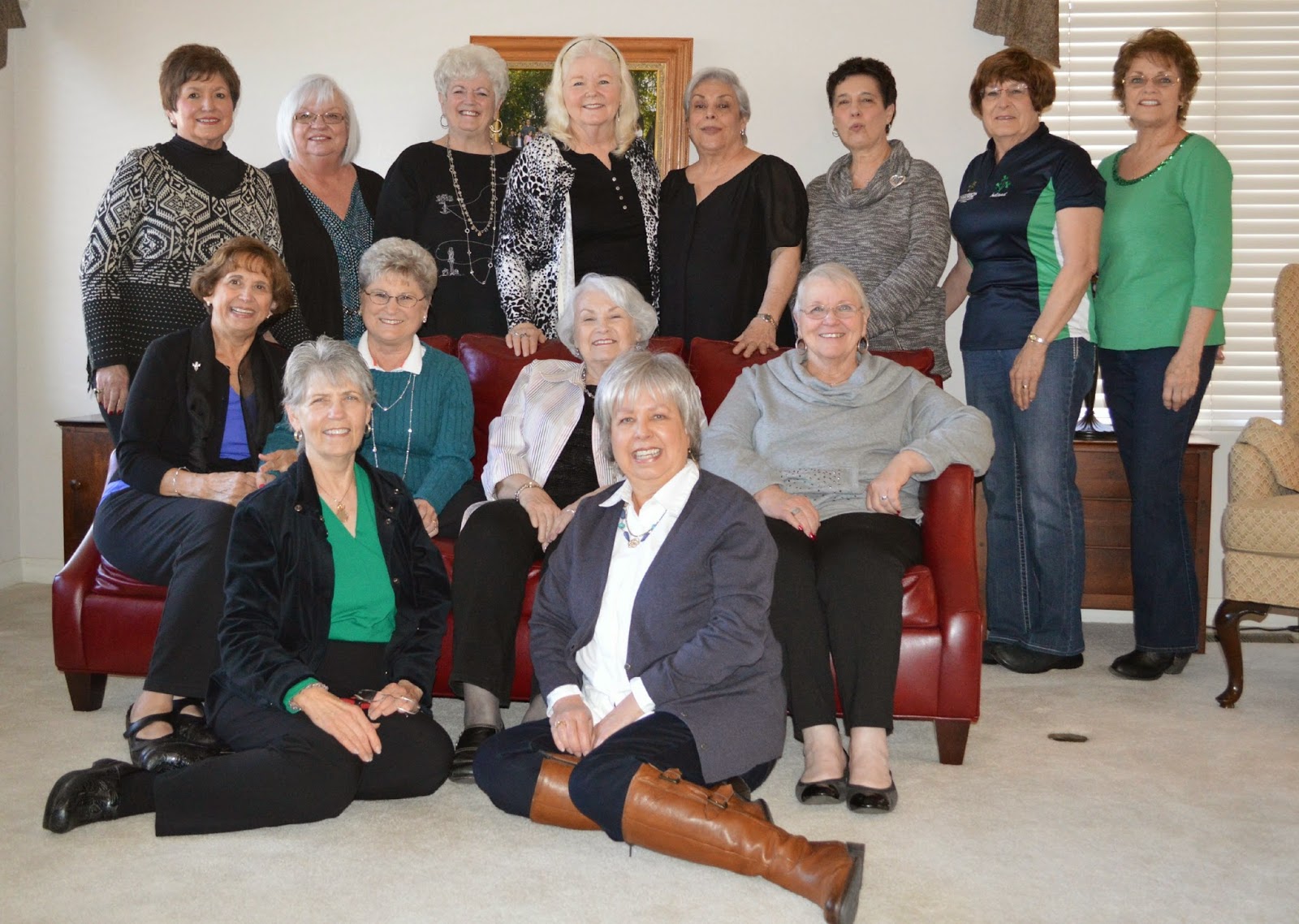 Every time we get together, we hug on each other like long lost friends.
We laugh.
We share our stories.
We poke fun.
We encourage.
We know what we have is precious and rare.
We celebrate each other and the group.

This time we had several with us whom either have never joined us before, or live far away.
We have 50 years to catch up on with these few. 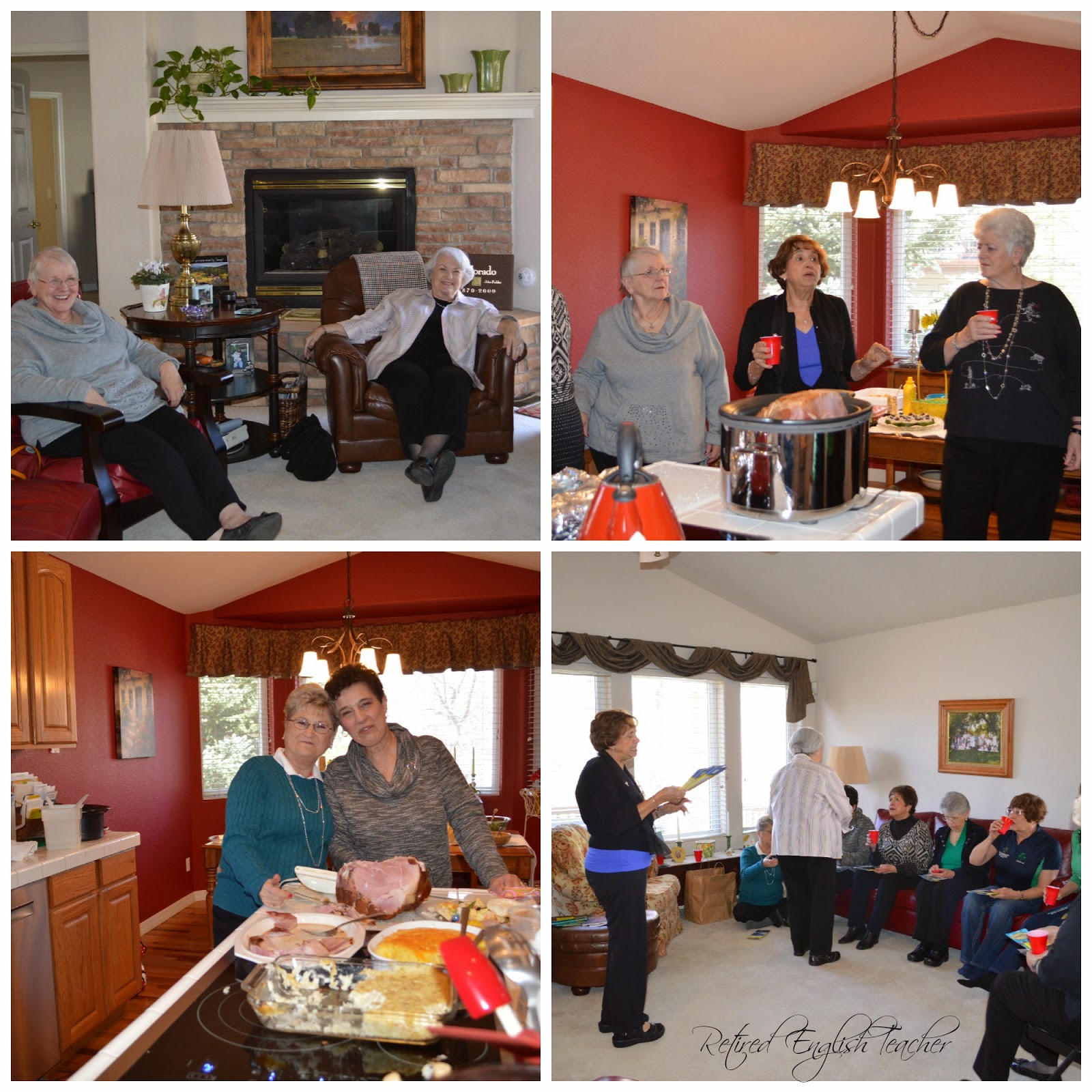 Kathy and Elaine, seen over the ham I cooked,
came early to sweep my doorway,
set up tables,
keep me calm and focused,
and show me they are there to remember what I forgot.
We held a planning meeting so we could plan our big
Seventieth Birthday Party
that will be held in September.
We will go to Glenwood Springs, Colorado for three days of celebration.
I call our trip that we are planning
Our Senior Trip.
The ladies heard of room rates, things to do, and dinner plans as we held our
Senior Meeting
in my living room.
Did I hear someone is bringing a case of white wine?
Someone else is bringing a case of red wine?
Goodness.
Watch out.
The true golden girls are getting ready to celebrate. 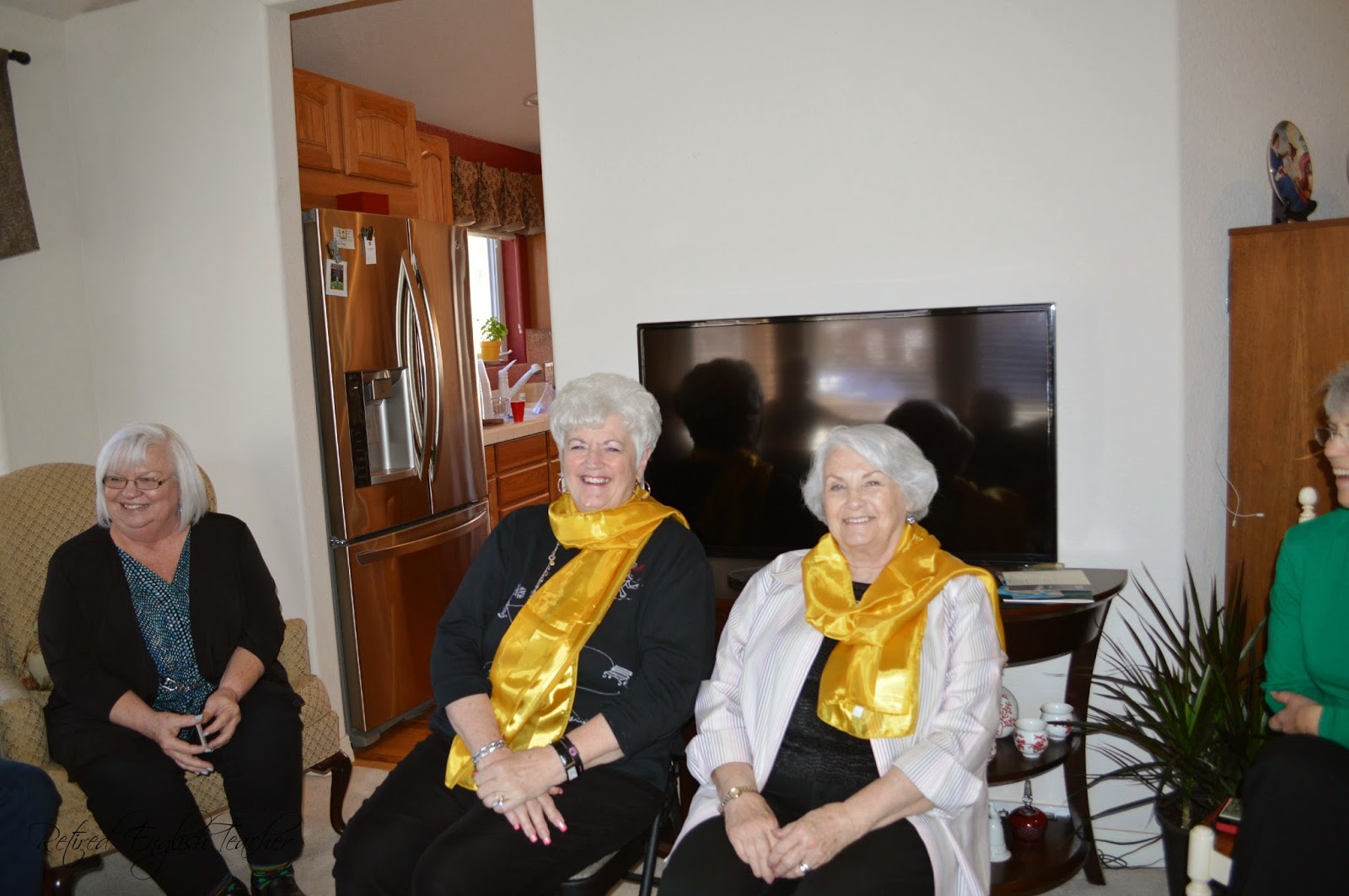 The Treasure of a Loving Husband

When my milestone birthday was drawing near, I knew I wanted to celebrate it in a special way.
I didn't want a party.
Who wants to clean the house?
My birthday falls on February 28, so it is not a good time for the children to come from out of state.
They have jobs and kids that keep them busy in February.
The weather is unpredictable.
Instead of a party, we decided we would go to Florida to celebrate my birthday.

I've known my husband as long as I've known the girlfriends whom I just wrote about.
Just like the laughter and the memories that I share with them, I share such wonderful memories of days gone by with my husband.
He has been that one that has always been there for me.
Even when I was a young woman, I knew the young man I first dated fifty-four years ago this week would make me laugh.
I knew he would always show me respect.
I knew he was one I could easily honor and respect.
I knew he would be a gentle, kind, understanding companion.
I knew he would give me a good life.
I just didn't marry this dear man until I was forty-seven years old.
Sometimes, youth makes one stupid.
Sometimes we get wiser with age.
At least, this man, the one I love, and I got together in the end.

Never would I have believed back in those days that at 70 Jim would be at my side.
Never in my wildest dreams did I believe that.
Thankfully, he is here with me.
At sixty-five, when my life turned upside down, he was there. 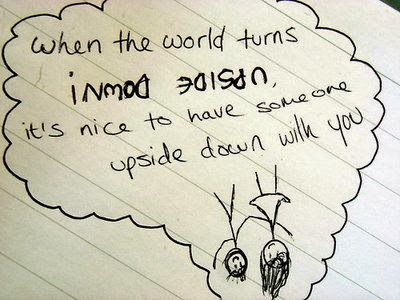 At seventy, we acted like a couple of kids at Disney's Magic Kingdom.
We walked around wide eyed and forgot that our bodies were aging.
We laughed ourselves silly on rides that we maybe shouldn't have ridden.
Thankfully, neither of us had a heart attack.
Jim took a selfie of us just before we went for one of those crazy rides. 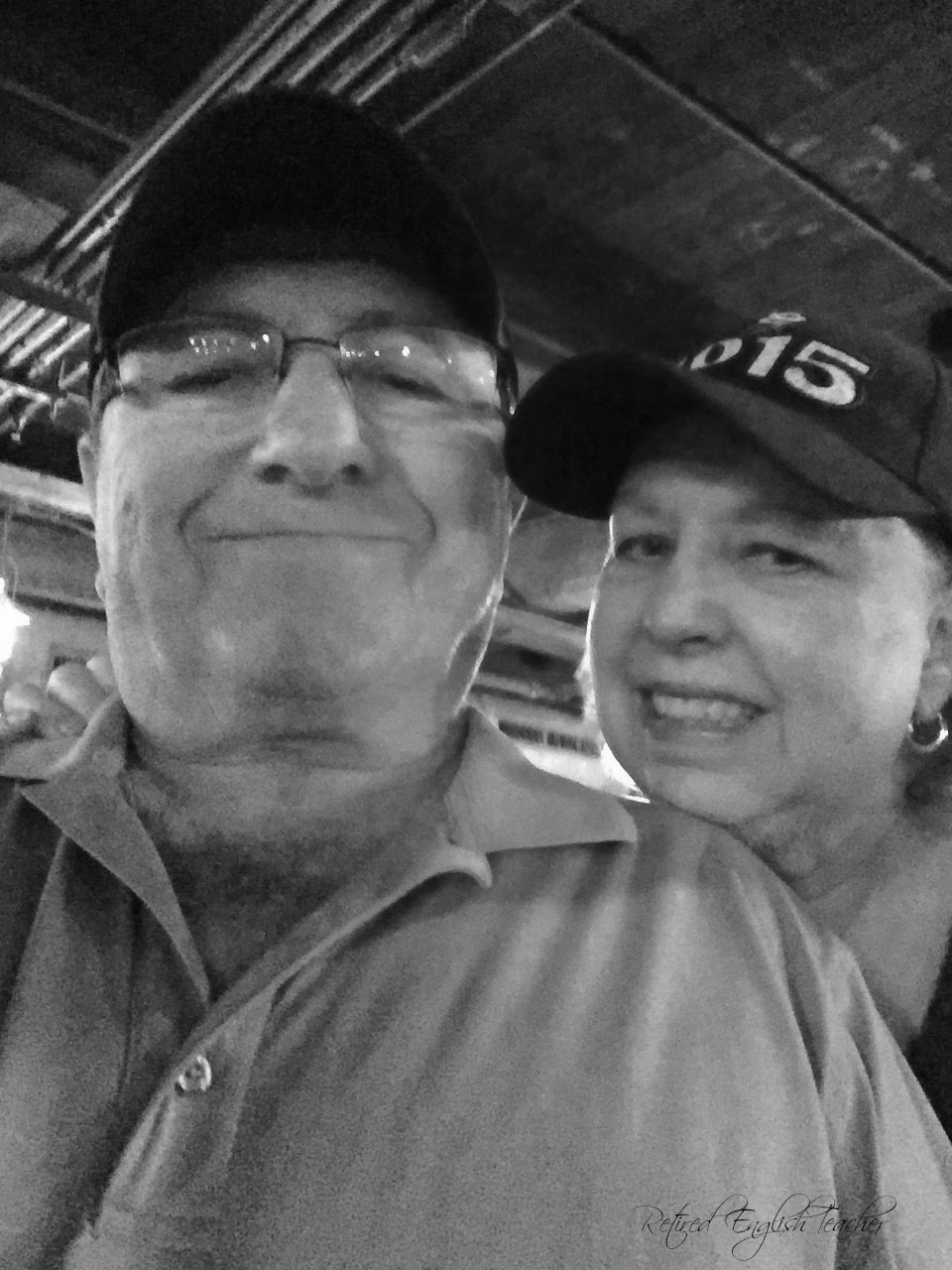 On Valentine's Day, two weeks before I turned seventy, my love and I walked on Daytona Beach.
Now here's something to celebrate:
We both are septuagenarians,
but we still love to have those romantic moments on the beach.

We met as teenagers, and we get to enter the last years of our lives together.
Life doesn't get any better than this.
I'm learning this at seventy:

The older the fiddle, the sweeter the tune.
Irish Saying