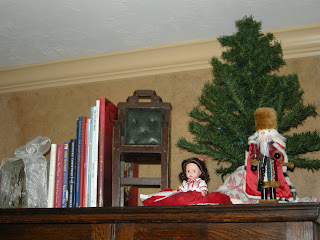 The chair in this photo, part of an entire suite of furniture that included four chairs, a round drop leaf table, a bed and a chest of drawers , was made by my grandfather, Albert Townsley, for my mother when she was a child. As I recall, she was five years old when her father made this gift for her. A doll, with beautiful clothes made by my grandmother, was included in the gift. The furniture which would have been made around 1921 remains and is now taken care of by Keicha. The gift that my grandparents made illustrate the artistic, creative and productive traits that Albert and Lulu possessed. They had just lost their home and all of their possessions in a fire just before they created this homemade and much treasured gift for my mother, their only child who had been born quite late in their lives. She passed down the this treasure to me when I was child, and I remember many happy hours spent playing with the doll furniture and my dolls. I was thrilled to see one of the chairs in its place of honor in Keicha's house.
We made new memories and had a great time this year at Christmas. Christmas morning was spent in Keicha's lovely home opening presents with Gillian, Keicha and Gillian's dad Jeff. 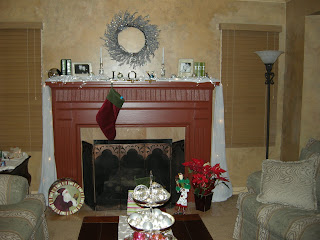 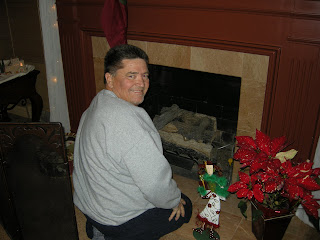 Here is an example of Keicha's lovely decorating. Her mantle was beautiful. Jeff set a cozy mood for us by lighting a fire in the fireplace. We then began to open presents, but not until we got a picture of Miss Gills in front of the tree. We had such a wonderful time together. It was good to spend some time with Jeff and to know that these parents are working very hard to co-parent their wonderful daughter who also happens to be my granddaughter. I loved the picture I got of Gillian and Jeff snuggled up together after Gillian put on her new robe. New memories were made by all of us that will be treasured as tim 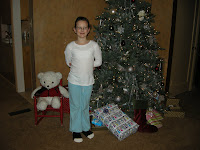 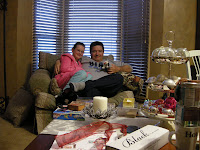 Christmas Afternoon - Ryan & Stephanie's House
It snowed in Ogden on Christmas Eve, and it kept snowing throughout the day on Christmas Day. "I'm Dreaming of a White Christmas" is an appropriate song in Utah. The driving from Keicha's house out to Ryan's was a bit tricky for Jim and me. We don't get that much snow in Pueblo. We just took it slow, too slow for Keicha who was being driven to Ryan's by Jeff and followed us, but we made it safe and sound. Hey, we're old folks - we take it slow. Even though this isn't the best picture in the world, you can see the view of the snow through the entry way of Ryan's house. 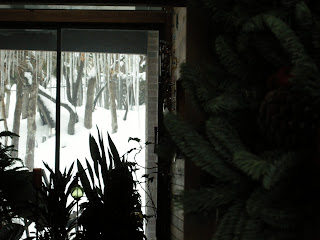 Ryan's house was already a beehive of activity when we arrived. Stephanie's dad and her step-mom were there, as was my kid's dad, Barry and his wife Kay. A wonderful brunch prepared by Ryan and Steph was on the table. Brunch on Christmas is a tradition I started when the kids were little. I never wanted to spend the day in the kitchen producing some big meal. We like late morning brunch with plenty of possibilities for snacking throughout the day instead. I had purchased an Santa apron for Ryan - also known as Ry-hop - to wear when h 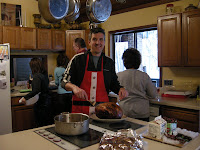 e makes his Christmas brunches. He loved it. Here he is getting ready to slice the ham. We had a great time at Ryan's. The kids played with the pogo stick that Regan got - the kids included Ryan and Keicha who showed that they could still balance and jump at the same time. That pogo stick is a good workout, but the kids wouldn't let me try it out! 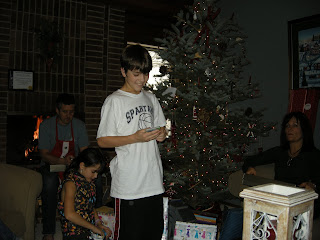 When Grandma arrived, that meant that there was another round of present opening. Here Parker is looking at the new textapedia that I gave him; it is exactly like the one I gave Jim. I thought a middle school principal and 7th grader both could use a guide to texting. Below is a nice picture of Ryan and Stephanie in their lovely home. They always are the subject of such cute pictures of the two of them together. The tree, which was cleverly decorated with a ski theme was charming as was the entire house. We had so much fun together, but we really missed the rest of our family too. If only all of us could have been together, it would have be perfect. Ok, it would have been crazy with all my wild kids on one place! I still wish we could have been together. 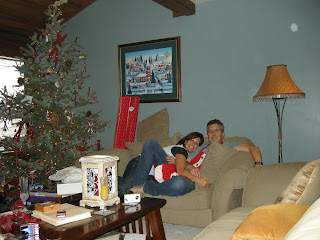 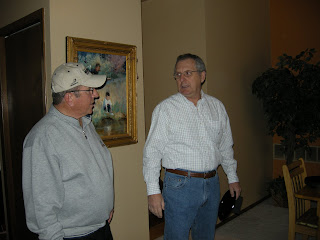 My two husbands spent some time bonding. Isn't that what Christmas in 2008 is all about? 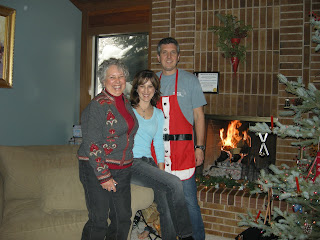 Too bad I have such a dorky smile on my face; otherwise, we would have a nice portrait of me and my two oldest children by the Christmas fire. Ryan & Keicha can still eat all afternoon and show the effects! 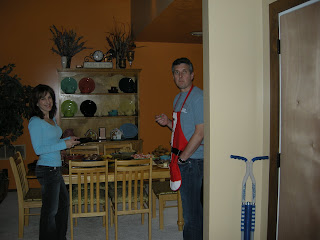 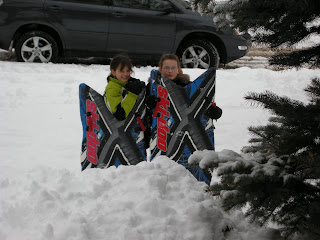 Gillian and Regan went sledding. It was a perfect day for that. 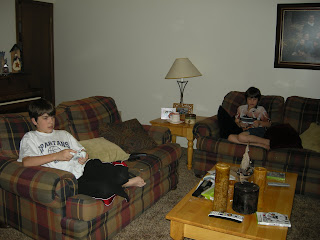 Parker and Bridger continued to play with their electronic toys in the basement family room. Bridger asked me the next day what I had given him because he forgot. My answer: "What did you do all day Christmas?" He said, "play with Mario DS auto racing." I said, "Ok, well that is what I gave you!" I guess he liked it.
The boys couldn't seem to get away from the new toys. This meant Ryan worked off some of his Christmas dinner by shoveling the driveway. 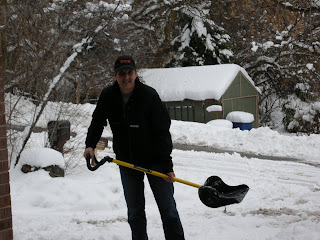 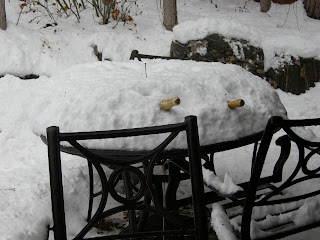 Refrigeration Utah style: I guess Stephanie ran out of room in the fridge.

Below is the view of Ryan & Stephanie's backyard from the family room. Almost looks like a Christmas card, doesn't it? I always say one is almost guaranteed a Norman Rockwell Christmas in Utah. 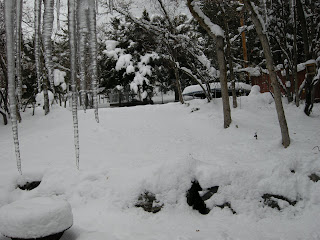 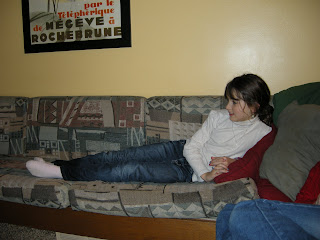 The beautiful, inside and out, Regan is shown above. She is relaxing and getting ready to watch "Momma Mia" with the girls: Gillian, Keicha, Stephanie & Me. (Please note Keicha's new ring that I got her in Santa Fe.) The boys continued to play their electronic games. 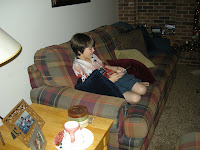 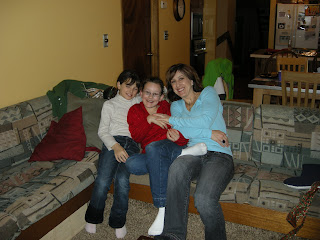 Alas, the sun began to dip into the snowy Utah sky, and it was the end of the day that is now just a treasured memory. Thanks Ryan, Stephanie, Parker, Regan, Bridger, Keicha and Gillian for such a wonderful day! And, thanks Jim, for making the trip. The snow and wind across Wyoming getting there was terrible, and my husband really doesn't like driving in the snow that covered Ogden streets, but he made sure I had a great Christmas. That's only one reason why I love him. 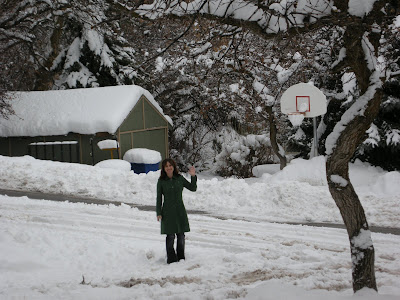 Keicha waves; always in fashion, even her coat is color coordinated with the garage across the street from Ryan's!

Good-bye! It was a very Merry Christmas. I hope it will be an even better New Year!
Posted by Sally Wessely at 11:47 AM