Don’t be Fooled by April

In March and in April, the daffodil heralds the coming of spring.  For some, spring is a difficult season.

For some, April truly can be the “cruelest month.”

As I look back over the springtimes of my life, I associate this season of life with daffodils.  Today, I’d like to use this flower, this motif for my life, to remind us all not to be fooled by April.  It has long been known that the coming of spring also increases the risk of suicide.  This is a difficult topic to write about, and to read about, but today, I think as we look forward to warmer days ahead, we also should be vigilant and watch for an increase in suicidal thoughts and behavior.

As a child, I once picked daffodils and pretended they were the mouthpieces mounted at the top of a candlestick telephone.  I called them “telephone flowers.”  They became a favorite very early in my life.

Yes, I am old.  Many of you might not even know what a candlestick telephone is.  Google it.  You might then see why my imaginative mind saw the bright jonquils blooming in the front yard of my childhood home as play telephones. 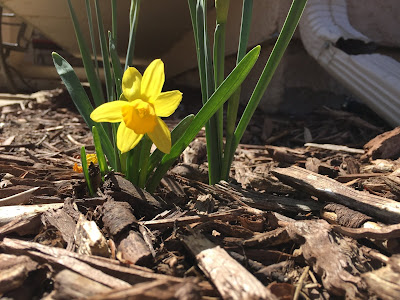 As a very young person, I began to think of them as my flower, the one that symbolized my optimism about life.  They reminded me that there was always new life that would spring forth no matter how dark, cold, and bitter the winter had been.  I lived in the mountains of Colorado as a teen.  The snow was deep, and cold, and some years did not melt until spring itself was nearly over.  Bundled in winter clothes, leaving the cold mountain hilltops behind, we would sometimes travel to the land of springtime found at lower elevations for a short visit to see my grandmother.  I still remember the joy I would feel when I saw daffodils blooming because I knew that surely spring would find us soon, even in the mountains.

When I think back to my first years of adulthood,  in my mind’s eye, I see the driveway leading to my parent’s home lined with blooming daffodils when I first met and fell in love with the man I would marry over fifty years ago.  Perhaps, that showy burst of bright color was partly to blame for the optimism and excitement I felt that spring when love was new and I unable to see anything but happy possibilities. 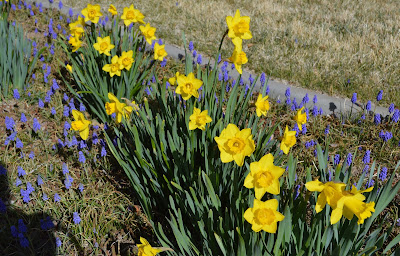 One April morning 43 years ago, I was awakened by labor pains.  As my husband and I pulled out of our own driveway to head to the hospital, I took note of the daffodils blooming in my yard.  Later, in my journal I recorded the events of the day when my fourth child and third daughter was born by writing, “The daffodils blooming as I headed off to the hospital to give birth to this beautiful daughter seemed to say, “You are having a spring baby and all is right with the world.” 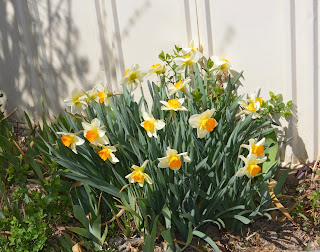 Their message to me has always been a message of joy, renewal, rebirth, life after death.

That love affair that began so many years ago when the daffodils were blooming led to marriage, the birth of five children, and a bitter divorce.

My love for daffodils did not change.

Dishes, bowls, vases, picture frames, tablecloths, I have many that are decorated with the daffodil motif.  They are brought out every spring to brighten my days and my home. 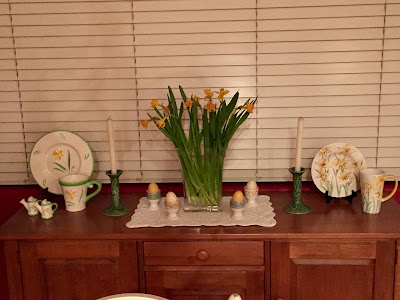 Once when that springtime baby born in April was grown, she went to Dublin, Ireland, in the spring.   While there, she came across a field of daffodils and had herself photographed sitting among them so she could send the photo to me. 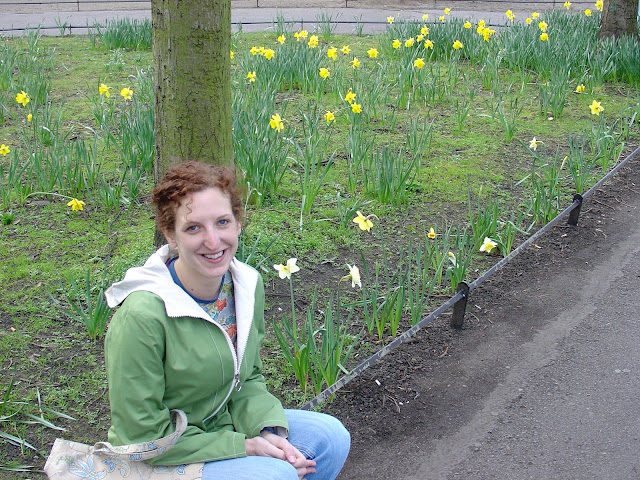 There she is dressed in green, her favorite color, a color she wore so well, sitting among the daffodils, and thinking of me as she smiled for the camera so that the moment could be recorded and sent to mom as a keepsake of her trip to Ireland.

I think that for some of us, some symbols, some motifs, some flowers carry powerful messages for us throughout our lives.  I think of the happy memories that are created as we collect pictures in our minds of times when those symbols bring us great joy, peace, hope, or comfort.  Daffodils have always been that symbol for me.

The symbol, the flower, does not in and of itself hold power in my life, but rather, the power lies in meaning I have assigned to it. 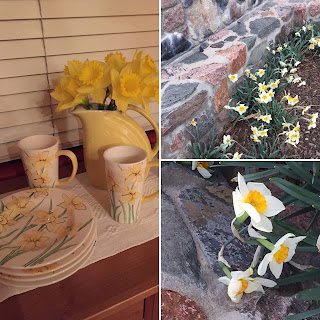 When, that April baby, the one born when the daffodils were blooming, my beautiful daughter Julie Ann, took her life, it was in May of her thirty-fourth year.  She had been  with me when the daffodils were blooming for one last Easter celebration just weeks before her death.   The family had come together to hunt for eggs filled with candy, color Easter eggs, and celebrate her birthday.  The last one she would ever celebrate.

She sat on the grass that was just beginning to turn green and posed for one last photo with her sisters.

I did not know that I would never see her alive again when I snapped another photo, the one I took later in the day of just her with her dog Phoenix.

I snapped that photo, never dreaming that within a very short amount of time, I would have to pick out a headstone for her final resting place and wonder just what I would put on that stone.  Her name.  Her birth date.  Her death date.  All of that was hard enough.  Still, I wanted something else there on that stone, something that spoke to me.  A flower?  Would a flower be nice on that stone?  Sadly, none of us could remember just what her favorite flower had been.  Had she ever said?  If we had known, I guess I could have had that flower engraved upon that stone, but I honestly didn’t know what her favorite flower was, and so I had a daffodil carved next to her name.

Daffodils are supposed to have bright color, and they are supposed to “flutter and dance in the breeze” as they are characterized by Wordsworth.  They are not supposed to be carved in stone, but I needed some sort of reminder that my beautiful girl had been bright and beautiful and youthful and had always reminded me of spring when I looked at that cold stone that marked her death.  I needed something to remind me that there was life after death.

The season of grief is one where flowers do not bloom in one’s heart and soul except when one remembers times when flowers bloomed when the one we grieve was with us.

I am now entering the ninth spring since Julie left us.  Daffodils again cheer my heart and bring me comfort.  They speak to me joy, and renewal, and hope, and the beauty that comes after a long, dark, cold, winter.  They speak to me of life, life for now, and life after death.

I am not the same woman I was when I first became acquainted with unspeakable loss.

One of the first things I wrote after Julie’s death was that I hoped to integrate her life and death into my life in a way that was healthy, honest, and truthful.  I did not want to wall of that part of my life which brought me deep  pain.  I did not want to compartmentalize anything about my life.  I wanted to integrate all of the parts into a whole that had meaning and healing and purpose.  Julie would want that for me.

Last Easter, I gave a small pot of miniature daffodils as a gift to someone I loved.  When I left to return home after my Easter visit, I was told, “Take the flowers with you.  I don’t want them.”  And so, trying not to be hurt, I did just that.  I took the flowers with me. 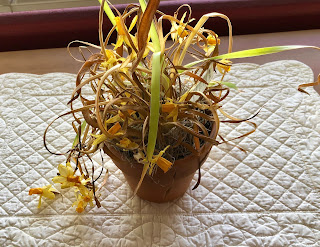 Soon the blooms were dead and began to dry out.  For some reason, I could not throw that plant away.  Instead, I marveled at the beauty of the shell of the bloom that  was left behind.  The color was lighter yellow than the color had been when the plant was in full bloom.  The shapes were reminiscent of the blooms when they were in their most beautiful state.  I thought they were still beautiful in this altered condition. 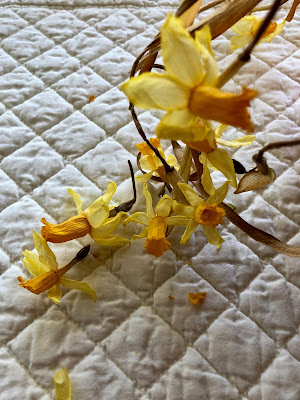 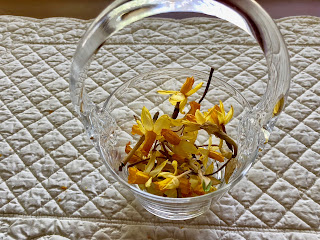 I took this basket out again this spring.  It sat among the fresh daffodil bouquets for several weeks.  I kept asking myself why I kept those dried flowers and what meaning I could find in them.

Finally, it came to me.

Spring is hard for so many.  If one is suicidal, or depressed, or suffering from mental illness, one just might not see daffodils and the coming of spring the way I do.  The depressed, the one struggling,  might not see hope, optimism, and happy sunny days ahead when spring arrives.

I knew from my study of depression, mental illness, and because of the knowledge I had learned about suicide, that many are at risk for suicide more in the springtime of the year than at any other time of the year.

Where I see possibilities for happier days ahead where the flowers will again bloom, others see dried out dreams and memories from yesterday and a future that seems fruitless and not worth living.

If I could change one thing, it would be to have been aware of my daughter’s true state of mind in that last spring of her life.  I would ask her those hard questions that I had asked her before in times when she expressed suicidal thoughts.  I would ask how she was really doing.  I would ask if she were thinking of harming herself.  I would do anything I could to get her the help she needed in her darkest hour.

This spring, in her memory, I ask you to think of those you love whom might be at risk of suicide.  Know the risks.  Know the signs.  Ask the hard question.  Make that phone call.  Get help for them and for you so you can best help them.

Please visit the American Foundation for Suicide Prevention and educate yourself about the risk factors and warning signs that someone you know, or someone you love, might need your help.

Don't be fooled by April.  Not everyone will experience spring the same way.

Posted by Sally Wessely at 9:06 PM